Scientific Name: Tympanuchus cupido pinnatus
Other/Previous Names: Tympanuchus cupido
Taxonomy Group: Birds
COSEWIC Range: Alberta, Saskatchewan, Manitoba, Ontario
COSEWIC Assessment Date and Status Change: December 2021
COSEWIC Status: Extirpated
COSEWIC Status Criteria:
COSEWIC Reason for Designation: This grassland bird formerly occurred in mixed and tallgrass prairie habitat in parts of Alberta, Saskatchewan, Manitoba, and Ontario, but has not been observed in Canada since 1987. Although it persists in the Great Plains of the United States, it is rare and declining in the states bordering Canada, making immigration from there unlikely. Key threats to re-establishment of the species in Canada are loss and degradation of habitat from agricultural expansion and fire suppression, and hybridization with Sharp-tailed Grouse.
COSEWIC History of Status Designation: Last reported in 1987. Designated Endangered in April 1978. Status re-examined and designated Extirpated in April 1990. Status re-examined and confirmed in May 2000, November 2009, and December 2021.
SARA Status: Schedule 1, Extirpated
Date of Listing (yyyy-mm-dd): 2003-06-05 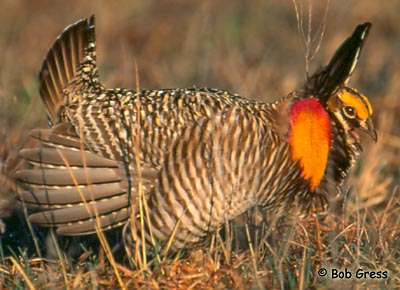 The Greater Prairie–Chicken is a medium–sized grouse closely related to the Sharp–tailed Grouse. The Greater Prairie–Chicken is slightly larger than the Sharp–tailed Grouse and differs from the latter by barred underparts, rounded tail, presence of elongated dark neck feathers, and golden neck sacs in males. (Updated 2017/05/24)

The Greater Prairie–Chicken formerly occurred in Alberta, Saskatchewan, Manitoba, and Ontario, but was extirpated from most of its Canadian range by the mid–20th century. Disjunct populations of this species still occur in the United States (North Dakota, Minnesota and Wisconsin, south to Kansas, Oklahoma and Missouri, west to Colorado and east to Wisconsin and Illinois). (Updated 2017/05/24)

The Greater Prairie–Chicken was originally common in native prairie. In the United States, its habitat is now composed of remnant prairie, often mixed with cropland, in the tall–grass prairie and the mixed–grass prairie biomes where land–use changes have supplemented food and cover. This species is highly area–sensitive, and is consistently absent from small fragments of otherwise suitable habitat. At least 5000–6000 ha of suitable habitat are required to support a minimum viable population. The primary cause of habitat loss for the Greater Prairie–Chicken in Canada was the conversion of native prairie for crop cultivation and pasture. (Updated 2017/05/24)

In early spring, males congregate on relatively small display sites or leks, and actively defend territories from other males. Females attend leks and usually mate with the dominant male, and then disperse to nesting sites. Nests are built on the ground under cover of grass, and the clutch size is on average 11–12 eggs. Incubation lasts 23–25 days. The young are precocious, and leave the nest shortly after hatching. A portion of the population is resident while others move 12–170 km between breeding and wintering areas during October–November. The species possesses high annual mortality. (Updated 2017/05/24)

Threats to the Greater Prairie–Chicken include habitat fragmentation, resulting in population isolation and loss of genetic variability, competition and hybridization with Sharp–tailed Grouse, nest parasitism by exotic Ring–necked Pheasants, and predation. The main limiting factor for the recovery of the Greater Prairie–Chicken in Canada appears to be a shortage of extensive, lightly grazed blocks of grassland. (Updated 2017/05/24)