In Canada, this distinctive woodpecker breeds only in British Columbia. Its Canadian population is extremely small, likely fewer than 100 individuals. The population is exposed to ongoing threats from habitat loss and degradation. Rescue from the U.S., where populations are sparse, is expected to be limited due to U.S. population declines and restricted remaining habitat in Canada.
COSEWIC History of Status Designation: Designated Threatened in April 1992. Status re-examined and designated Endangered in November 2000 and November 2010.
SARA Status: Schedule 1, Endangered
Date of Listing (yyyy-mm-dd): 2003-06-05 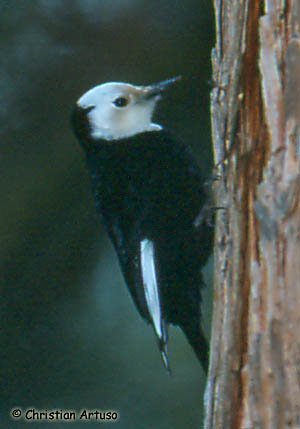 The species occurs from western Canada south through eastern Washington and northern Idaho to southern California and Nevada. In Canada, it only occurs in extreme southern British Columbia. There have been no significant changes in its distribution through time. The White-headed Woodpecker has always been rare in the northern part of its range, with no detectable change in its Canadian range over the past century. The Canadian population of the species is very difficult to quantify because the woodpeckers occur in low densities and tend to occupy different areas each year. Population estimates fluctuate among years. Between 1965 and 1975, the species appears to have been more common than it had ever been before, or since. The reason for this trend is unknown. Though exact numbers are not available, the species is present in Canada every year and a few pairs probably nest here annually.

White-headed Woodpeckers inhabit and are dependent on pine forests, particularly those dominated by Ponderosa Pine, Jeffrey Pine, Sugar Pine and Coulter Pine. It tends to be rare in forests that have only one of these species (e.g. Ponderosa Pine forest of British Columbia) but can be common in forests where two or more of these pine species occur. Old-growth forest are preferred because the White-headed Woodpecker needs high densities of both snags for roosting and nesting sites. In addition, large, mature pine trees produce more cones (a vital food source) than younger trees. The quality of the White-headed Woodpecker’s habitat has declined over the last century.

White-headed Woodpeckers are non-migratory birds that are territorial and monogamous. They excavate holes in dead or dying trees (usually conifer snags) for both roosting and nesting purposes. The species usually has only one brood per season. Although clutches contain four to five eggs, on average only one to three young per nest fledge successfully. In Canada, young have been observed in nests anywhere from the end of May through to mid July. The woodpecker’s diet includes a variety of insects in the summer and is composed primarily of seeds, especially large pine seeds, in the fall and winter.

The main threat to the White-headed Woodpecker appears to be a lack of high quality habitat. Although the quantity of habitat has remained fairly stable, the quality has declined. Most of the Ponderosa Pines in British Columbia have been removed by the logging industry, and fire suppression has led to denser forests of younger trees. These forests have few snags for roosting and nesting, and produce fewer pine cones used by this species for winter food.

The White-headed Woodpecker is protected by the federal Migratory Birds Convention Act. Under this Act, it is prohibited to kill, harm, or collect adults, young, and eggs. It is also protected under the British Columbia Wildlife Act. Under the Forest and Range Practices Act, wildlife habitat areas can be designated for Identified Wildlife, which includes the White-headed Woodpecker. Within these areas, forest companies must comply with logging practices that would benefit this species, such as removing the small trees and leaving the snags and larger trees.

Summary of Progress to Date The White-headed Woodpecker recovery team has taken several approaches to recovering the species, including outreach activities to help the public identify White-headed Woodpeckers and learn about the habitat value of standing dead trees (snags), seeking protection for remaining old-growth Ponderosa pine stands, and habitat restoration of young, dense stands. White-headed Woodpeckers have large territories (400 ha or more) and are so rare in British Columbia that cost-effective surveys are difficult. However, observations in the field by landowners and others indicate that the species remains present, albeit extremely rare, in the south Okanagan. Protection of old-growth Ponderosa pine forests and restoration of young forests remains urgent to the recovery of this and many other species. The recovery team is aiming for 10,000 ha of suitable habitat (some protected, some managed for habitat values), which would support up to 25 pairs of White-headed Woodpecker. Summary of Research/Monitoring Activities Habitat restoration has taken place in an adaptive management framework, in which the effectiveness of alternative restoration treatments is tested. Such studies have shown that restoration treatments such as thinning (removal of smaller trees) lead to the growth of larger Ponderosa pines. Larger Ponderosa pines have been shown to produce more seeds, a key food source for the woodpeckers, and provide preferred nesting habitat for woodpeckers and other cavity nesters. Snags are important habitat attributes that are often in short supply for White-headed Woodpeckers, as well as many other species. Killing trees by girdling them has proven to have limited effectiveness in creating snags, because of the lack of initial decomposition inside the tree. Therefore, researchers are working to develop techniques that create better snags, such as inoculating trees with naturally occurring fungi. In 2004 and 2005, a study was initiated to determine the effect that wildfires in 2003 had on White-headed Woodpecker habitat. Habitat attributes are being compared between sites that experienced burns of varying severity as well as unburned sites. The recovery team is mapping White-headed Woodpecker habitat using remotely sensed data (satellite images), which have been calibrated by visiting a sample of the photographed sites and collecting on-the-ground habitat data. Summary of Recovery Activities The recovery team is encouraging landowners and firewood collectors to recognize the value of snags and large Ponderosa pine trees to White-headed Woodpeckers and other wildlife. Furthermore, the recovery team is working with the forestry company Weyerhaeuser to encourage habitat restoration in key areas for White-headed Woodpeckers. Weyerhaeuser recently agreed to develop management guidelines for forestry work it conducts within the woodpecker’s range. Four sites, totaling approximately 200 ha, have been provincially designated as wildlife habitat areas for White-headed Woodpecker. These sites are managed through silvicultural techniques such as partial cutting to maintain or enhance habitat value for the woodpecker.