Western Canada supports a small fraction of the global population of this charismatic nocturnal raptor that preys on small rodents. Owing to its intolerance of cold climates and deep snow cover, populations in Canada are restricted to parts of southern British Columbia and southwestern Ontario. The Western population in British Columbia is small and threatened by ongoing loss and degradation of grassland and old field habitat to intensive agriculture and urbanization and by the conversion of old wooden barns and other rural buildings to more modern structures. This owl is also exposed to increasing levels of road-kill mortality owing to expansion of the road network and increases in traffic volume.
COSEWIC History of Status Designation: The species was considered a single unit and designated Special Concern in April 1984. In April 1999, the Western and Eastern populations were assessed separately. The Western population was designated Special Concern. Status re-examined and confirmed in November 2001. Status re-examined and designated Threatened in November 2010.
SARA Status: Schedule 1, Threatened
Date of Listing (yyyy-mm-dd): 2003-06-05 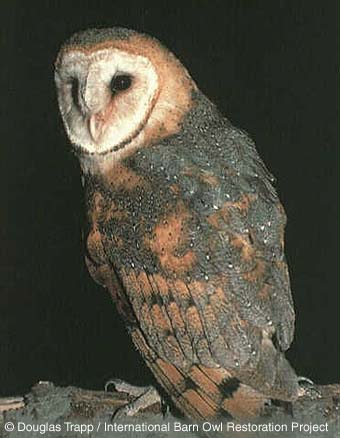 The Barn Owl (Tyto alba) is a medium-sized, long-legged owl with a distinctive, heart-shaped facial disk and dark eyes. Its upper body colour is variably rufous, golden or buff, lightly to heavily vermiculated with grey, and with tiny white and black spots. The lower body colour is white to buff, unspotted to heavily spotted with dark brown or rust. Flight feathers on the wings and tail have dark brown bars. Within the climatic tolerances of its breeding range, the Barn Owl is a good ecological indicator of native and agricultural grasslands. Because it is associated with traditional small-scale mixed farming, trends in its population reflect intensification of agriculture. There have been global declines in this species as a result of habitat loss, toxic chemicals, human disturbance and severe winters. The species is economically beneficial to farmers in its role as predator of rodent populations. The Barn Owl is also a popular and emotive species to the general public. (Updated 2017/05/25)

The Barn Owl is one of the most widely distributed of all land birds and is found on every continent except Antarctica. Its northern distribution is limited by winter temperatures. As such, in the Americas, it breeds locally in parts of southern Canada and the northern U.S., but becomes much more common and ubiquitous south through the southern U.S., Mexico and South America. There are two populations (designatable units) in Canada. The Western population is resident year-round in southern British Columbia, mostly in the southwestern corner of the province. It occurs locally on southeastern Vancouver Island from Victoria to Nanaimo, and rarely north to Campbell River and the Gulf Islands. It is most common in the Fraser Valley east to Hope, but is rare and sporadic in the central/southern interior. The Eastern population is very small and found sporadically in southwestern Ontario (mostly within 50 km of the Lower Great Lakes). Definitive evidence for breeding has not been reported in Québec. (Updated 2017/05/25)

Barn Owls breed for the first time at 1 year old. Life-span is, however, typically short (2-3 years on average). Second broods in one year are rare in temperate regions like Canada, and usually coincide with abundant prey. Clutch size is variable depending on latitude, but usually ranges between four and eight eggs. Fledglings become independent at about 120 days of age. If there is adequate suitable foraging habitat and linkage to source populations, Barn Owls can respond well to nest box programs, but the success of such programs varies regionally. (Updated 2017/05/25)

Loss of foraging habitat due to marked changes in agricultural practices and other land uses threaten both the Eastern and Western populations. The availability of nesting sites has also severely declined, owing to the conversion of old, open wooden farm buildings to modern, closed metal structures. The extent to which this trend has been mitigated by recent nest box programs is equivocal; some success has been documented in British Columbia but not in Ontario. Barn Owls are also particularly susceptible to being killed on roads, which represents a significant cause of mortality. Finally, because Barn Owls are poorly adapted to low temperatures and deep snow, bouts of severe winter weather act to limit populations in Canada. (Updated 2017/05/25)

The Barn Owl Western population is protected by the British Columbia Wildlife Act. Under this Act, it is prohibited to kill, harm, or collect adults and eggs, or to destroy active nesting sites.