This sky-blue forest songbird is at the northern edge of its breeding range in Canada. Relying on relatively large tracts of undisturbed hardwood forest, it has rather specialized habitat requirements on both its breeding and wintering grounds. Its population has been experiencing significant declines across most of its range since the 1960s and the present Canadian population is estimated at about only 1000 individuals. These declines are believed to be driven mostly by loss and degradation of this species’ wintering habitat, which is restricted to montane forests in the northern Andes of South America. It is also threatened by habitat loss and degradation on its breeding grounds. There is evidence for continuing declines. Also, new information on demographics suggests that chances for population rescue in Canada are lower than previously thought.
COSEWIC History of Status Designation: Designated Special Concern in April 1993. Status re-examined and confirmed in May 2003. Status re-examined and designated Endangered in November 2010.
SARA Status: Schedule 1, Endangered
Date of Listing (yyyy-mm-dd): 2005-01-12 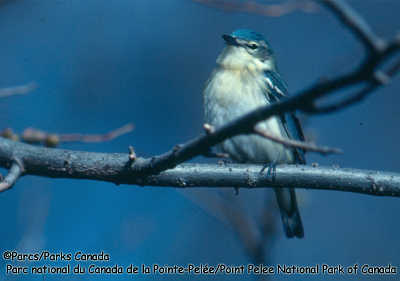 The Cerulean Warbler (Dendroica cerulea) is a small wood-warbler. The adult male is sky blue above and white below, while the female is blue-green above and whitish below. Both sexes have two prominent white wing-bars and white tail spots. The species has generated considerable public, scientific and conservation interest recently due to its beauty, habitat specificity, and international conservation concerns. It is considered an umbrella species that reflects the maintenance of populations of other bird species that require mature deciduous forest habitats. [Updated by COSEWIC- Nov. 2010]

This species breeds in the deciduous forests of eastern North America but has a patchy distribution. The Canadian breeding range consists of two main geographic clusters in southwestern and southeastern Ontario, plus a small number of breeding individuals in southwestern Quebec. It winters in a relatively narrow elevational zone in the eastern Andes of South America, from Venezuela to northwestern Bolivia. The Canadian population is estimated to be 433-543 pairs (866-1086 mature individuals), most of which are found in the Frontenac Axis region of southeastern Ontario. The most recent global population estimate is 625,000 mature individuals. Hence, Canada supports roughly 0.2% of the global population. The Cerulean Warbler’s North American population experienced an average decline of about 2.9% per year from 1966 to 2006. In Ontario, recent breeding bird atlas work suggests a non-significant decline of 30% province-wide over a 20-year period (1981-85 and 2001-2005), which is equivalent to a decline of at least 16% over 10 years. More severe declines have occurred in the province’s Carolinian region (at least 24% over 10 years). In Quebec, Cerulean Warblers have disappeared from five of six known sites occupied since the 1960s. Overall, the Canadian population has declined by at least 16% over the past 10 years. The potential for rescue is believed to be low, owing to ongoing population declines in the U.S. [Updated by COSEWIC- Nov. 2010]

On the breeding grounds, Cerulean Warblers are associated with large tracts of mature deciduous forest with tall trees and an open understory. They are found in both wet bottomland forests and upland areas. At a finer spatial scale, canopy configuration (e.g., foliage stratification, gap distribution, tree species distribution) are predictors of habitat suitability. On the wintering grounds in the Andes, they occupy a rather narrow elevational range (roughly 500-2000 m above sea level). Here, they are found principally in mature and relatively undisturbed humid forests, but will also use rustic shade-coffee, cardamom and cacao plantations that retain native trees. [Updated by COSEWIC - Nov. 2010]

Female Cerulean Warblers lay 2-5 eggs per clutch. Only a single brood is produced per year. Generally 2-3 fledglings are produced per breeding pair and about 75% of pairs have successful nests. The species appears to have low between-year survivorship, likely due to a combination of mortality experienced during long-distance migration and low survivorship on the wintering grounds. While demographic studies across the species’ breeding range have shown that nest success and fecundity in eastern Ontario are among the highest in North America, it appears that immigration from the U.S. is required to maintain the Canadian population. [Updated by COSEWIC - Nov. 2010]

Habitat loss and degradation on the wintering grounds are believed to be the primary threats. Massive deforestation of primary montane forests of the northern Andes has occurred in recent decades, and this threat continues. The major threats on the breeding grounds are also related to habitat loss and degradation caused by some forms of intensive logging and the conversion of mature forest to agricultural lands. Habitat fragmentation, which increases nest parasitism by cowbirds and the risk of nest depredation, also seems to be an important threat. Other threats include predicted increases in catastrophic weather events (e.g., severe ice-storms and hurricanes) on the breeding grounds and during migration, decreasing habitat quality due to exotic forest pathogens and forest insect outbreaks, and increasing risks of collision with tall structures during migration. [Updated by COSEWIC - Nov. 2010]