Scientific Name: Braya fernaldii
Taxonomy Group: Vascular Plants
COSEWIC Range: Newfoundland and Labrador
COSEWIC Assessment Date and Status Change: November 2012
COSEWIC Status: Endangered
COSEWIC Status Criteria: A3bce; B1ab(iii,v)+2ab(iii,v); E
COSEWIC Reason for Designation: This small perennial plant, endemic to the limestone barrens of the Great Northern Peninsula of Newfoundland, is at increased risk over its limited range due to numerous threats. Ongoing habitat loss and degradation, combined with a non-native agricultural moth, result in low rates of survival and reproduction. These threats and the additional impact of climate change lead to the prediction that the species will go extinct in the wild within the next 80 years.
COSEWIC History of Status Designation: Designated Threatened in April 1997. Status re-examined and confirmed in May 2000. Status re-examined and designated Endangered in November 2012.
SARA Status: Schedule 1, Endangered
Date of Listing (yyyy-mm-dd): 2003-06-05 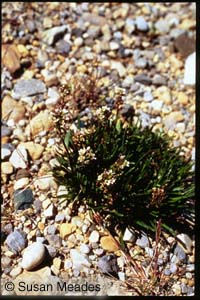 Fernald’s Braya (Braya fernaldii) is a small (10 cm tall) herbaceous perennial in the mustard family Brassicaceae. It has fleshy, dark green to purplish, linear spatulate (spoon-shaped) leaves arranged in rosettes and four-petalled white to pinkish or purplish flowers. Fernald’s Braya is very similar morphologically to Long’s Braya (listed as Endangered under the Species at Risk Act) but it is shorter and has narrower petals, smaller and more purplish sepals, and pubescent leaves and fruit. It is one of four vascular plants endemic (only known from) to the island of Newfoundland. (Updated 2017/07/27)

Fernald’s Braya is endemic to the Limestone Barrens ecosystem on the island of Newfoundland, Canada. It is known from 16 populations that span about 150 km of coastline. It is likely that Fernald’s Braya occurs sparsely throughout the almost continuous strip of limestone barrens at the northern (70 km) end of its range. (Updated 2017/07/27)

Fernald’s Braya is a calciphile (requires calcium-rich soils) that inhabits the Limestone Barrens-a mosaic of patches of shallow nutrient-poor calcium-rich soils in frost-shattered barrens, bedrock outcrops, fine-grained substrate, and tundra-like heaths within 1.5 km of the coast, and situated 13 to 15 m above sea level. Frost action, soil erosion from heavy precipitation, and wind erosion maintain open areas in which Fernald’s Braya seedlings germinate. Fernald’s Braya is also capable of inhabiting undisturbed limestone barrens where frost action has formed patterned substrate, such as sorted stripes and polygons, or anthropogenically degraded limestone barrens, such as abandoned limestone quarries and roadways, and levelled areas of land around utility lines. These areas consist of homogeneous gravel substrates with no patterned substrate and low species diversity. (Updated 2017/07/27)

Fernald’s Braya is a long-lived (likely 20+ years) perennial whose life cycles can be divided into eight stages: seeds, four seedling stages (year one to four), and three adult stages (vegetative, single rosette flowering, and multiple rosette flowering). Flowering begins in mid-June and plants produce fruit by mid-August. Each flower produces on average 10-16 small (1-1.5 mm), round seeds that need to undergo a period of cold stratification and be scarified before they will germinate. Fernald’s Braya growingon anthropogenically degraded habitat move more quickly through their life cycle and have a higher reproductive output than individualsgrowing on undisturbed habitat, but they also have higher mortality rates. Fernald’s Braya are not known to reproduce asexually. (Updated 2017/07/27)

Past habitat loss through quarrying, road construction, and community expansion was the most significant and widespread threat to Fernald’s Braya, but currently it is the maintenance of that infrastructure that is a threat. These large-scale disturbances left some areas heavily degraded but still capable of supporting Fernald’s Braya (i.e., represent anthropogenically disturbed populations). Populations on such anthropogenically degraded habitat may threaten the viability of undisturbed populations by acting as reservoirs for pests and pathogens. Fernald’s Braya populations are negatively affected by an introduced, pesticide-resistant, agricultural insect pest and two pathogens, all of which decrease seed set and increase mortality rates in each population. Summer and winter air temperatures on the limestone barrens increased from 1991 to 2002 and mean annual air temperature is predicted to increase another 4?C by 2080. These climatic changes could reduce winter snow cover, alter the frost-sorting processes characteristic of the limestone barrens, and affect the population distribution and abundance of pests and pathogens. Surveys conducted within the distribution of Fernald’s Braya found that 59-76% of respondents thought off-road vehicles were causing more damage than any other human activity. Dumping garbage, piling and cutting wood, and drying fishing nets can cause Fernald’s Braya mortality and decrease habitat quality, but these activities are more localized and less frequent. Hybridization with the closely related Long’s Braya is possible but considered rare. Until roads degraded the landscape, these species did not co-occur and there was no indication of hybridization; however, recent research suggests hybridization is possible in populations on anthropogenically degraded habitat where these species co-occur. (Updated 2017/07/27)