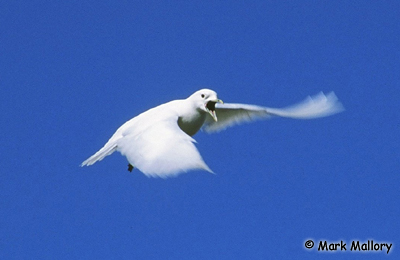 The Ivory Gull is a small seabird with black legs. It is distinctive at all ages but it is particularly striking in its pure white adult plumage. Juveniles have a dusky face and chin and black spots on the breast and along the flanks and tail. In adults, the bill is generally slate blue at the base, becoming pale yellow and tipped with red; in juveniles the bill is darker. Its round chest, short legs, and rolling gait give the Ivory Gull a pigeon-like appearance when on the ground. However, despite its stocky body, in the air it has a graceful and agile flight.

The Ivory Gull nests at certain specific sites in the High Arctic. There are small, scattered colonies in the Canadian Arctic, Greenland, Spitsbergen and the northern islands and archipelagos of Russia in the Kara Sea. In Canada, the species breeds exclusively in Nunavut, where there is permanent drift ice and open water. The Ivory Gull may venture inland to find a suitable nesting site. Consequently, colonies are concentrated round Jones and Lancaster sounds on southeastern Ellesmere Island, eastern Devon Island, and the Brodeur Peninsula of northern Baffin Island. One outlying colony exists farther west, on Seymour Island, off the northern coast of Bathurst Island. The wintering grounds of the Ivory Gull are poorly known, but they are thought to be along the southern edge of the pack ice in the North Atlantic and North Pacific oceans. The Ivory Gull spends the winter on the pack ice of Davis Strait, the Labrador Sea, the Strait of Belle Isle and the northern Gulf of St. Lawrence. It is occasionally seen along the eastern coasts of Newfoundland and Labrador, particularly the Great Northern Peninsula of Newfoundland, and on the Lower North Shore of Quebec. Until recently, the eastern Canadian Arctic was thought to support 20 to 30% of the entire global breeding population and to contain colonies of global importance. However, aerial surveys conducted during the first two weeks of July in 2002, 2003, 2004 and 2005 suggest that the Canadian breeding population has decreased. During those surveys, 31 locations where colonies had been reported in the 1970s and 1980s were resurveyed. Only 9 of these colonies showed signs of activity. The total number of Ivory Gulls detected at colonies on Ellesmere, Devon, Cornwallis, Seymour and Baffin islands was only 88 in 2002, 319 in 2003, 305 in 2004, and 210 in 2005, despite the broadest geographic search effort ever for this species in Canada. These values represent an apparent population decrease of approximately 80% since the 1980s. Surveys at sea provide further evidence of decline: in the High Arctic in August, four times more Ivory Gulls were seen 1993 than in 2002. Long-term Inuit residents of four communities in the Canadian Arctic also report dramatic decreases in the number of Ivory Gulls observed. In addition, there is evidence from seal hunters that there are fewer Ivory Gulls wintering in the Labrador Sea than there were in the 1970s. If the decline is real and continues at the same rate, the Canadian breeding population is expected to decrease by a further 62% between 2005 and 2015, to a total of less than 200 birds.

Ivory Gulls require breeding habitat that is safe from terrestrial predators, particularly the Arctic fox. They nest near waters that are partially free of ice in late May and early June. Breeding colonies can be found inland in remote, desolate sites where there are no other animals. Nunavut contains a number of types of nesting habitat used by the Ivory Gull. The species nests on flat terrain or on sheer cliffs above ice sheets, often several hundred metres above the water. It also nests on nunataks (eroded outcrops of granite or other rock) on Ellesmere and Devon islands and on vast gravel limestone plateaus devoid of vegetation on Seymour Island and the Brodeur Peninsula. Outside the breeding season, Ivory Gulls live near the edges of pack ice or drift ice.

Ivory Gulls often return to their breeding grounds before the snow melts. Both mates work together to build the nest before the snow is completely melted. The nest is made of moss, lichens and grasses and is placed on the ground or on a cliff ledge. The female lays a clutch of one or two eggs. The parents take turns incubating the eggs for approximately 25 days. The Ivory Gull breeds only once a year, starting in its second year. Nestling survival depends on weather conditions, predation and human disturbance. The Arctic fox is the primary predator of the Ivory Gull. Individual Ivory Gulls are known to leave their colonies immediately after breeding and disperse to offshore foraging zones. Little is known about Ivory Gull behaviour and ecology away from the colony. Ivory Gulls appear to be relatively solitary at sea but they occasionally form small groups of 20 to 30 individuals. Like most gulls, the Ivory Gull is an opportunistic feeder. At sea, it is a surface feeder, foraging primarily on small fish, such as lanternfish and juvenile Arctic cod. During the breeding season, it also feeds on small mammals, such as lemmings. In addition, it scavenges the carcasses of fish and marine mammals killed by large predators, such as polar bears.

Although the Ivory Gull winters in association with pack ice in the North Pacific and North Atlantic oceans and breeds in extremely remote locations, it is not immune to threats. One of the many threats to the species is illegal shooting of adults, particularly for food in western Greenland during spring and fall migration. Natural predation is another limiting factor for these nesting birds. Arctic foxes and polar bears can destroy Ivory Gull colonies. Climate change constitutes a likely threat. The Ivory Gull has a strong year-round association with pack ice, and it is possible that a change in the extent or thickness of ice cover has resulted in the degradation of its foraging and wintering habitat in Baffin Bay and Davis Strait. Escalating diamond exploration and drilling activities also pose a threat to the Ivory Gulls that nest on the Brodeur Peninsula of Baffin Island. In addition, industrial activities that establish long-term camps for workers often attract mammalian and avian predators to regions from which they are typically absent. The presence of toxic pollutants, which accumulate in the bodies of Ivory Gulls that feed on contaminated prey, may also pose a threat. The impact of oil spills on Ivory Gulls wintering in Newfoundland and Labrador is not known, but there is every reason to believe that Ivory Gulls are at risk from this type of pollution at sea.

Summary of Progress to Date Ivory gull populations appear to be remaining at low levels on the breeding grounds. High Arctic communities of Nunavut have been involved in the status assessment and recovery of the Ivory Gull, through work using local knowledge, and consultations with federal government staff. The Quebec Lower Shore’s Community Species at Risk Project, the Newfoundland and Labrador Foundation, as well as the local communities and regional conservation organisations within Quebec and Newfoundland and Labrador are aiding in the recovery in the Ivory Gull. Efforts by these organisations and the Canadian Ivory Gull Working Group have aimed to increase the Ivory Gull’s population as well as to monitor and conserve its habitat. Collectively, these efforts have resulted in increased awareness and reporting of Ivory Gull sightings. Summary of Research and Monitoring Activities Surveys of Ivory Gulls in their high arctic breeding colonies of Nunavut have been undertaken between 2001-2006, documenting an 80% decline in the species population. Local ecological knowledge and sea-based surveys have corroborated the losses seen in the breeding colonies. Analyses of contaminants in Ivory Gull eggs have found high levels of mercury. Increasingly, reports of Ivory Gull observations from passengers or operators of Arctic cruise ships have begun to augment our knowledge of their distribution at sea. Also, work is underway with a mining company operating on Baffin Island to assess the responses of Ivory Gulls to disturbance from aircraft or people. This will assist in defining critical habitat for this species on its breeding grounds. Research and monitoring is underway which will assist in determining the critical habitat for the Ivory Gull. Preparation and distribution of volunteer observation kits (identification charts, logbook, instruction manual, proper release techniques, entanglement assistance number, species information and camera) to trained fishers, seal hunters, marine operators, and other volunteers monitoring species at risk will aid efforts to create an accurate database on the Ivory Gull. This information will be crucial to identifying important habitats, determine causes of mortality, and benefit the overall recovery effort. Networking between volunteers and recovery organisations will greatly increase the research and monitoring of the Ivory Gull and create a unique stewardship partnership between these organizations and various communities in Quebec and Newfoundland and Labrador for future recovery activities on species at risk in the area. Summary of Recovery Activities Ocean Day events aimed at local species at risk will help the general awareness of the public. Regional newsletters covering the recovery activities for the Ivory Gull and other species at risk in the area will assist in keeping volunteers and the public in the region informed of the progress in the recovery of this species. URLs: Parks Canadahttp://www.pc.gc.ca/progs/amnc-nmca/systemplan/especes-species/ivorygull_e.asp Canadian Wildlife Service: Ontario Regionhttps://www.on.ec.gc.ca/wildlife/wildspace/life.cfm?ID=IVGU&Lang=e The Birds of North America Onlinehttp://bna.birds.cornell.edu/BNA/gallery/Ivory_Gull_gallery.html Management Plan for the Ivory Gullhttp://www.env.gov.nl.ca/env/wildlife/wildatrisk/IVGU%20Canadian_mgmnt_plan.pdf