Scientific Name: Ixobrychus exilis
Taxonomy Group: Birds
COSEWIC Range: Manitoba, Ontario, Quebec, New Brunswick, Nova Scotia
COSEWIC Assessment Date and Status Change: April 2009
COSEWIC Status: Threatened
COSEWIC Status Criteria: A2b; C1
COSEWIC Reason for Designation: This diminutive member of the heron family has a preference for nesting near pools of open water in relatively large marshes that are dominated by cattail and other robust emergent plants. Its breeding range extends from southeastern Canada through much of the eastern U.S. Information on the population size and exact distribution of this secretive species is somewhat limited. Nevertheless, the best available evidence indicates that the population is small (about 3000 individuals) and declining (> 30% in the last 10 years), largely owing to the loss and degradation of high-quality marsh habitats across its range.
COSEWIC History of Status Designation: Designated Special Concern in April 1988. Status re-examined and confirmed in April 1999. Status re-examined and designated Threatened in November 2001 and in April 2009.
SARA Status: Schedule 1, Threatened
Date of Listing (yyyy-mm-dd): 2003-06-05 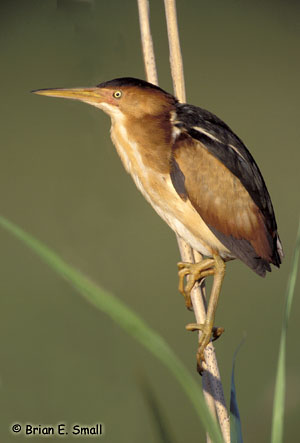 There are five subspecies of Least Bittern, Ixobrychus exilis. Since only the subspecies exilis breeds in Canada, it is considered a species in and of itself in this country.

The Least Bittern is the smallest member of the heron family in North America. Only 30 cm in length, it is no larger than an American Robin. Like the more familiar American Bittern, the Least Bittern hunches at rest and freezes when alarmed, with its bill stretched skyward. It has brown and buffy plumage, with broad buff streaks on its white underside, and a contrasting back and crown that is glossy black in adult males but lighter in females and juveniles. The buff undersides of its wings, which are especially obvious when the bird takes flight, distinguish this species from all other marsh birds. This small heron is seldom seen in its dense marsh habitat; it is most often detected by its call.

The Least Bittern breeds from southern Canada to South America, mainly in the eastern United States. It winters along the Atlantic coast, primarily in Florida and along the Gulf of Mexico, and in the region extending from California, Texas and Florida to Panama. In Canada, the Least Bittern has been observed in every province, but most individuals occur in Ontario. The species breeds primarily in southern Ontario, and in southern Manitoba, Quebec, New Brunswick and probably Nova Scotia. The Canadian population of Least Bittern is estimated at approximately 1500 pairs. Numbers appear to have declined in Canada and in the northern and central United States over the years. The degree of recent declines is difficult to assess, because the birds are difficult to detect, but bird atlas projects and marsh bird monitoring programs suggest a decline in Ontario of over 30% between 1999 and 2009. Trend information is currently lacking for other provincial jurisdictions; however, the majority of the Canadian population occurs in southern Ontario.

The Least Bittern breeds strictly in marshes dominated by emergent vegetation surrounded by areas of open water. Most breeding grounds in Canada are dominated by cattails, but breeding also occurs in areas with other robust emergent plants and in shrubby swamps. The presence of stands of dense vegetation is essential for nesting because the nests of Least Bittern sit on platforms of stiff stems. The nests are almost always within 10 m of open water. Open water is also needed for foraging, because Least Bitterns forage by ambushing their prey in shallow water near marsh edges, often from platforms that they construct out of bent vegetation. Access to clear water is essential for the birds to see their prey. This small heron prefers large marshes that have relatively stable water levels throughout the nesting period. Adults can raise nests somewhat to deal with rising waters, but persistent or sudden increases will flood nests. Conversely, drops in water level can reduce foraging opportunities and increase the species’ exposure to predators. Needs for wintering habitat are less specific, and appear to be met by a wide variety of wetlands—not only emergent marshes like those used for breeding, but also brackish and saline swamps. Habitat use during migration is poorly known, but presumably is similar to breeding and wintering habitat.

With its secretive habits and relatively impenetrable habitat, the Least Bittern is one of North America’s most poorly known species. This migratory species arrives on Canadian breeding grounds between late April and late May; by mid-May, calling and nesting begin. The Least Bittern is weakly territorial, sometimes nesting in small, loose colonies. First eggs are laid between mid-May and June, and incubated for 17 to 20 days. Young are fed in the nest for two weeks following hatching. Average clutch size is four to five eggs. Causes of nest failure are predation, nest flooding and abandonment, and nest collapse from wave action or wind. Some individuals can raise two broods in one season. Predators on adults include snapping turtles and raptors, with eggs and chicks being taken by snakes, turtles, Common Ravens, raptors, raccoons, American mink and other herons. Eggs and chicks are also pecked by Marsh Wrens. Diet has not been studied in detail, but Least Bitterns are thought to prey mainly on small vertebrates, including fish, snakes, frogs, salamanders, and occasionally, small mammals and passerine bird eggs or nestlings. Its diet is also believed to include large insects such as dragonflies, as well as leeches, slugs, crayfish and some vegetation. The Least Bittern migrates south from late August to late September. Although details of its migratory habits are unknown, it can probably travel considerable distances with each flight, given the ability of its European congener, the Little Bittern, to migrate non-stop across the Mediterranean Sea and the Sahara. Like all wading birds, the Least Bittern is particularly susceptible to oil poisoning and diseases, including type C botulism, avian cholera, aspergillosis, sarcocystis, and avian salmonellosis. Two diseases of particular concern recently are H5N1 avian influenza, which has been found in four other heron species, and West Nile Virus, which has been found in Least Bitterns.

Habitat loss and degradation is by far the greatest threat to the species. Historically, habitat loss consisted of wholesale destruction of marshes, mainly for agriculture. In southwestern Ontario, 90% of marshes have disappeared in this way. Although wetlands were still in steep decline from the 1950s to the 1990s, these declines are probably starting to slow, thanks to recent protection initiatives targeted at these habitats. Nonetheless, in Ontario at least, local habitat loss continues at a smaller scale, through the infilling of smaller marshes and fragmentation of larger ones, and through degradation caused by contamination, siltation and disturbance. Similar factors affect habitat on the wintering grounds, especially along the Gulf Coast and in Central America. Pesticides, fertilizers and other toxic substances in industrial and agricultural run-off accumulate in predators, such as Least Bitterns. High levels of the pesticide dieldrin have been found in Least Bittern eggs in Louisiana and in feathers in Ontario. Herons are particularly susceptible to residue build-up and eggshell thinning from these toxic substances. At various sites, including in Ontario and Quebec, several invasive species are outcompeting the cattails in which most Least Bitterns breed. These species include Purple Loosestrife, Reed Canary Grass, Common Reed, and, especially in Quebec, Flowering Rush. All these species also encourage succession of wetlands to drier habitat. Least Bitterns may be susceptible to devastating outbreaks of disease and parasites. Collisions of Least Bitterns with cars or human-made structures, such as towers and fences, are a serious local threat. There are regular collisions of Least Bitterns with a generator tower in Ontario, including eight on a single weekend. Disturbance from recreational activities, pleasure boating in particular, is a conservation concern for herons because it can disrupt activities such as foraging and can cause nest abandonment. Motorized boating creates waves that could flood nests and erode the marsh edges where the species forages. Climate change could lower water levels in the Great Lakes and St. Lawrence River, reducing the size and distribution of the adjacent wetlands. Since abundance of breeding Least Bitterns along the Great Lakes is very tightly linked to changes in water levels, a drop in water levels is sure to result in a decline in the number of birds in southern Canada.

Progress in Recovery A Least Bittern Recovery Team has been in place in Canada since 2004. The team has prepared a Draft Recovery Strategy for the Least Bittern. Research and Monitoring Activities A species-specific survey protocol, using Least Bittern call-broadcasts, has been developed by the Canadian Wildlife Service. The goal is to improve detectibility by eliciting call responses from territorial birds in order to obtain information on the distribution and relative abundance of the Least Bittern across its Canadian range. Additional information is collected to increase knowledge on the Least Bittern breeding biology, behaviour and habitat use. The protocol has been used in Ontario in 2001-2002 and over the past 3 years (2004-2006) across Canada and several new breeding sites have been discovered in Manitoba and Québec. These findings likely reflect an increase in search effort and more effective survey methods rather than an actual range or population expansion. In addition, specific protocols to characterize and describe Least Bittern breeding habitats have been developed and tested in Manitoba and Québec since 2004. Least Bittern surveys in Manitoba have been ongoing since 2003. Information on distribution, relative abundance and breeding habitat characteristics has been obtained from numerous wetlands within the historical range of the species in the province, as well as from other suitable locations. To date, Least Bitterns have been found in 12 different wetlands throughout the province, from the south end of the province to the northern part of the Interlake region. The Ontario Breeding Bird Atlas field surveys completed in 2001-2005 found Least Bitterns in over 200 10x10km squares, mostly in the southern part of the province. New sites were discovered to the North and West of its known range. However, Least Bitterns were not detected in several sites where birds were recorded during Ontario Breeding Bird Atlas surveys in 1981-1985. Coastal wetlands in Ontario are being monitored to evaluate their use by marshbirds and a landscape-level analysis of wetland integrity is currently being developed in southern Ontario. Least Bitterns were surveyed in suitable habitats in National Wildlife Areas (NWA) in Québec with numerous birds detected; similar activities are planned for NWAs in Ontario. Wetland assessment and Least Bittern surveys were conducted in nearly 100 sites in the past 3 years in Québec, with nearly 40 new sites discovered. The first year of field surveys for the Maritime Breeding Bird Atlas was completed in 2006 with call-broadcast methods being used to increase the detectibility of all marshbirds, including the Least Bittern. Recovery Activities Stewardship activities were initiated in numerous locations to augment public awareness on the status of the Least Bittern and to implement wetland conservation actions. Following the completion of a recovery strategy in 2007, action plans will be developed to implement recovery activities highlighted in the strategy. Presently the federal government is working in cooperation with the provincial governments and non-government organizations within the Least Bittern range to ensure the conservation and protection of known Least Bittern breeding locations. URLsOntario’s Biodiversity: Species at Riskhttp://www.rom.on.ca/ontario/risk.php?doc_type=fact&lang=&id=104 Environment Canada: Threatened Species: Least Bitternhttp://lavoieverte.qc.ec.gc.ca/faune/oiseaux_menaces/html/petit_blongios_e.html