This small hemiparasitic annual plant is known from vernal pools and seeps in the endangered Garry Oak ecosystems of southern Vancouver Island. Its small range, fluctuations in number of mature individuals and few locations coupled with destruction of individuals and degradation of habitat through recreational use, grazing by introduced Canada Geese, competition from invasive plant species, and residential development put it at on-going risk.
COSEWIC History of Status Designation: Designated Endangered in April 1998. Status re-examined and confirmed in May 2000 and November 2011.
SARA Status: Schedule 1, Endangered
Date of Listing (yyyy-mm-dd): 2003-06-05 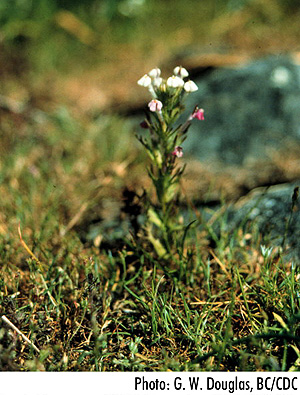 This plant belongs to the Figwort (Scrophulariaceae) family. The Bearded Owl-clover can reach heights of 10 to 50 cm and the stems are covered with tiny hairs. The leaves are 2 to 8 cm long, alternate, and pinnately divided (leaflets arranged on opposite sides of an elongated axis). The flowers are white or pink, club-shaped, and aggregate to form a floral spike at the top of the stem. The floral parts are dotted with purple.

Globally, the Bearded Owl-clover occurs from Southern Oregon to Northern California and into southeastern Vancouver Island, British Columbia. In Canada, this species is restricted to the Victoria area along the ocean from Harling Point, the most westerly site, to Glencoe Cove in Gordon Head at its most northeasterly extension. Populations of this species cover about 22 km of coastline. There are eight known populations of the Bearded Owl-clover in six sites in the Victoria area. Each population ranges in size from just a few individuals to a thousand. No long-term studies on the population dynamics of this species have been conducted and consequently, there is no available data on population trends.

The Bearded Owl-clover can be found growing on rocky shorelines in the Victoria area, on exposed points or in small coves. Southeastern Vancouver Island is in a rainshadow belt created by the Olympic Mountains to the South which is responsible for the warm and dry climate in this area. Other species that grow in these same conditions are Coastal Douglas-fir and Garry Oak savanna vegetation. The Bearded Owl-clover generally grows in open sites or areas with a heavy shrub layer of Broom (Cystisus scoparius) and Gorse (Ulex europaeus).

The Bearded Owl-clover is at the northernmost limit of its range. The species requires very specific habitat conditions that occur in a restricted area in the Victoria area. Providing that climatic conditions remain stable on southern Vancouver Island, the main factors threatening this species in Canada are the lack of protection in city parks, development of waterfront areas on private property, and competition from introduced plants.