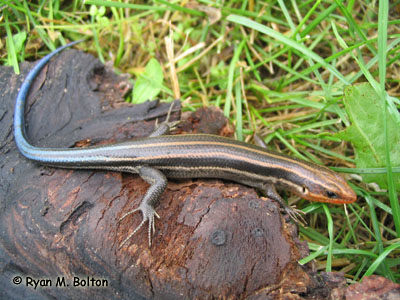 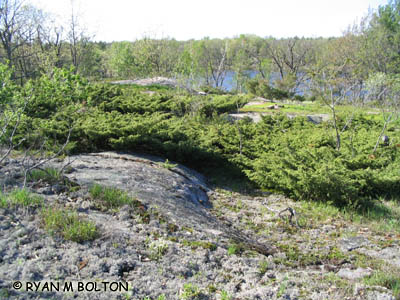 Newly hatched Five-lined Skinks have five cream stripes on their iridescent green-black bodies, and a bright blue tail. The medial stripe divides in two on the head. This coloration fades with age to become solid bronze. During the breeding season, adult males develop bright orange colouration about the jaws and chin, which may persist in very large individuals. Very large females may also show some pink on the chin. Maximum adult snout-vent length is 81 mm; males are not significantly larger than females.

The distribution of the Five-lined Skink roughly coincides with the deciduous hardwood forests of eastern North America. In Canada the skink is found only in southern Ontario. In the southwest there are ten populations on or near the shores of Lakes Erie, St. Clair and Huron. More to the east, at the southern limit of the Canadian shield, 32 extant populations are found from Parry Sound County, along the Georgian Bay, and over 200 km eastward to Leeds County. In all of Ontario, 14 known populations have disappeared in the last 20 to 30 years. The only population estimate available is from Point Pelee National Park, where densities of 17 to 53 animals per hectare were counted in 1989, which extrapolates to 1000-2000 skinks for the entire park. Between 1990 and 1995, this population suffered a threefold to fivefold decline. If this trends continues the park’s populations could be extirpated in the near future.

Five-lined Skinks inhabit open deciduous forest or field habitats where sufficient debris is available for cover and some source of open water is nearby. On the shores of Lakes Huron and Erie, the skink is found under debris washed onto the sand dune. In the Canadian Shield area, skink habitat is characterized by bare rocky knobs and ridges with scattered shallow pockets of soil. Preferred microhabitats are found in large, moist, moderately decayed debris, such as logs or waste building material. Females select larger, warmer and moister microhabitats than either males or juveniles. On the Canadian Shield, thin rock slabs and leaf litter are used. Sites below the frost line and with good drainage are required for hibernation.

Five-lined Skinks attain sexual maturity after 21 months. Mating takes place in late spring. Mate recognition is visual and olfactory. Mated females construct a nest chamber under a board, a flat rock or a log, or inside a rotting log. Nests may be communal. A clutch averages 9-10 eggs; these are protected by the female. The skinks forage diurnally, actively seeking spiders, insects and other invertebrates. Most adults breed only twice in their lifetime; few live beyond five years. Skinks are preyed upon by several small generalist predators, such as weasels, snakes and some birds. Hibernation sites are often occupied by several individuals, and are found in hollow logs or underground, up to eight feet deep. One defense against predators is to lure them towards the tail, which can detatch and be regrown.

This species can coexist with humans in most areas, if microhabitats remain available. At Point Pelee National Park, the major threat facing the Five-lined Skink populations are poaching and degradation of microhabitats. Wild skinks from protected areas are sold in pet shops in the Windsor - Detroit area. The removal of wood debris for firewood or other use, and damage to the dune vegetation, are also detrimental.