Scientific Name: Falco peregrinus pealei
Other/Previous Names: Peale's Peregrine Falcon
Taxonomy Group: Birds
COSEWIC Range: British Columbia
COSEWIC Assessment Date and Status Change: November 2017
COSEWIC Status: Special Concern
COSEWIC Status Criteria: Met criterion for Threatened, D1, but designated Special Concern given a continuing increase in numbers, a large part of the population breeding in protected areas, and rescue effect.
COSEWIC Reason for Designation: This subspecies occurs along much of the British Columbia coastline. Despite a continuing increase in numbers, its population remains small. However, a large portion of the population breeds in protected areas, and there is a high probability of rescue from the United States. Conversely, there remains concern that oil spills, or other factors that are capable of reducing seabird populations upon which they prey could result in the subspecies declining.
COSEWIC History of Status Designation: The Peregrine Falcon in Canada was originally evaluated by COSEWIC as three separate subspecies: anatum subspecies (Endangered in April 1978, Threatened in April 1999 and in May 2000), tundrius subspecies (Threatened in April 1978 and Special Concern in April 1992) and pealei subspecies (Special Concern in April 1978, April 1999 and November 2001). In April 2007, the Peregrine Falcon in Canada was assessed as two separate units: pealei subspecies and anatum/tundrius. The Peregrine Falcon pealei subspecies was designated Special Concern in April 2007 and November 2017.
SARA Status: Schedule 1, Special Concern
Date of Listing (yyyy-mm-dd): 2003-06-05 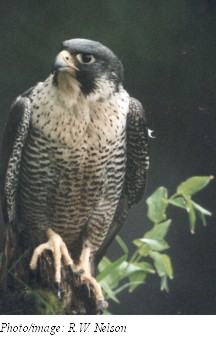 The Peregrine Falcon is a crow-sized raptor with long pointed wings that enable it to fly at speeds as fast as 300 km per hour when diving at prey. Adults have a blackish stripe across the cheek below each eye, bluish-grey or slate-grey upperparts, and white to buff underparts with blackish brown bars across the sides and thighs and brown spots on the abdomen. The underside of the wings is white with blackish bars. The sexes differ in size, with females being larger than males. Young peregrines resemble the adults, but they have a dark brown cap and dark brown upperparts. They have a black facial stripe and a dark brown tail with buff bars and a white tip. Their underparts are buff coloured with brownish-black streaks. The three subspecies that breed in Canada are very similar, with slight differences in coloration and size. The pealei subspecies of the Peregrine Falcon is the largest and darkest of the three.

The Peregrine Falcon is found in a wide range of habitats, from Arctic tundra to sea coasts, prairies and urban centres. These falcons usually build solitary nests on cliff ledges or crevices, but they sometimes build their nests on the ledges of tall buildings or bridges, always near an abundant source of prey. Individuals of the pealei subspecies of the Peregrine Falcon often nest on small cliffs tucked underneath overhanging Sitka spruce roots, but they have been known to nest on cliffs as high as 366 m. These birds occasionally nest in tree nests that have been abandoned by cormorants or bald eagles or in natural tree cavities. Natural nesting habitat does not appear to have changed significantly since the populations crashed, and this habitat is still largely available for re-occupancy.

Members of the pealei subspecies of the Peregrine Falcon usually nest near a seabird colony: seabirds make up a large percentage of their diet. These falcons most frequently take auklets, storm-petrels and murrelets (mostly ancient murrelets) in flight. Other prey may include bats, rodents and other mammals. The Peregrine Falcon reaches reproductive maturity in its second year. Adults demonstrate a high degree of nest site fidelity, and some nest sites have been used year after year for decades. Nests are generally scraped in substrate on cliff ledges. Scraping in the substrate begins early in courtship and continues until egg laying, which occurs in April in the pealei subspecies of the Peregrine Falcon. In British Columbia, the Peregrine Falcon usually produces only one clutch of one to five eggs each year, with three or four eggs being most common. Incubation lasts between 32 and 35 days, and the female does almost all of the incubation of the eggs and brooding of the chicks. Nestlings leave the nest about 40 days after hatching, and they continue to be fed by the adults. The young may remain in the vicinity of the nest site for three to six weeks after fledging. Most juveniles disperse hundreds of kilometres from the area where they were born. Peregrine Falcons have a lifespan of 4 to 5 years, but some individuals are known to have lived 20 years. Although in some regions young falcons may fall prey to red foxes, golden eagles or great horned owls, predation is not a serious threat to the species. For the most northerly populations, mortality results primarily from climatic factors (cold, wet weather). In the fall, most Peregrine Falcons migrate south to the southern United States, Mexico, Central America or South America. However, some pairs that nest along the Pacific coast and in the southern interior of British Columbia may remain at nest sites through the winter if food supplies are adequate. This is especially true of individuals of the pealei subspecies of the Peregrine Falcon.

The main factor implicated in the widespread decline of Peregrine Falcon populations in North America is reproductive failure following exposure to organochlorine pesticides, particularly DDT, which causes the birds to produce eggs with shells so thin that they break during incubation. Since these chemicals were banned in Canada and the United States in the early 1970s and in Mexico in 2000, falling concentrations have been observed in the tissues of Peregrine Falcons, a situation that has been linked to an increase in annual survival rates for young falcons. The pealei subspecies of the Peregrine Falcon escaped the drastic declines caused by exposure to pesticides. However, it has recently been shown that new pesticides that are widely used in Canada, specifically polybrominated diphenyl ethers (PBDEs), constitute a potential threat to the species. The effects of these chemicals, which are present in high concentrations in some Peregrine Falcons, are not known. Numbers of the pealei subspecies of the Peregrine Falcon are primarily influenced by the availability of their prey species. The population on Langara Island in British Columbia is known to fluctuate in response to changes in the numbers of seabird prey, especially the ancient murrelet. In some locations, seabird populations may be adversely affected by introduced mammalian predators and by oil spills, and local Peregrine Falcon numbers could decline if the abundance of their prey decreases. Other limiting factors include human disturbance at nest sites, potential for increased falcon harvesting for falconry, and illegal harvesting of eggs and nestlings for falconry.

In common with other raptors, Peregrine Falcons are not protected under the federal Migratory Birds Convention Act, 1994 or the U.S. Migratory Bird Treaty Act of 1918. Most nest sites of the pealei subspecies of the Peregrine Falcon are in provincial parks or ecological reserves or in Canadian national park reserves, where they are protected. The species is also protected under the British Columbia Wildlife Act, which makes it an offence to harm, kill or collect birds, eggs or nests or to destroy occupied nest sites.

The Peregrine Falcon is also listed in Appendix II of the Convention on International Trade in Endangered Species of Wild Fauna and Flora (CITES), which regulates international trade in species that are or may be threatened by commercial trade.

Summary of Progress to Date Capturing of all subspecies of Peregrine Falcon has not been permitted in British Columbia since 1988/89 and is protected by the British Columbia Wildlife Act. Seabirds are the primary prey of the F.p. pealei subspecies and most major known seabird colonies in coastal British Columbia are under some form of protected area status. The British Columbia Peale’s Peregrine Falcon population has been stable to increasing since standardised 5-year surveys began in 1970. Since then, the number of known occupied nests has increased from 62 to 109, although a large part of this increase is due to increased survey coverage. Summary of Research/Monitoring In conjunction with the national Peregrine Falcon surveys, standardised monitoring of Peale’s Peregrine Falcons has been taking place every 5 years since the 1970’s. The population on Langara Island has been banded, assessed for productivity, and sampled for blood and feathers annually for 37 consecutive years. In addition, studies at nests around Vancouver Island between 2000 and 2005 involving inventory and monitoring, blood sampling, banding, and radio-telemetry have tried to determine residency, winter movement patterns, habitat use, potential critical habitat, productivity, toxicity, and genetic information. Results from the blood sample analyses have confirmed the genetic differences among Peale’s Peregrine Falcons of the Queen Charlotte Islands and North and West Vancouver Island peregrines. It has also shown that Gulf Island nests and other sites in the Strait of Georgia thought to have only F.p. anatum, actually have F.p. pealei as well. Summary of Recovery Activities In the mid 1990’s, the Canadian Wildlife Service conducted a major rat eradication program on Langara Island to recover the declining Ancient Murrelet population, which is an important food source for the Peregrine Falcon. The eradication was successful and there is evidence that falcon populations are rebounding. The British Columbia government has been actively involved in Peregrine Falcon outreach activities including delivering public presentations, gathering information from the public, developing fact sheets, and creating beneficial management practices guidelines to assist municipalities and developers in understanding raptor conservation in urban and rural areas. In addition, the government is developing a provincial status report on the species and a management plan for the Peale’s subspecies,and has participated in recovery planning activities on the national Peregrine Falcon Recovery Team. URLs British Columbia’s Wildlife at Riskhttp://wlapwww.gov.bc.ca/wld/documents/perfal_s.pdf 1988 Peale’s Peregrine Falcon in BC: Status and Managementhttp://wlapwww.gov.bc.ca/wld/documents/peales.pdf The Birds of North America Onlinehttp://bna.birds.cornell.edu/BNA/demo/account/Peregrine_Falcon/MEASUREMENTS.html