Scientific Name: Physella wrighti
Taxonomy Group: Molluscs
COSEWIC Range: British Columbia
COSEWIC Assessment Date and Status Change: April 2008
COSEWIC Status: Endangered
COSEWIC Status Criteria: B1ac(iv)+2ac(iv)
COSEWIC Reason for Designation: This small snail is an endemic species living only within the hotsprings complex located in Liard River Hotsprings Provincial Park in British Columbia. The population is small, numbering fewer than 10,000 individuals and occupies an extremely restricted habitat around the margins of two pools and an outlet stream. Population size is believed to fluctuate by at least an order of magnitude in this short-lived snail (~1 year lifespan). The species is a habitat specialist requiring geothermally regulated water and substrates near the water/air interface in areas of no current. The hotsprings complex has been in use by humans for over 200 years. The species has survived structural modification and maintenance of the pools, the introduction of foreign substances such as soaps and shampoos, and trampling. However, a single event such as abrupt changes in water flow, chemical contamination or introduction of exotic species, could significantly affect persistence of this snail.
COSEWIC History of Status Designation: Designated Endangered in April 1998. Status re-examined and confirmed in May 2000 and April 2008.
SARA Status: Schedule 1, Endangered
Date of Listing (yyyy-mm-dd): 2003-06-05 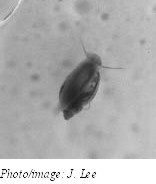 The Hotwater Physa is a tiny freshwater snail adapted to live in hot springs. The species has a high-spired shell that is about the size of your smallest fingernail. The species’ shell is blackish-grey, coils to the left, and has an ear-shaped opening. (Updated 2017/07/19)

The hotsprings complex in Liard River Hot Springs Provincial Park in northeastern British Columbia, Canada is the only place in the world where you can find the Hotwater Physa. The population is small and is made up of fewer than ten thousand snails. (Updated 2017/07/19)

The Hotwater Physa is adapted to live in water that is 23 to 40 degrees Celsius. The species is usually found just above and below the surface of the water on mats of algae, woody debris or sediment. It depends on areas of little to no water flow. (Updated 2017/07/19)

The Hotwater Physa moves along a solid surface or uses a mucus trail to change its specific gravity to rise above the water. The species depends on its external environment to regulate its body temperature. Hotwater Physa are hermaphrodites. This means each individual has both male and female reproductive organs. Hotwater Physa spawn in spring, then the species lays crescent-shaped egg masses above the waterline. These egg masses contain 6 to 18 eggs. Eggs hatch into juveniles after several days. Most Hotwater Physa breed only once and die shortly after laying their eggs. The species lifespan is thought to be only one year. This snail is thought to graze on bacteria and algae that grow on underwater surfaces. Hotwater Physa may be a food item for animals in the area, including Lake Chub, Lesser Yellowlegs, ducks, and frogs. (Updated 2017/07/19)

As the Hotwater Physa occupies a very limited area, it is vulnerable to many local threats. Most threats to the Hotwater Physa are through potential changes to the hotspring habitat as a result of human activities relating to recreation within the park, or potential industrial activities affecting source water. Threats include changes to the flow regime of the hot springs, introduction of deleterious substances, physical habitat destruction or alteration, introduced species, and collecting. Visitors of the hot springs may threaten the species through water contamination and trampling. (Updated 2017/07/19)

A Recovery Strategy for the Hotwater Physa was published in 2007. Several recovery initiatives have taken place since. Effort was made to standardize methods and conduct surveys on population size, habitat use, patterns, and environmental factors. Genetic studies were also done to distinguish the Hotwater Physa from similar species. The British Columbia Ministry of Environment initiated assessments for riparian disturbance and water contaminants caused by park visitors. As a result, public access to a portion of the hot spring complex was restricted. Public outreach activities have also occurred, including improved signage in the park and a television feature on the Liard River Hot Springs. (Updated 2017/07/19)