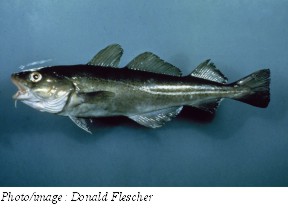 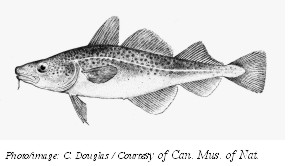 The Atlantic Cod is one of two species of cod off Canada's Atlantic Coast. It has a generally spotted body, a leaden-silvery peritoneum with black dots, small eyes, a stout caudal peduncle, and a lateral line that is paler in colour than the adjacent areas of the body. Its average weight is 2.2 kg, but an individual of 90 kg has been reported.

The Atlantic Cod occurs on both sides of the North Atlantic. In the western part of the range it occurs along the coast and on the continental shelves from Cape Hatteras (North Carolina) to Davis Strait (between Baffin Island and Greenland), the Flemish Cape, and the east coast of Greenland. There is an unknown number of independent populations of the species, and evidence of recent extinctions of local stocks in Newfoundland and the Gulf of Maine. The percentage of collapse of spawning biomass between the year of calculated maximum spawning biomass (between 1956 to 1984 depending on the stock) and 1992, when a moratorium on fishing took effect, is between 77% and 98.9% for the following six major stocks within Canadian waters: Labrador-N.E. Newfoundland, S. Grand Bank, Southern Newfoundland, Western Newfoundland, S. Gulf of St. Lawrence, and E. Scotian Shelf. Some stocks have continued to decline since the moratorium.

Cod are found in the waters of the continental shelves and slopes, inshore or offshore depending on the season. Dense aggregations of foraging and spawning cod were found at a depth of 350 m, but spawning usually occurs in shallower waters. Eggs, larvae and adult Atlantic Cod have different trophic positions with associated variable habitat requirements, but little is known about these.

Maturity begins at roughly five years. The cod are thought to be capable of spawning each year thereafter. It is not uncommon for some individuals to reach 16 years of age. A female that is one meter in length can produce about five million eggs; larger fish produce more eggs with higher viability. Older males have a longer spawning season. Spawning is fairly widespread and thought to be fragmented according to suitable habitat. Spawning locations are usually at depths of 150 m in the northern part of the range and 90 m in the southern part. Spawning time is earlier for groups without reach of warmer slope waters. Adults migrate inshore in spring and offshore in winter. Fry consume copepods, barnacle larvae and other small crustaceans. Young adults eat shrimp, small lobsters, euphausiids, etc. Adults of 50 cm or more consume predominantly fish, such as herring and capelin, but also molluscs and other invertebrates, as well as sea birds. Seals are know to prey on cod.

Many hypotheses have been posed to account for the decline in cod stocks, but most have not been tested and over-fishing appears to be the strongest. The decline has been accompanied by the collapse of the populations’ age structures, earlier maturity, reduced weights at age of maturity, contracted distributions, possibly restricted spawning seasons, and reduced reproductive success. These factors have negative implications for recovery and make the fish an easier target to catch. In addition, the decline may have been augmented by some negative effects lower in the food chain, or in the general environment, such as temperature changes, or habitat changes due to trawling. A large number of cod smaller than commercial size may also be fished inadvertently by current methods or by methods used for other species.