Scientific Name: Cryptantha minima
Other/Previous Names: Tiny Cryptanthe
Taxonomy Group: Vascular Plants
COSEWIC Range: Alberta, Saskatchewan
COSEWIC Assessment Date and Status Change: May 2012
COSEWIC Status: Threatened
COSEWIC Status Criteria: B1b(iii)c(iv)+2b(iii)c(iv)
COSEWIC Reason for Designation: This small herbaceous annual plant is limited in Canada to a small area of grassland habitat in southeastern Alberta and adjacent southwestern Saskatchewan. Though a larger range and population size are now known due to greatly increased search effort, the species remains under threat from residential and industrial development, agricultural activities, altered hydrological regimes, and a lack of fire and grazing which allows encroachment of competing vegetation, such as invasive species. The species’ extent and quality of habitat continue to decline and it is subject to extreme fluctuations in population size, which increases its vulnerability.
COSEWIC History of Status Designation: Designated Endangered in April 1998. Status re-examined and confirmed in May 2000. Status re-examined and designated Threatened in May 2012.
SARA Status: Schedule 1, Threatened
Date of Listing (yyyy-mm-dd): 2003-06-05 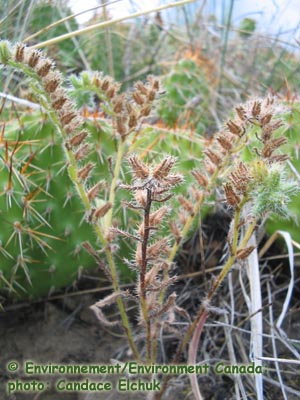 Tiny Cryptantha is a small, bristly-haired annual plant that has tiny white flowers with yellow centres. The Canadian populations are the most northern occurrences of this species, and because these populations are disjunct from more southern populations, they could carry unique genetic variability that may contribute to adaptations and long-term persistence of the species. (Updated 2017/08/11)

Tiny Cryptantha is native to North America. In Canada, the species is associated with river systems, mainly the South Saskatchewan River valley in the eastern half of Alberta and into western Saskatchewan. It also occurs near the lower Red Deer, lower Bow, Oldman and Lost rivers in Alberta and the Red Deer River in Saskatchewan. The closest occurrence outside Canada is a historical collection from Great Falls, Montana approximately 200 km from the southernmost Alberta population at Onefour. The species’ range in Canada represents less than 1% of its total range. (Updated 2017/08/11)

Tiny Cryptantha is found within about five kilometres of river systems, typically in sandy, level to rolling upland areas and sand dunes near valley breaks, valley slopes with up to 50% slope, and level or gently sloping terraces in valley bottoms, particularly in meander lobes where flooding provides more frequent disturbance. It requires habitats with low litter levels and a minimum of 10% bare soil for establishment. Periodic soil disturbance by wind, water, erosion or animals is required to open up the canopy and provide spaces for germination and establishment. However, areas that have repeated intense disturbance, such as actively eroding slopes, dunes and sandbars do not appear to support Tiny Cryptantha. (Updated 2017/08/11)

Tiny Cryptantha is an annual that spends a large portion of its life cycle as a seed. It lacks a dormancy mechanism, but exhibits conditional dormancy in which germination is temperature and moisture dependent. The proportion of seeds deposited into the seed bank and the period of viability of seeds remains unknown. Seeds are likely dispersed passively, with most falling close to the parent plant. There may also be dispersal by animals, wind and water. There is no means of asexual reproduction for this species. (Updated 2017/08/11)

Availability of suitable habitat is limiting. Identified threats to Tiny Cryptantha include habitat loss and degradation as a result of residential development and oil and gas exploration. Cultivation and sand/gravel extraction have also been identified as threats. Additional threats include modifications to natural processes through altered hydrological regimes and lack of grazing and/or fire, invasion by alien species, and the effects of climate change. (Updated 2017/08/11)

Name Amendment to the Final Recovery Strategy for the Tiny Cryptanthe (Cryptantha minima) in Canada RE: Identification of Critical Habitat and Action Planning
Status First posting on SAR registry