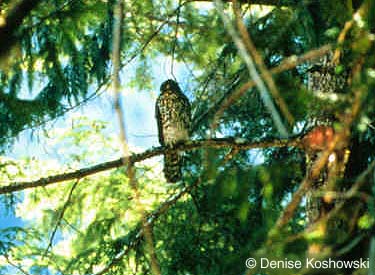 The Northern Goshawk is widely distributed in both temperate and boreal forests on the Holarctic. In North America, the species occurs over most of northern North America. The Northern Goshawk laingi subspecies occurs in southeastern Alaska, on the coastal islands of British Columbia and the Olympic Peninsula. It may also occur in coastal areas of Washington and Oregon. In Canada, the subspecies only occurs in coastal British Columbia, mainly on the Queen Charlotte Islands and Vancouver Island, and probably on other large coastal islands. Population numbers are uncertain but recent estimates suggest that the Queen Charlotte goshawk numbers about 300 breeding pairs on Vancouver Island and 50 breeding pairs on the Queen Charlotte Islands. Populations of the Queen Charlotte goshawk are generally thought to be in decline.

Northern Goshawks live in a wide variety of habitats, but they require complex habitat features during their breeding season. The species prefers forest stands with large amounts of mature or old-growth trees or stand characteristics, but it may breed in younger stands. Northern Goshawks specifically need forests with high canopy closure. In addition, small canopy openings (i.e. the space resulting from the fall of one or two trees) are often associated with their nest sites. In Canada, nests are mainly found in trembling aspen and Douglas-firs, but Northern Goshawk laingi subspecies also use other tree species (e.g. Black Cottonwood, Western Larch and Ponderosa Pine). More specifically, the goshawks on Vancouver Island primarily nest in Douglas-firs and western hemlocks. On this island, it is thought that this subspecies selects nest locations based on forest and tree structure, more than on tree species.

The Northern Goshawk is a monogamous species reaches maturity around two years of age. Females usually lay their clutch of eggs (usually two and four eggs in number) by the end of May. The females (and occasionally males) incubate the eggs for a period of 28 to 32 days. In the Queen Charlotte Islands, young Northern Goshawks typically fledge during the first two weeks of July. Nesting success is variable for this species but a high percentage of nest attempts produced at least one fledgling in most studies that have been carried out to date. In Canada, the Northern Goshawk laingi subspecies is probably a year-round resident at its nesting site. In Canada, the Northern Goshawk laingi subspecies prey on a variety of medium-sized birds and mammals in the Queen Charlotte islands (e.g. Red Squirrel, Red-breasted Sapsucker, Blue Grouse, Varied Thrush and Hermit Thrush) and on Vancouver Island (e.g. Red Squirrel, Varied Thrush, Northern Flicker, Red-breasted Sapsucker, Marbled Murrelets and bats).

The most significant threats to the Northern Goshawk laingi subspecies include continued logging of low-elevation, old growth coniferous forest and suitable second-growth forest. Habitat degradation is the most likely cause of past population declines.