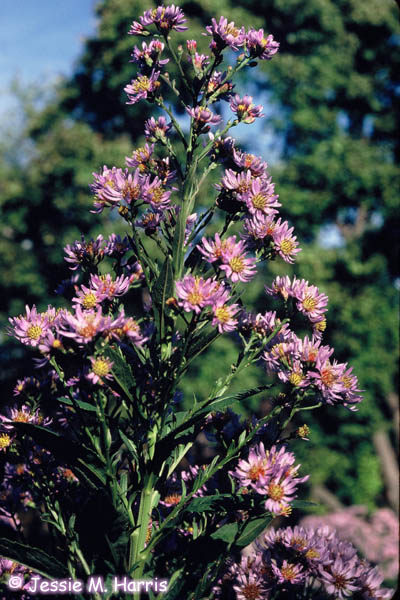 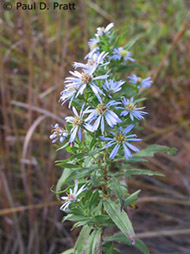 There are two varieties of the Willowleaf Aster. The range of the variety praealtum extends into Canada, while the eastern variety angustior is limited to the eastern United States.

The Willowleaf Aster is a fall-flowering, upright perennial that grows from a rhizome (spreading underground stem). The plant can be up to 1.5 m tall, and has a relatively smooth, waxy stem with many leafy flower clusters. The flower heads have 20 to 35 outer florets with pale blue to violet rays; the 20 to 30 central florets have a yellow centre, and the rays become purple with age. The leaves on the upper portion of the stem are narrow and linear, with a few small teeth along the margins; the lowermost leaves have usually fallen off by the time the plant is in flower. The seeds are contained individually within fruiting bodies called achene. When mature, the dry achene fall off the parent plant, and are likely dispersed by the wind.

The Willowleaf Aster is common in the Midwestern United States, and reaches the northeastern extent of its range in southwestern Ontario. It is highly localised in Canada, and occurs mainly in two concentrated areas around Windsor and on Walpole Island. There are 13 localities known for the Willowleaf Aster; at least one of these, and perhaps as many as five, have become extirpated. No population trend information is available.

The Willowleaf Aster is found in prairies, meadows, and areas of dense shrubs or small trees throughout its range. In southwestern Ontario, it grows most often in oak savannahs, but is also found in disturbed areas such as roadsides, along railways, and in abandoned fields.

It is difficult for scientists to determine the number of genetic individuals of Willowleaf Aster at a site because the species grows from rhizomes, and forms potentially large, overlapping clones. This aster will also reproduce by setting seed if there are enough genetically different species in the population. Pollen is transferred between individuals by insects - primarily bees, flies, and butterflies.

Many of the known populations occur within the city of Windsor, or on nearby Walpole Island. These areas have been heavily disturbed by industrial activities, house construction, and agricultural practices, and there is potential for further development. Sites observed in 1982 on Walpole Island have been eliminated by house construction. It is also likely that changing drainage patterns at some sites are having a critical impact.

In Windsor, a number of populations are protected where they occur within the Ojibway Nature Centre, the Ojibway Prairie Nature Reserves, and the Tall-grass Heritage Park.