Scientific Name: Anthus spragueii
Taxonomy Group: Birds
COSEWIC Range: Alberta, Saskatchewan, Manitoba
COSEWIC Assessment Date and Status Change: April 2010
COSEWIC Status: Threatened
COSEWIC Status Criteria: Does not meet any of the criteria, but designated Threatened because of a substantial decline in the population since the late 1960's and a projected loss and fragmentation of habitat likely to affect this area sensitive grassland specialist.
COSEWIC Reason for Designation: Approximately 80% of the global breeding population of this species occurs in Canada. It is a habitat specialist that needs large tracts of intact native grassland for breeding. Threats at both breeding and wintering grounds include ongoing habitat loss, degradation and fragmentation. The species has experienced long-term declines with no evidence of recovery.
COSEWIC History of Status Designation: Designated Threatened in April 1999. Status re-examined and confirmed in May 2000 and April 2010.
SARA Status: Schedule 1, Threatened
Date of Listing (yyyy-mm-dd): 2003-06-05 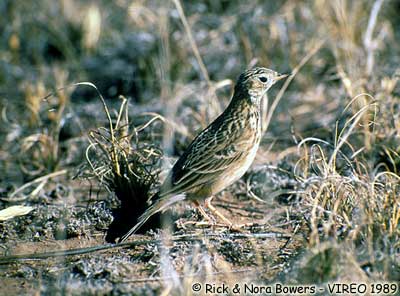 The Sprague's Pipit is a small (15-17 cm, 23-25 g), ground-nesting songbird that is endemic to the Canadian Prairies and northern Great Plains of the United States. The bird resembles a sparrow, with rather nondescript brown plumage, and a thin bill. The sexes are similar in appearance. Sprague's Pipits are secretive birds that are rarely seen out in the open. Individuals are most often detected by their song, which is a series of seven or eight tinkling, descending notes that is delivered from high in the air.

The species breeds from the foothills of the Rocky Mountains in southern and central Alberta, to west-central and southern Manitoba, and south to southern Montana, northern South Dakota and northwestern Minnesota. A single confirmed breeding record also occurred recently in south-central British Columbia. The breeding range appears to have contracted during this century, particularly in the northwestern (Alberta), northeastern (Manitoba), and southeastern (Minnesota) parts of the range. Sprague's Pipits winter in the southern United States and the northern two-thirds of Mexico. There are no historical estimates of population size for this species, but anecdotal accounts suggest that it was one of the most common grassland songbirds throughout much of its breeding range around the turn of the century. The species remains common in suitable habitat, particularly on the Canadian prairies. However, Breeding Bird Survey data collected over the past 30 years show that populations are declining rapidly in many parts of the range, particularly during the last 15 years. Populations in Alberta and Saskatchewan, where the highest densities of pipits currently occur, have declined by 9.4% and 5.4% per year, respectively, since 1996. Overall in Canada during this period, populations have been declining by 7.1% a year, with the sharpest decreases occurring in aspen parkland regions.

Native grassland is an important habitat for Sprague's Pipits. The species is rarely found in cultivated lands, or in areas where native grasses have been replaced with introduced forages. In general, the pipits prefer native vegetation of intermediate height and density, with moderate amounts of litter. Such areas tend to occur where habitats are lightly to moderately grazed, or where fires periodically remove vegetation. Areas of suitable habitat must be >150 ha to be attractive as breeding sites for this species. Habitats become unsuitable for breeding where livestock activity is intense, when native habitat is harvested as hay, when fires are supressed, or when native grasslands become fragmented by human activities. Current information suggests that at least 75% of native grasslands on the Canadian prairies has been lost to cultivation. This has greatly reduced the availability of suitable habitat for Sprague's Pipit.

Sprague's Pipits arrive on the breeding grounds in late April or early May. Females lay 3 to 6 eggs (average 4.5) between late May and early July, and incubate for 10-12 days. The female is primarily responsible for tending to the chicks. Less than one in three nesting attempts is successful, with depredation of eggs or young being the most usual cause of failure. Productivity might also be reduced by Brown-headed Cowbirds (Molothrus ater), which have been known to parasitize (lay their eggs in) up to 25% of pipit nests. Some pipits may initiate a second nest after successful completion of the first. Sprague's Pipits are mostly insectivorous, consuming beetles and grasshoppers, along with lepidopteran larvae, arachnids and hymenopterans. Seeds comprise < 3% of the diet during the breeding season. By late September, most individuals have departed for the wintering grounds.

Habitat loss is the primary cause of decline in this species. In particular, approximately 75% of native grasslands on the Canadian prairies have been lost to cultivation, which renders the habitat unsuitable for Sprague's Pipits. Among the other factors which may also reduce habitat suitability are: 1) intensive grazing, which removes vegetation and may cause reproductive failure due to disturbance and trampling of nests; 2) haying; 3) fragmentation of habitat; and 4) reduction in fire frequency, which encourages encroachment of woody vegetation and promotes excessive growth of vegetation and accumulation of litter. The use of pesticides to control grasshoppers may also impact Sprague's Pipit populations, since grasshoppers are an important food item for the adults and nestlings during the breeding season. The most significant 'natural' limiting factor for the species is probably drought, which affects nesting habitat and possibly food supply at the local level.

Name Amendment to the final Recovery Strategy for the Sprague’s Pipit (Anthus spragueii) in Canada RE: Partial identification of critical habitat in Alberta and Saskatchewan and Action Planning
Status First posting on SAR registry

Summary of Progress to Date Recovery for the Sprague’s Pipit is addressed under a national recovery strategy. Recovery goals and objectives for the species have been established, and threats, along with the recovery efforts required to mitigate these threats, have been identified. Summary of Research/Monitoring Activities Systematic surveys for Sprague’s Pipits have been conducted on federal lands along the northern portion of their range in Saskatchewan. This area was chosen because of the greater uncertainty associated with pipit numbers and distribution in this part of their range. Pipit populations continue to be monitored by staff at Suffield National Wildlife Area in southeast Alberta and via Grassland Bird Monitoring routes across the prairies. Demographic (e.g., survival and reproduction) monitoring was initiated at Last Mountain Lake National Wildlife Area in central Saskatchewan by staff in 2004 and has recently expanded to nearby Prairie Farm Rehabilitation Administration pastures (PFRA, part of Agriculture and Agri-Food Canada). Recent research has found pipit abundance, density, and productivity to be greatest on large plots of native mixed-grass prairie. Current research is focusing on how landscape composition influences Sprague’s Pipit density on native and non-native grasslands in Saskatchewan and Alberta. Demographic information, such as pipit growth rates, nesting success, and juvenile and adult survival, is being gathered from studies on native and non-native grasslands. Research using stable isotope analyses is being conducted to identify Sprague’s Pipit wintering grounds, determine its moulting patterns, and assess levels of dispersal and recruitment in grassland- and cropland-dominated landscapes in central Saskatchewan. Research in Grasslands National Park is determining the effect of grazing on pipit abundance and reproductive success. Summary of Recovery Activities Stewardship activities promoting the maintenance and enhancement of native prairie habitat are underway throughout the pipit’s range in Prairie Canada. Conservation agencies receiving support through the Habitat Stewardship Program for Species at Risk are working closely with producers to improve awareness of pipit habitat requirements and conserve native prairie habitat through voluntary agreements, management agreements, and conservation easements. URLs Alberta’s Endangered Species Conservation Committee – Sprague’ Pipit:http://www.srd.gov.ab.ca/fw/escc/pipit.htmlEnvironment Canada:http://www.pnr-rpn.ec.gc.ca/nature/endspecies/sar/db08s19.en.html The Nature Conservancy: Sprague’s Pipit:http://www.nature.org/initiatives/programs/birds/explore/spraguespipit.html Alberta, Naturally: Sprague’s Pipit:http://www.abheritage.ca/abnature/speciesatrisk/pipit_intro.htm Stephen K. Davis: Sprague’s Pipit Recovery Team chair and adjunct professor – University of Reginahttp://users.accesscomm.ca/skdavis/home_page.htm