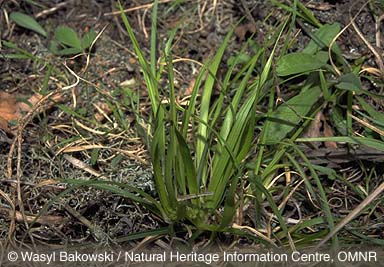 This is a relatively small sedge, with leaves up to 30 cm long. It belongs to a group of sedges characterized by having leaf-like pistillate scales, few-flowered solitary spikes near the base of the plant, and peduncles which are expanded at their tip. The narrow pistillate scales of the Juniper Sedge lack a translucent margin and have relatively short culms.

The Juniper Sedge is unique to southeastern Ontario and the southern Ohio-northern Kentucky region. In Canada, the sedge occurs only in the Salmon River Alvar area of Natural and Scientific Interest, in Lennox and Addington County. Of the fewer than 20 populations known globally for this species, only one population (with three sub-populations) is currently known in Canada. The three sub-populations consist of about 600, 1000 and 5000 rhizomatous growths that probably represent far fewer individual plants. A fourth sub-population is apparently extirpated.

This is a sedge of alvars, which is a rare, shallow-soiled, calcareous habitat type sometimes known as cedar glade. Juniper Sedge occurs in alvar habitats that are in relatively open woodland, usually dominated by Red Cedar (Juniperus virginiana). Alvar habitats in Ontario are maintained in an open condition by a variety of factors including drought and fire.

The biology of this species is not well known, since the plant was first described less than a decade ago. It is a perennial sedge that grows in colonies in open alvar woodland. It can be locally abundant. It appears to be an obligate calciphile.

Alvars are very desirable for quarries, since the limestone bedrock is at or near the surface. One of the three remaining sub-populations in the Salmon River Alvar is threatened by the expansion of an existing quarry. Grazing in the area also threatens the plant. Gene flow between the three sub-populations is impeded by obstacles, even though the distances between them are less than 3 km. Housing developments, utility corridors, all-terrain vehicles, garbage dumping, and competition from exotic plant species are all actual or potential threats to the sole Canadian population.

The Juniper Sedge is protected by the Ontario Endangered Species Act. Under this Act, it is prohibited to kill, harm, harass, or collect this species, or to destroy its habitat.

Summary of Progress to Date Public awareness campaigns have increased stewardship actions among private land owners. The goal of public involvement in restoration activities is to reduce habitat loss since it is a leading factor in diminishing populations of Juniper Sedge and other species at risk. Without these stewardship agreements, many wetland habitats would not have any kind of protection. Summary of Research/Monitoring Activities Maps are being created to monitor and gain knowledge of habitat distribution. Biological inventory data (habitat type, species present, species’ population and distribution, etc.) are being collected to provide baseline information for mapping habitat distribution and to guide stewardship and habitat protection programs. Summary of Recovery Activities Stewardship plans, workshops, and information packages are all offered to land owners to encourage them to conserve the natural habitat of their land and participate in Juniper Sedge recovery. Knowledge and awareness of Juniper Sedge habitat helps guide landowners to direct development on their land to non-alvar areas, thus reducing the chance of unintentional habitat destruction. Landowners with alvar ecosystems on their lands are contacted and invited to attend a workshop and alvar field tour to familiarize themselves with the rarity and value of Juniper Sedge and other alvar species, the process of developing a recovery strategy, and the ways they can become actively involved. Habitat restoration activities, such as the removal of invasive plant species, are done late in the summer to protect breeding birds and other species. URLs Canada’s Species at Risk: Juniper Sedge: http://www.canadianbiodiversity.mcgill.ca/english/species/endangered/endangeredpages/car_jun.htm Ontario’s Biodiversity: Species at Risk: http://www.rom.on.ca/ontario/risk.php?doc_type=fact&lang=&id=139