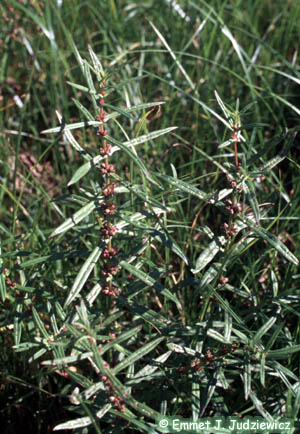 The Scarlet Ammannia is an annual, shoreline aquatic plant that reaches 5-100 cm in height. The glabrous (hairless) stem may be erect or slightly bent over and can be either simple or branched. The 1.5-8 cm long leaves are opposite and oblong to oblong-lanceolate (tapering to a point at both ends) in shape. One to three small, pale lavender flowers with light yellow anthers occur at the base of the leaves. The sessile (stemless) fruits are about 4-6 mm long.

The plant occurs in Mexico and throughout central U.S.A. In Canada, it occurs at very few sites restricted to a small area. It is found in the Osoyoos Lake area of southcentral British Columbia, and in Essex County in extreme southwestern Ontario. Four British Columbian sites have been recorded: one at Haynes Point, two in the Osoyoos Indian Reserve, and one at Veronica Lake. Only two of these sites (one population at Veronica Lake and two in the Osoyoos Indian Reserve) were still extant during a 1994/95 survey. Populations at the B.C. sites consisted of 30, 150,000 and 100 plants, respectively. In Ontario, only one of the five known sites had plants (about 50 in number) in 1997.

In British Columbia, the Scarlet Ammannia inhabits moist sandy shorelines, or moist or dry alkaline flats. These sites are submerged in the spring; the plants emerge as the water levels drop in the summer. The Ontario sites are on mudflats, sand beaches, wetland edges, dried pond bottoms, and moist sandy depressions created by dirt bikes.

This plant is generally self-pollinating, although some outcrossing does occur. It is dependent on water level fluctuations for the creation and maintenance of suitable habitat. Because buried seeds survive periods of high water levels and other adverse conditions, visible plants may be absent from a site for several years before conditions again favour growth. However, the species cannot survive sustained high lake levels. Its annual life cycle enables the species to quickly colonize new sites that its seeds have reached.

The Scarlet Ammania is subject to population fluctuations, and the greatest threats to the British Columbia populations are habitat destruction and controlled water level regimes. Habitat destruction has resulted from Provincial Park beach enhancement, shoreline housing and commercial development. The population on Osoyoos private land also depends on lake levels controlled by a dam. In Ontario, high water levels have eliminated or are threatening three populations. Another population is threatened by quarry expansion and encroaching woody vegetation. Housing development and habitat destruction by dirt bikes are threats to another site. A recently discovered population in a bird sanctuary is dependent upon habitat conditions remaining in their current state.