Scientific Name: Regina septemvittata
Other/Previous Names: Queen Snake
Taxonomy Group: Reptiles
COSEWIC Range: Ontario
COSEWIC Assessment Date and Status Change: April 2010
COSEWIC Status: Endangered
COSEWIC Status Criteria: B2ab(ii,iii,iv,v); C2a(i)
COSEWIC Reason for Designation: This species has a restricted and shrinking distribution in southwest Ontario. It consists of scattered small populations which are isolated due to habitat fragmentation and the species’ limited dispersal capacity. Over the last decade, the number of extant locations has declined and the species’ riparian and riverine habitat has continued to be lost and degraded. The species is limited by its extremely specialized diet and threatened by decline in its prey of freshly moulted juvenile crayfish. Other threats include persecution and effects of invasive Zebra Mussels and Common Reed.
COSEWIC History of Status Designation: Designated Threatened in April 1999. Status re-examined and confirmed in May 2000. Status re-examined and designated Endangered in April 2010.
SARA Status: Schedule 1, Endangered
Date of Listing (yyyy-mm-dd): 2003-06-05 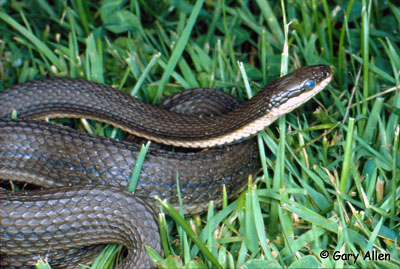 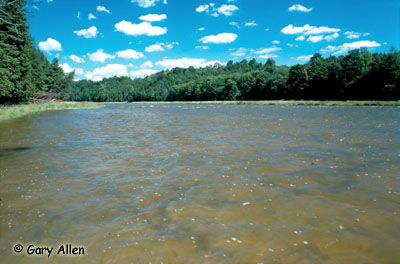 The Queensnake is a slender, medium sized, semi–aquatic snake. Its average snout–vent length is about 40–50 cm, with total length averaging 40 to 60 cm to a maximum of about 90 cm. The dorsal colour is brown or dark olive with three narrow black stripes running down the midline and along each side. The belly is pale yellow or cream with four dark brown to black longitudinal stripes, often becoming mottled with age. (Updated 2017/05/30)

The Queensnake is relatively widespread in eastern North America, ranging from southeastern Pennsylvania, western New York and southwestern Ontario, west to southeastern Wisconsin and south to the Gulf Coast from the Florida panhandle to eastern Mississippi. The Canadian range is highly localized and sporadic and is restricted to southwestern Ontario. The Queensnake occurs west of the Niagara Escarpment, from the northern portion of the Bruce Peninsula, south to Lake Erie and west to Essex County. (Updated 2017/05/30)

Queensnakes are most commonly associated with rocky streams and rivers, but are also occasionally found in marsh, pond, and lake shore habitats. This highly aquatic species is usually found within 3 m of the shoreline and only at sites where there is an abundance of crayfish, its primary food source. (Updated 2017/05/30)

Queensnakes feed almost exclusively on freshly moulted crayfish. In Ontario, they are generally active from late April to late September and likely hibernate communally. In parts of the U.S., female Queensnakes reach sexual maturity in 3 years, and males in 2 years. Mating can occur in either spring or early autumn. The Queensnake is viviparous, with 5 to 23 young usually being born in late August or September. (Updated 2017/05/30)

Loss, fragmentation and degradation of habitat and decline in prey abundance represent the most significant threats to Queensnakes in Ontario. The narrow fringe of riparian habitat necessary for Queensnakes’ survival has been greatly reduced in both quality and quantity. Urbanization surrounding riparian habitat has decreased water quality and increased fortification of banks, water diversion and removal, spread of exotic vegetation, and threats from human presence. In agricultural areas, livestock with free access to riverbanks, farming to the edge of waterways, and clearing of vegetation and debris along shorelines have further degraded shoreline and aquatic habitats and added silt and contamination from increased erosion. Natural and artificially induced plant succession (non–native species), most notably of large woody vegetation and invasive Phragmites, has also reduced habitat quality and abundance at historic Queensnake sites. Additionally, direct human persecution and accidental mortality through human recreational activities further contribute to losses. The Queensnake’s specialized diet makes it exceptionally vulnerable to declines in prey (crayfish) populations. Any factors that negatively impact crayfish will similarly affect Queensnakes. In many areas, the larger non–native Rusty Crayfish (Orconectes rusticus) is displacing native crayfish, though the impact of this introduced crayfish on Queensnakes is currently unknown. Similarly, occupation of Queensnake habitat by Zebra Mussels (Dreissena polymorpha), Round Goby (Neogobius melanostomus), Common Carp (Cyprinus carpio) and invasive, non–native vegetation may threaten some populations. (Updated 2017/05/30)