Most populations of this species occur in small, scattered habitat remnants. Most are isolated so they are threatened by the negative genetic effects of small population size and by demographic stochasticity. Recent surveys have not detected the species at several sites where they were formerly known. Road mortality, ongoing habitat loss and fragmentation are also threats to this small specialized snake.
COSEWIC History of Status Designation: Designated Special Concern in April 1999. Status re-examined and designated Threatened in November 2001. Status re-examined and designated Endangered in November 2010.
SARA Status: Schedule 1, Endangered
Date of Listing (yyyy-mm-dd): 2003-06-05 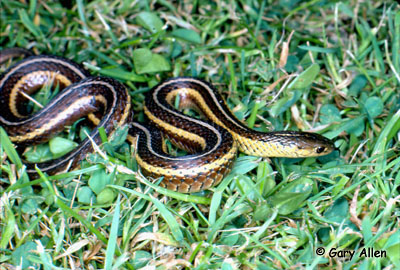 Butler’s Gartersnake (Thamnophis butleri) is a small, non-aggressive gartersnake with three distinct longitudinal yellow stripes on its dark brown back. This snake was first described in 1889 by E.D. Cope. Like most other small Canadian snakes, this species has been poorly studied. It is often confused with two other Thamnophis species coexisting in its range, the Eastern Gartersnake, T. sirtalis, and the Eastern Ribbonsnake, T. sauritus. Butler’s Gartersnake, however, is shorter in total length (38-51 cm), is much more docile and possesses a unique pattern and position of side stripes. The latter facilitates its identification. (Updated 2017/05/30)

Butler’s Gartersnake has one of the most restricted global distributions of any snake in North America. This distribution is patchy and confined to southwestern Ontario, and parts of four U.S. states in the Great Lakes Region (Wisconsin, Ohio, Indiana and Michigan).In Ontario, it occurs in western Essex and Lambton counties from Amherstburg to Errol with disjunct locations at Skunk’s Misery (Lambton and Middlesex counties), Parkhill (Middlesex County) and Luther Marsh (Dufferin and Wellington counties). The Canadian distribution of Butler’s Gartersnake occupies approximately 16% of its global distribution. (Updated 2017/05/30)

Characteristic habitat of Butler’s Gartersnake includes old fields, disturbed sites, urban and industrial sites and Tallgrass Prairie. Essential habitat components include a dense cover of grasses or herbs with a heavy thatch layer and an abundance of earthworms as prey. This snake can be found near small bodies of water (including seasonally dry marshes and swales) in a small number of vacant urban lots (including industrial lands) and parks and in Tallgrass Prairie remnants. The species is difficult to find in its preferred habitat outside of the mating season and is then more frequently observed under rocks and debris. Although overwintering sites have not been directly observed in Canada, it is assumed that this snakehibernates in small mammal burrows, ant mounds, loose fill and/or crayfish burrows. Habitat loss has occurred in the Windsor-Sarnia region in the last 3 decades due to urbanization and agriculture. Skunk’s Misery has lost T. butleri habitat due to agriculture and forest succession, whereas habitat at Luther Marsh may have increased. (Updated 2017/05/30)

In southwestern Ontario, Butler’s Gartersnakes generally are active from April to October. Mating occurs in early spring and 8-10 young are born live from June to September. Sexual maturity is estimated at 2 years and generation time is estimated to be 4 years. This snake feeds primarily on earthworms, which raises some questions as this food source did not occur in its current range until after European settlement. Predators of Butler’s Gartersnake, although unrecorded, are presumably the same as those of other Thamnophis species. The majority of Butler’s Gartersnakes in a population exhibit fairly limited movements. Maximum activity range is less than 1 ha and mean movement distance is 300 m. A small percentage of individuals have been observed moving much farther. (Updated 2017/05/30)

The current disjunct distribution of Butler’s Gartersnake suggests a much wider historical range. Agricultural practices and increased urbanization are the major limits to the species and have contributed to the loss of most potential habitat of Butler’s Gartersnake in Canada. Available habitat is still decreasing and becoming more fragmented into small, isolated patches. This ongoing habitat loss and fragmentation are the major threats. Illegal collection for the pet trade probably occurs in some areas. This species is not commonly available in the pet trade, but is captured for personal collections. The severity of this threat is unknown. Multiple roadkill records exist in Ontario, but population level effects have not been assessed. (Updated 2017/05/30)