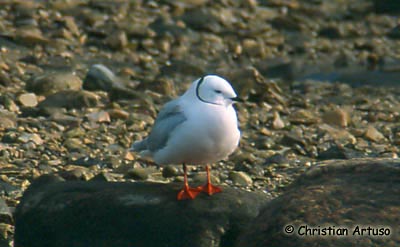 Ross’s Gull is a small tern-like gull, 29 to 32 cm in length, with a buoyant flight. It can be distinguished by its wedge-shaped tail, red feet, grey underwing and narrow black collar round its neck. It has a dove-like head and a black beak. The sexes are alike. In breeding plumage, the Ross’s Gull has a pinkish colour on its head and body, with a deeper pink hue on its breast and belly. In flight, the dark grey of the wings contrasts with the broad white trailing edge. Young Ross’s Gulls have a broad black diagonal band across the inner wing, forming a broad white triangle on the rear wing, and a black tail band.

Ross’s Gull is an Arctic species with a circumpolar distribution. It breeds primarily in northeastern Siberia, with scattered small colonies in Greenland, in the Svalbard archipelago, and in Arctic and subarctic Canada. In Canada, only four nesting locations have been found, three of them in Nunavut (Cheyne Islands, Prince Charles Island, Penny Strait) and one in Manitoba (near Churchill). Given the size of the Arctic and its harsh climate, some breeding sites have possibly gone undetected. This species likely winters along the edge of the pack ice in the Pacific Basin in the northern Bering Sea, in the Sea of Okhotsk, and in the open waters of the Arctic. The worldwide population is estimated at 50 000 birds. In Canada, the species is represented by small, scattered populations, and the total known breeding population in any given year is as high as 10 pairs and as low as none. Since 1980, the Churchill population has had a high of 5 pairs and a low of 1 pair. In 1978, the Cheyne Islands colony peaked at 20 individuals, and it is believed that 10 individuals occupied the unnamed island in Penny Strait in 2005. In 2006, 3 pairs were relocated on this unnamed island. The species appears to be in decline in Canada, but the small number of Ross’s Gulls that are found at any one site in Canada precludes analysis of population trends. Rescue (immigration) from the Siberian population is possible, although it is not known whether the population breeding in Canada constitutes a distinct breeding population separate from the one in the major nesting areas in Siberia.

Ross’s Gulls breed in widely varying Arctic habitats, from marshy tundra to gravel reefs. All sites are located near water and many are close to colonies of Arctic terns. The sites used in Churchill, Manitoba, consist of hummocks covered with grasses, lichens and dwarf willows and lower-lying areas of grasses and sedges with small pools and some shallow lakes. The breeding sites that were occupied on the Cheyne Islands and in Penny Strait were on low-lying gravel reefs close to polynyas—openings in the sea ice that attract birds in late spring.

Ross’s Gulls breed in small colonies, often alongside Arctic terns. It is believed that the gulls reach reproductive maturity in their second year. Weather conditions affect the timing of nesting; in Canada, poor weather conditions in the spring may dissuade the birds from nesting at all in some years. Nests can be a depression in the ground or in a moss cup, or they can be located in sedge tussocks. Clutch size is usually three. Both parents participate in incubation, which takes about three weeks. In Canada, the chicks typically hatch in mid-July and they fledge about 20 days later. A number of predators, including glaucous gulls, herring gulls, Arctic foxes and polar bears, prey on Ross’s Gull eggs and chicks. Adult Ross’s Gulls are pursued by peregrine falcons. Ross’s Gulls are probably opportunistic feeders. At sea, the birds forage at the edge of the pack ice, where they feed mainly on invertebrates and small fish. During the breeding season, insects are a primary component of the gulls’ diet. After breeding, Ross’s Gulls move north into the Arctic Ocean, apparently using drift ice and shelf breaks as far north as open water areas can be found, up to the North Pole. There is a pronounced fall migration eastward past Point Barrow, Alaska, to feeding grounds in the Beaufort Sea in fall and a return movement westward in early winter in response to ocean freezing and foraging opportunities along the pack ice.

Large concentrations of birds gather during fall in the Beaufort Sea, so oil drilling in the Beaufort and Chukchi seas poses a potential threat. Breeding sites in Canada are relatively remote and are not at risk from industrial development at present; however, there are known significant oil and gas reserves in the Canadian Arctic that might be exploited some time in the future. In light of the rapid effects of climate change in the Arctic, any species that is adapted to this region should be considered to be facing an imminent threat. The presence of open water near nesting sites appears to be essential for foraging success, so annual ice and snow regimes are probably important factors in the ability of Ross’s Gulls to reproduce each year. It is not known what effects climate change could have on reproduction in Ross’s Gulls. Human disturbance at nesting sites in the popular Churchill area has caused some birds to abandon their nests.

Ross’s Gull is protected under the Migratory Birds Convention Act, 1994, which prohibits the harming of birds and the disturbance or destruction of their nests and eggs. The species is also protected in Wapusk National Park of Canada under the Canada National Parks Act, although nesting has not been observed there.

Summary of Progress to Date A recovery strategy for the Ross’s Gull is currently in the draft stage and is under its final reviews. The recovery action plan for this species is being developed and is expected to be completed in 2009. The recovery goal for the Ross’s Gull is to maintain the current population size and distribution in Canada. There will be no attempt to increase the number of breeding pairs at this time due to the fact that population numbers have likely always been low in Canada. Summary of Research/Monitoring Activities Data on breeding success, current distribution, and number of pairs of Ross’s Gulls breeding in Canada is being compiled. Complete surveys of most known breeding sites are conducted annually and surveys of selected suitable habitat are conducted every five years. However, thousands of kilometres of suitable but remote coastal breeding habitat in Nunavut go unsurveyed each year. Summary of Recovery Activities Threats to the Ross’s Gull are being examined to determine the urgency and importance of recovery actions within specific locations. Management activities will then be used to lessen the threats and increase the chance of Ross’s Gull persisting in Canada. Education and outreach programs are being developed to raise awareness of the threats to and status of the Ross’s Gull. Conservation and stewardship activities and agreements are being initiated, developed, and implemented for some areas identified as critical habitat. Future management activities will address detrimental human activities, identify ways to provide viewing opportunities for birders and photographers without disrupting breeding, and encourage reporting of public sightings of Ross’s Gulls. URLs Environment Canada: Ross’s Gull:http://www.pnr-rpn.ec.gc.ca/nature/endspecies/sar/db08s17.en.html Surfbirds: Churchill, Canada:http://www.surfbirds.com/trip_report.php?id=166