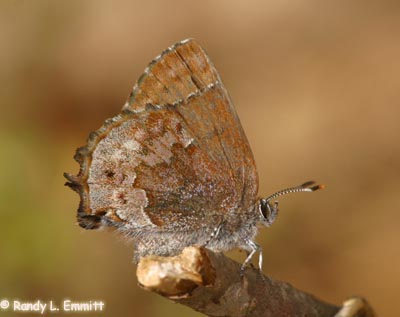 The Frosted Elfin (Incisalia irus) is a hairstreak butterfly with a largely uniform brown upperside and variegated underside which has a dusting of pale scales on the outer third, a markedly disjointed white and dark postmedial line, a short “tail” on the hind wing and a dark “thecla” spot near the base of the tail. The larva is pale green with paler markings which vary between populations in the level of contrast with the background colouration. (Updated 2017/05/24)

The Frosted Elfin occurs as three subspecies, one restricted to Arkansas, Louisiana and Texas, and a second to the coastal regions of the southeastern United States. The third, the nominate subspecies, occurs from Florida north to New England (and historically, southern Ontario) and west to Alabama and Wisconsin. However, there is some controversy as to whether or not the Lupine and Wild Indigo feeding ecotypes of the nominate subspecies represent different species. Both forms are found in the eastern United States but only the Lupine feeder has been found in Canada. The only known Canadian site for this species was near the St. Williams Forestry Station in Haldimand-Norfolk County in southern Ontario. An earlier record from the Pinery Provincial Park has been shown to be based upon a misidentification. (Updated 2017/05/24)

The Frosted Elfin occurs predominantly in oak savannah and pine barren habitats where the larval foodplant Lupinus perennis occurs. In the east, small areas of suitable habitat may be occupied, whereas further west, larger areas are required for the species to persist. The butterfly has a preference for edge areas such as openings in more densely canopied woodlands, right-of-ways, powerline cuts, etc. Suitable habitat seems to have been maintained by occasional fires or grazing, but research shows that within its current range in Wisconsin, occasional mowing is preferable to rotational burns. (Updated 2017/05/24)

The adults emerge in spring and the flight period is usually over by mid-June. Males are territorial. Females oviposit on Lupine flowering spikes, preferring those which are in full sunshine. The larva feeds on Lupine flowers and, later, on developing seed pods. Pupation takes place either in the leaf litter at the base of the host plant or under the ground. Few natural enemies have been recorded. (Updated 2017/05/24)

Reasonably extensive areas of patchily distributed Lupines are required. In the absence of influences preventing succession, the forest canopy in these areas becomes too dense and/or the understorey crowds out the Lupines. In turn, this leads to a reduction in the frequency of flowering or can prevent it altogether. The territorial behaviour of males, the females’ preference for ovipositing only on flowering spikes that are in full sunshine, and the cannibalistic behaviour of larvae all contribute to reduce the effective population size of the species. (Updated 2017/05/24)

Summary of Progress to Date In cooperation with the Karner Blue Recovery Team, the Canadian Wildlife Service and the Ontario Ministry of Natural Resources are preparing a recovery strategy for the Karner Blue and Frosted Elfin in Canada. The recovery goals and objectives are aiming to create enough suitable habitat for the Karner Blue in three geographically distinct areas (Northfolk, Lambton and Northumberland Counties) so that the species can be reintroduced into Canada. By completing recovery actions for the Karner Blue, especially involving the restoration of oak savannah and tallgrass prairie habitat, the Frosted Elfin and Persius Duskywing will benefit, as they depend on the same habitat as well (the two species, however, are only known historically from the Norfolk location). Recovery efforts for the Karner Blue are much more advanced than for the Frosted Elfin and Persius Duskywing, largely due to the significant progress made on recovery of this species in the United States. Summary of Research/Monitoring A research study, led by York University in 2004, assessed the suitability of each of the restored oak savannah areas in Ontario targeted for Karner Blue reintroduction by collecting quantitative field data to determine if they meet a minimum ecological standard for reintroduction. Although none of the sites met all the minimum standards for Karner Blue reintroduction, further restoration and management is possible to improve the habitats so that they are suitable for reintroduction. Specific recommendations, required to achieve minimum standards for reintroduction, were provided in the study for each area. Activities based on these recommendations are ongoing. At Alderville First Nation, a Black oak savannah and tallgrass Prairie project is underway that aims to improve and protect Karner Blue and Persius Duskywing butterfly habitat, and associated rare tallgrass habitats. A volunteer Wild Lupine planting program has been underway for seven years, and the success of these plantings is being assessed through the measurement of Lupine development, density, and survival. The evaluation of the lupine population is necessary to ensure the plants are self-propagating and the site is suitable for supporting viable populations of Lupine. Protocols for transport and release of butterflies have been developed in the U.S. and the Toronto Zoo has been working on a captive rearing protocol for the Karner Blue. In 2006, Pinery Provincial Park completed a study on second brood nectaring plant availability. The results will be used to guide more restoration work to increase diversity of second brood nectaring species. Summary of Recovery Activities There has been a number of oak savanna restoration projects carried out in each of three target areas for reintroduction (Lambton County, Norfolk County, and Northumberland County). These undertakings have provided a great deal of experience and knowledge in the reclamation of sites. Lambton County – Lake Huron shorelineAt Pinery Provincial Park, habitat improvement initiatives have been underway since 1997. The Park has regularly collected and planted Wild Lupine seeds since 1993 to increase regeneration and also to connect this location with the Port Franks location to facilitate dispersal between populations. Seeds from nectar producing flowers, such as Butterfly Milkweed (Asclepias tuberosa) and New Jersey Tea (Ceanothus americanus), have been planted to provide a food source to adult butterflies. Outreach material on the Karner Blue butterfly is on display at the visitor’s centre and park tabloids/newsletters are released regularly to inform the public of recovery activities. The Karner Blue Sanctuary in Port Franks also has undergone habitat restoration since 1992 through the removal of tree plantations and thinning of forests to open up the area and increase the growth of the former oak savannah vegetation. Nectar source plantings have been conducted in the past at this location. Norfolk County – St. Williams The St. Williams Forest is managed as a conservation reserve by the Ontario Ministry of Natural Resources. Its combined diversity of ecological communities (including oak savanna, oak woodland, other tallgrass communities; and sand barrens, forests, wetlands, and streams) supports one of the highest concentrations of species at risk in Ontario and Canada. A goal of the management of this area is to maintain and restore native ecological communities and their associated species. The area has undergone restoration (thinning and controlled burns) to reclaim habitat in locations historically known to support both the Karner Blue and Frosted Elfin. Northumberland County – Rice Lake PlainsA Joint Initiative among the Nature Conservancy of Canada, Ontario Parks, County of Northumberland, Lower Trent Conservation, Ganaraska Region Conservation Authority, the Wetland Habitat Fund, conservation partners, and the local landowners is working together to protect and steward one of Ontario's last remaining sites of tallgrass prairie and black oak savanna and the species that live there. Numerous activities are underway in the area. With assistance from the Habitat Stewardship program, field reclamation measures to improve or create tallgrass and savannah habitat have been undertaken at Alderville First Nation, including restoring original vegetation by planting native prairie seeds, removing encroaching growth, and conducting controlled burns. Wild Lupine plantings have occurred annually since 2002 to increase the population and density for Karner Blue Butterfly habitat. There are currently 32 ha of savanna and tallgrass habitat available, with another 9 ha of old field slated for restoration in the future. In 2007, Alderville First Nation is planning to seek out local residents and inform them of the value of tallgrass habitat and the species at risk it supports. Articles in community newsletters, displays, websites, and audio/visual presentations are keeping the local public aware of activities, volunteer opportunities, workshops, and meetings to support the stewardship for the Karner Blue. Moreover, the Toronto Zoo has produced outreach materials (e.g. The Oak Savannah and Karner Blue Butterfly Wheel) for educational and fundraising purposes. URLs Ontario’s Biodiversity: Species at Risk: Frosted Elfinhttp://www.rom.on.ca/ontario/risk.php?doc_type=fact&lang=&id=56 Butterflies of Canada: Frosted Elfinhttp://www.cbif.gc.ca/spp_pages/butterflies/species/FrostedElfin_e.php Butterflies of Canada: Persius Duskywinghttp://digir.agr.gc.ca/spp_pages/butterflies/species/PersiusDuskywing_e.php Ontario’s Biodiversity: Species at Risk: Karner Bluehttp://www.rom.on.ca/ontario/risk.php?doc_type=fact&lang=&id=57