Scientific Name: Alasmidonta heterodon
Taxonomy Group: Molluscs
COSEWIC Range: New Brunswick
COSEWIC Assessment Date and Status Change: December 2021
COSEWIC Status: Extirpated
COSEWIC Status Criteria:
COSEWIC Reason for Designation: This freshwater mussel was previously known in Canada from only the Petitcodiac River drainage in New Brunswick. It disappeared after construction of a causeway across the river in 1967/68, presumably because of the loss of the host fishes which are required for completion of the mussel species life cycle. The species has not been found since, despite intensive systematic searches of its former habitat. The causeway has been partially removed, and is no longer fully blocking access to the river for the host fishes. Some host fishes have been observed in the river but the mussel remains Extirpated in Canada.
COSEWIC History of Status Designation: Extirpated by 1968. Designated Extirpated in April 1999. Status re-examined and confirmed in May 2000, November 2009, and December 2021.
SARA Status: Schedule 1, Extirpated
Date of Listing (yyyy-mm-dd): 2003-06-05 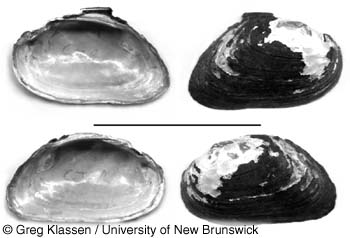 This freshwater mussel is small (< 55 mm long) and roughly trapezoidal in shape. The outside of the shell is brown or yellowish-brown, with greenish rays visible in young or pale-coloured specimens. The nacre is bluish or silvery white and is iridescent in the posterior part of the shell. The hinge teeth are small but distinct. This species is unique in that it has two lateral teeth in the right valve and one in the left; other species have two lateral teeth in the left valve and one in the right.

The only recorded Canadian location for the Dwarf Wedgemussel is the Petitcodiac River drainage of New Brunswick. A specimen was last collected there in 1960, at which time the species was classified as being common. It became extirpated in 1968, following construction of a causeway. The species has been declared endangered in the U.S., where it occurs in coastal rivers from North Carolina to the Connecticut River in Vermont.

The mussel is found in small streams to medium-sized rivers with slow to moderate current and fine sediment, sand or gravel substrates. It appears to have poor tolerance for suspended silt. Stream-side vegetation seems to be required.

The parasitic larvae (glochidia) are released in the spring. The host fish species for the glochidia in the wild are not known, but five species of fish are able to serve as hosts in the laboratory. Of these, only Atlantic Salmon (Salmo salar) occurred in the Petitcodiac watershed. The maximum life span of the mussel is believed to be 12-18 years.

The species requires the presence of host fish species for the parasitic larval stage of development. It is vulnerable to pesticide and metal contamination, and to low oxygen levels. Impoundment of rivers has been a major negative factor on continued persistence of this species throughout its range, due to dams blocking movements of host fish species. In 1967/68, a causeway was built across the tidal part of the Petitcodiac River, which has severely restricted the passage of fish into the freshwater stretches of the river and its tributaries.