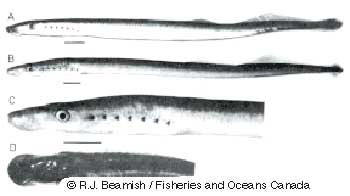 The Morrison Creek population of Western Brook Lamprey (hereafter “Morrison Creek Lamprey”) is a small (10–18 cm), jawless fish with a circular-shaped mouth, and a scaleless body that resembles an eel. The species is “polymorphic”, meaning two distinct life history forms exist: non-parasitic and parasitic, both indistinguishable as larvae. As adults, the non-parasitic form is characterized by dark colouration, small size and blunt teeth; the parasitic form is characterized by silvery sides, a white under-belly, a shorter larval stage, delayed sexual maturation and sharp teeth. The taxonomic relationship between the Morrison Creek and other lamprey populations is currently unclear.

The species is endemic to the Morrison Creek watershed in Courtenay, British Columbia. There are no quantitative population estimates for either life history forms in Morrison Creek; however, data collected from 1977 to 2012 suggest that the parasitic form has decreased over that period.

Morrison Creek is a 19 km-long headwater stream fed by wetlands and springs, which help to maintain a relatively consistent cool stream temperature year-round. The stream bed is comprised of compacted sediment deposited by melting glaciers and ice sheets, patches of small gravel, and a large quantity of stream debris. The habitat preferences of Morrison Creek Lamprey are largely inferred from those of Western Brook Lamprey in other watersheds. Nesting habitats in stream beds are comprised of sand and gravel. Larvae younger than one year congregate in silty, shallow areas along stream edges. For Western Brook Lamprey in other watersheds, larvae two years and older were found to reside in deeper pools with leaf and sand substrate. During the winter months, lampreys are commonly found hiding in rock crevices or under other cover along the perimeter of the stream. In times of distress, it is thought that deep sand and soft surfaces provide vital refuge for lamprey.

Morrison Creek Lamprey spawn in the spring. To create a nest, adults carve a depression in the sandy, gravelly streambed. The species breeds in single pairs or groups with multiple males and females. Western Brook Lamprey eggs in other watersheds have been observed to hatch within 30 days. Larvae remain within the streambed gravel for an additional two to three weeks, before being swept downstream and burrowing into the mud to filter feed. The species remains larval for roughly three to seven years before metamorphosing into an adult in late summer or early fall. Some individuals may metamorphose into the parasitic marifuga variety, although the reason for this transformation is unknown. Non-parasitic lampreys spawn immediately following metamorphosis, while the parasitic form continues to develop and feed for a year before it spawns. Both forms die after spawning. The Morrison Creek Lamprey remains in freshwater throughout their lifespan of approximately four to nine years. Potential predators include Coho Salmon, Coastal Cutthroat Trout, Rainbow Trout, Coastrange Sculpin, Prickly Sculpin, Dolly Varden, and ravens. As larvae, Morrison Creek Lamprey feed on organic materials on the stream bed and suspended in the water. As adults, the parasitic form feeds predominantly on live fish; however, the species upon which Morrison Creek Lamprey prey are still unknown.

Primary threats to the species are land use activities, which have the capacity to alter aquatic habitat; water withdrawals and/or impoundment, resulting in changes to water availability and levels; release of deleterious substances into Morrison Creek Lamprey habitat; nutrient input through groundwater and/or surface flows from point or non-point sources; and human impacts on prey abundance. The Morrison Creek Lamprey is also restricted to a single watershed, increasing its vulnerability to threats.

The Western Brook Lamprey, Morrison Creek population, is protected under the federal Species at Risk Act (SARA). More information about SARA, including how it protects individual species, is available in the Species at Risk Act: A Guide.