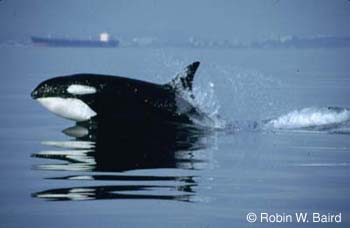 The Killer Whale (Orcinus orca) is a member of the dolphin family, Delphinidae. It is easily recognized by its distinct black and white patterns. The Killer Whale is known as 'aarluk' in Inuktitut and has the following characteristics: • Tall, uniquely-shaped dorsal fin on individual whales; • Dorsal fin height of males is greater than that of females; • Pectoral fins and tail flukes are longer in males than in females; • Tail fluke tips curve downward in males; • Unique grey-white area at the base of the dorsal fin, known as the ‘saddle patch’, helps to distinguish individuals; • Longest male recorded at 9.0 m; longest female at 7.7 m; • Heaviest male weighed 6,600 kg (7.65 m); heaviest female 4,700 kg (6.58 m); and • Calves range from 2.2 to 2.5 m in length at birth.

Killer Whales are found in all of the world’s oceans. Their Canadian distribution includes the coastal waters of British Columbia from Haida Gwaii in the north to Vancouver Island. Little is known about the range and distribution of the Northwestern Atlantic/Eastern Arctic Killer Whales. Historically, they were common in the Gulf of St. Lawrence and St. Lawrence estuary; however, they are now most often recorded in the coastal waters of Newfoundland, particularly in the Strait of Belle Isle. Sightings in the eastern Arctic have increased over the past few decades, particularly within the Hudson Bay region, whereas Killer Whales are uncommon in the western Arctic. The specific habitat requirements and life history in the Northwestern Atlantic/Eastern Arctic Killer Whales are not well understood. They can tolerate wide ranges of salinity, temperature and turbidity.