This regionally restricted Canadian endemic is known only from five sites within the limestone barrens on the island of Newfoundland. Since it was last assessed as Endangered in 2000, this species continues to experience declines in total population size and increases in the number and severity of biotic threats, which include the non-native Diamondback Moth and two pathogens.
COSEWIC History of Status Designation: Designated Endangered in April 1997. Status re-examined and confirmed in May 2000 and May 2011.
SARA Status: Schedule 1, Endangered
Date of Listing (yyyy-mm-dd): 2003-06-05 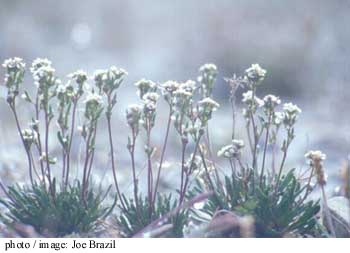 Long's braya is a scapous perennial (flower-stalk grows directly from the ground) with fleshy, basal leaves that are greyish-green to blue. It stands erect at a height of 1-10 cm or more. A deep taproot anchors the plant and reaches adequate moisture. Its scape is green to purplish and pubescent with simple, branched hairs. The flowers are individually connected to the central scape on stems that often bear a single leaf. Leaves are spatula-shaped with pointed ends and measure 1-4 cm in length, 1-3 mm in width. As with all members of the mustard family, each flower has four tall and two short stamens (male fertilizing organs). The white petals have claws that are usually tinged with bluish- or reddish-violet. Each small flower is held within a protective layer of four oval, green to purple-tinged sepals. The septum margins are broadly expanded at the base, forming a sack-like, hairless pouch. A single row of 10-16 seeds, each 1-1.5 mm long, sits at the bottom of each pouch. Long's braya is similar to Fernald's braya except for its pouch, which is hairless; its petals, which are larger; and its seedpods, which are not quite as purple.

The Long's braya is endemic to Newfoundland, where it is found at Sandy Cove, Yankee Point, and Savage Point in the Strait of Belle Isle. Sandy Cove supports two populations: one, discovered in the mid-1920s, has been largely destroyed by quarry activity and now consists of only three specimens; the other is comprised of 35-50 plants. Yankee Point supports more than 200 individuals, many of which are robust, growing in a parking area subject to continuous traffic by large gravel trucks. This group is also at risk of being bulldozed. The size of the Savage Point population used to be unknown. Population estimates indicated that there were a total of 6000 plants within 3 populations of Long's braya. According to estimates from the summer of 2000, there are approximately 7000 plants in 4 sites. The populations appear to be stable.

Long's braya is found in habitats with tundra-like vegetation and shallow, calcium-rich soils, areas typically well-drained and often windswept in the winter. It grows on limestone substrates such as may be found in turfy areas between limestone rocks or in areas with loose limestone gravels. The populations are most robust in recently disturbed areas. In summer, the plants receive little or no shade; in winter they are often exposed to extreme cold and scouring winds. Frost prevents other plants from becoming established in these sites.

Long's braya is self-pollinating and has a highly successful seed set. Its seeds rely on wind for dispersal, but the wind only carries the seeds short distances, which explains why the species cannot establish itself in new areas once a site is destroyed. It is typically found in small, isolated colonies. In recently disturbed sites, Long's braya is often a dominant member of the plant community, but on less recently disturbed sites its populations consist of only a few scattered individuals, probably as result of competition from other species. The plant dies back to the crown in winter and regrows each spring. Individual plants can live for several years.

The population is easily maintained in areas where there are continued natural disturbances, given an appropriate habitat and seed source, although the extraction of resources and uncontrolled development do present a threat to the species.. A large percentage of Newfoundland's coastal limestone barrens have been destroyed over the past 20 years, since many communities along the northwestern coast have used them as a source of gravel for local construction. While man-made locations have provided suitable habitat, too much traffic or quarrying can destroy a site. Predation by moth larvae and traffic from all-terrain and other vehicles become limiting factors when braya population levels are low. Recently, the newly established threat of mortality due to a non-native insect is being investigated; at this point, the effects of the insect on the recovery of the plant cannot be determined.

Long's Braya is protected by the Newfoundland and Labrador Endangered Species Act. Under this Act, it is prohibited to kill, harm, trade, or possess members of this species.