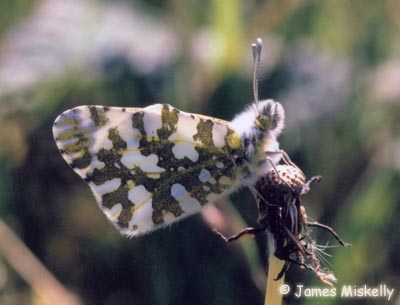 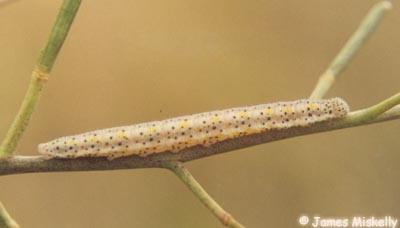 This relatively small butterfly belongs to the subfamily Pierinae, which are usually white in colour. Female Island Marbles are often yellowish, and may reflect ultraviolet. The flight of the butterfly is straight, fluttering and usually fast. When basking, the wings are closed and oriented sideways to the sun. The dappled pattern on the wing characterizes the species.

This subspecies of the Island Marble was historically found in British Columbia, on Gabriola Island and on Vancouver Island from Nanaimo in the north, southward along the eastern edge of the island to Beacon Hill Park, Victoria. It was recorded only at lower elevations, and was apparently never common on Vancouver Island. Recently, the subspecies was found on San Juan Island in Washington State. There is the possibility that it still occurs on three small islands that are located between Vancouver and San Juan islands. There are two other subspecies of Island Marble. One of these is found in drier habitats in British Columbia, Washington and northwestern Oregon, east of the Coast Range and Cascade Mountains. The other subspecies is found in the northern Yukon and adjacent Alaska.

There are no published accounts of the habitat of the Island Marble. From locality labels on the 14 specimens that are known to exist in museum collections, it appears that the butterfly inhabited open grassland in Garry Oak woodland. This type of habitat still occurs on San Juan Island.

Because the subspecies disappeared from Canada before 1910, it is unlikely that the spread of introduced weed species and post World War I growth of the human population were factors in its extirpation. The most likely cause for its loss is the elimination of the larval food plant by grazing sheep and/or cattle in the low, flat habitat occupied by the Island Marble.