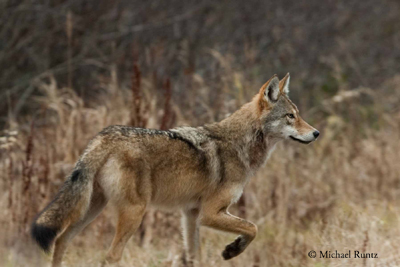 The taxonomy of the Eastern Wolf is under debate; in the COSEWIC Assessment and Status Report (2015) the Eastern Wolf is considered to be Canis sp. c.f. lycaon, a wildlife species as defined under SARA that is worthy of conservation because of its distinctiveness, persistence, and significance as a large carnivore, and likely part of the last remnant population of the large Canis from eastern North America. The Eastern Wolf is an intermediate-sized canid weighing an average 24 kg for females and 29 kg for males. Pelage often is described as reddish-brown/tawny, but is highly variable.

The current distribution of Eastern Wolves is thought to be restricted to the mixed coniferous-deciduous forests of central Ontario and southwestern Québec, namely the Great Lakes-St. Lawrence Forest Region. Eastern Wolves were extirpated from most of their original range in North America due to eradication of large Canis over much of the past 400 years. The estimated minimum population size is 236 mature individuals, mainly located within protected areas. There is little population trend information outside of Algonquin Park, the site with the most Eastern Wolf records to date, which appears to be stable.

Eastern Wolves typically occur in deciduous and mixed forest landscapes with low human density, south of the Boreal Forest Region. Both den and rendezvous sites tend to be located in conifer/hardwood-dominated landscapes near a permanent water source. Territory size is often near 200 km².

Eastern Wolves live in family-based packs composed of a breeding pair and offspring from the current and previous years. Females give birth to an average of five pups in late April - early May and they remain at the den site for 6 - 8 weeks. Dispersing juveniles leave the pack after 37 weeks. Eastern Wolves diet constitute mainly of White-tailed Deer (Odocoileus virginianus), Moose (Alces americanus) and Beaver (Castor canadensis).

The main threat for Eastern Wolves outside the protected areas likely is human-caused mortality from hunting and trapping, which is facilitated by road networks. Based on research in Algonquin Park, excessive mortality likely limits dispersal, and alters pack breeding dynamics, leading to another main threat, gene introgression (hybridization) with Eastern Coyotes due to the lack of conspecific mates. Habitat loss and fragmentation associated with road networks and urbanization is expected to continue outside protected areas and likely will deter population expansion. Negative public attitudes towards wolves, and established Eastern Coyote territories, may limit population expansion.