This highly aquatic frog has a small Canadian distribution within the populated and highly modified Fraser River Basin in southwestern British Columbia. It currently occurs at four sites, isolated from one another, and has been extirpated from an additional three sites. One extant population is near extinction, and the remaining populations are small and vulnerable to disturbance and stochastic events. Habitat loss and fragmentation, hydrological alteration, disease, introduced predators, and poor water quality continue to threaten remnant populations.
COSEWIC History of Status Designation: Designated Endangered in an emergency assessment on 13 September 1999. Status re-examined and confirmed in May 2000 and in May 2011.
SARA Status: Schedule 1, Endangered
Date of Listing (yyyy-mm-dd): 2003-06-05 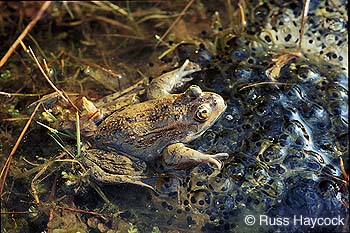 The Oregon Spotted Frog, Rana pretiosa, is a member of the family Ranidae, or true frogs. Prior to 1997, the name Rana pretiosa was applied to both R. pretiosa and R. luteiventris (Columbia Spotted Frog) as currently known. Therefore, when interpreting research conducted prior to 1997, a reader must note the geographic location of the study, which will indicate the species in question. The Oregon Spotted Frog is a medium-sized frog with a body length in adults of 60 to 80 mm. The background colour is brown or reddish and becomes more reddish as the frogs age. The common name of the species is in reference to the dark spots with light centres that are present over the head, back, and legs. The underside of the legs and belly of juvenile frogs is white or cream-coloured, changing to orange or red in adults. The distribution of the Oregon Spotted Frogoverlaps with that of the Northern Red-legged Frog (R. aurora), with which it may be confused. The two species can be distinguished by subtle differences in appearance, including lack of green mottling in the groin, shorter legs, and more upturned eyes in the Oregon Spotted Frog. The Oregon and Columbia Spotted Frogs are very similar in appearance but are not found in the same areas. This species is sensitive to contaminants in its environment including nitrates and nitrites, prevalent in run-off from agricultural areas. The Oregon Spotted Frog may serve as a bioindicator of the condition of shallow wetlands that it occupies. (Updated 2017/06/13)

The Oregon Spotted Frogis usually associated with large (> 4 ha) wetlands with emergent or floating vegetation within forested landscapes. The frogs are highly aquatic and almost always found in or beside water. In spring, egg-laying occurs in shallow warm water in seasonally inundated areas. In summer, the frogs forage in shallow wetlands. In winter, they often over-winter in springs and seepages that do not freeze completely or in low-flow channels or ditches, or they may bury into silty soil or vegetation at such sites. (Updated 2017/06/13)

The frogs become active and begin breeding in spring after air temperatures reach approximately 5°C. Males produce a characteristic advertisement call consisting of a rapid series of short, low-pitched clucks, and usually call under water. Egg-laying is temperature-dependent and typically begins in March and continues for 2 to 4 weeks in British Columbia. Egg masses, each with up to 1500 eggs per mass, are laid in communal clusters with the tops of egg masses often exposed to the air. The placement of egg masses in shallows makes them vulnerable to freezing and desiccation caused by wind or receding water levels. In some years, embryonic survivorship can be zero. Survival of tadpoles can also be extremely low due to depredation. Most movements of individual frogs between breeding and wintering habitat are localized, but the frogs are capable of longer movements of up to about 3 km along water courses. (Updated 2017/06/13)

The greatest threat to the species in Canada is continuing loss of suitable wetlands and associated terrestrial habitat and accompanying habitat fragmentation and population isolation. Additional threats include alteration of site hydrology, which can adversely affect egg-laying habitat and increase mortality of eggs; pollution affecting embryonic or tadpole survival; diseases such as chytridiomycosis and iridoviruses; and predators or competitors such as introduced American Bullfrogs, Green Frogs, and fish. (Updated 2017/06/13)

The Oregon Spotted Frog is protected by the British Columbia Wildlife Act. Under this Act, it is prohibited to kill, collect, or hold captive any amphibian without a permit.

Summary of Progress to Date The Oregon Spotted Frog recovery team aims to increase all three Oregon Spotted Frog populations to self-sustaining levels, as well as reintroduce the frog to historic sites and survey for undetected populations. The team is increasing the habitat quantity and quality at occupied sites and is monitoring the effectiveness of habitat management techniques. Husbandry techniques have been developed allowing the team to rear Oregon Spotted Frogs in captivity for population augmentation or reintroduction. Recovery planning is guided by research that clarifies habitat requirements and threats and that assesses the effectiveness of alternative recovery strategies. Summary of Research/Monitoring Activities Identifying suitable habitat has been a high priority for the recovery team. Radio telemetry projects have provided valuable information on the frog’s habitat use. As the team’s understanding of the frog’s habitat requirements has improved, they have been able to inventory potential breeding habitat at historically occupied sites and nearby existing sites. A demographic sensitivity analysis is being conducted to identify the best developmental stage for frogs to be released into the wild. In order to make this assessment and undertake a population viability analysis, researchers have conducted field studies to determine the reproductive output and survival rates of frogs, the current population size, the sex ratio, and other variables. The Oregon Spotted Frog population increased between 1999 and 2003 at one site. Researchers are assessing whether this increase was due to habitat restoration work or simply a fluctuation of the population. In order to gain a better understanding of the Oregon Spotted Frog’s demographics in Mountain Slough, BC, frogs were trapped during breeding and information on their sex, mass, and length was recorded. Twelve of these frogs, with a mass greater than 22 grams, were selected for transmitter attachment to determine frog movements from breeding locations. The transmitter allows the frogs to be tracked, using a radio receiver, and their position over a 20 week period (the battery life is 20 weeks) was logged using a global positioning system. Summary of Recovery Activities The primary reason for the Oregon Spotted Frog’s decline is the loss of shallow wetlands with stable water levels, which are required for egg-laying. Fluctuating water levels cause egg masses to dry out. One of British Columbia’s Oregon Spotted Frog populations was rapidly declining for this reason. Therefore, since 1999, the recovery team has monitored egg masses at this site and collected egg masses at risk of drying out. These eggs are reared in captivity and the froglets are returned to the wild population. At the same time, a longer term approach is being taken to habitat degradation. Some habitat has been restored since 1999. This includes sites whose hydrology has been managed to provide more stable water levels. For example, a deep-water well was constructed at one site to minimize the effect of droughts on water levels. Furthermore, introduced Bullfrogs are controlled because they exert considerable predation pressure on the Oregon Spotted Frog. Reed Canary Grass, another invasive exotic, degrades the frog’s habitat and is being controlled at some sites. Beavers became numerous over the 1990s at one site and significantly altered the site’s wetland, reducing the amount of shallow wetland edge, which is crucial habitat for the Oregon Spotted Frog. Therefore, Beavers are being removed from this site. A captive breeding program has been successfully established and will provide frogs for future reintroductions. The Vancouver Aquarium Marine Science Center actively participates in this program. They released 140 Oregon Spotted Froglets into marshland on the outskirts of Agassiz in 2002 and will continue with these activities every year until the population has been fully recovered. URL’s: Nature Canada, Endangered Species:http://www.cnf.ca/species/critters/oregon.html BC Frog Watch factsheet:http://wlapwww.gov.bc.ca/wld/documents/oregonspfrog.pdf Vancouver Aquarium Marine Science Center:http://www.vanaqua.org/conservation/oregon-spotted-frogs.html Greater Vancouver Zoo:http://www.gvzoo.com/Codes/oregon.html