Scientific Name: Taxidea taxus jacksoni
Taxonomy Group: Mammals
COSEWIC Range: Ontario
COSEWIC Assessment Date and Status Change: November 2012
COSEWIC Status: Endangered
COSEWIC Status Criteria: D1
COSEWIC Reason for Designation: Fewer than 200 of these large weasels remain in southwestern Ontario, where they are vulnerable to land-use changes and mortality from vehicles. Recent surveys suggest that the population is stable but threats continue or are increasing (e.g. road density) and the population remains at risk.
COSEWIC History of Status Designation: The species was considered a single unit and designated Not at Risk in 1979. Each subspecies was given a separate designation in May 2000. The jacksoni subspecies was designated Endangered. Status re-examined and confirmed in November 2012.
SARA Status: Schedule 1, Endangered
Date of Listing (yyyy-mm-dd): 2003-06-05 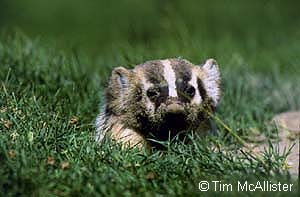 The American Badger is a heavy-bodied, short-legged and short-tailed member of the weasel family. The body fur is yellowish-grey and grizzled on the back. The head has a distinctive pattern: the muzzle, crown and back of the neck are dark black-brown with a mid-dorsal stripe that runs from the nose over the top of the head to the shoulders; the ears are white trimmed with black; and the cheeks are white with a black crescent-shaped spot between the eyes and the ears. The feet are black. The front paws are armed with extremely long, stout claws for digging, while the claws on the hind feet are short and flattened for scooping away soil dislodged by the front feet.

The range of the jacksoni subspecies of the American Badger includes the area around the Great Lakes on both sides of the Canada-US border. In Canada, the subspecies has a very restricted range and now occurs in extreme southwestern Ontario south of the Bruce and Niagara peninsulas. The size of the population is estimated at 0 to 200 individuals, and trends are unknown. It is completely isolated from all other badger populations. There may also be a very small number of badgers in northwestern Ontario immediately north of the Minnesota border.

The habitat requirements of the American Badger are not well understood, however friable soil suitable for badgers to burrow in and to support small burrowing mammals upon which badgers prey appears to be a key element. Open habitats, whether natural (grasslands) or man-made (agricultural fields, road right-of-ways, golf courses), are generally used. Little is known about badger habitat in southern Ontario, but it appears to be severely fragmented by human development, and individual badgers are at high risk of being killed on roads.

Badgers are mostly nocturnal, but can be active during the day, particularly in the mornings. Their home ranges vary from 2 to 500 square kilometers, depending on region and habitat suitability; males usually have much larger home ranges than females. The size of an individual's home range is remarkably stable form year to year. Because they rest, store their food and raise their young in underground dens, burrows are at the centre of a badger's daily activities, and suitable burrows are frequently re-used. Burrows are often dug in pursuit of prey and can vary greatly in their characteristics. Dens for raising young are more complex than those used for resting during the day and have a larger soil mound at the entrance. During the winter, badgers can go into torpor, but the amount of time spent in this state varies greatly between individuals and from year to year, with some individuals remaining active throughout the winter. Badgers are promiscuous, with breeding occurring in July and August, but implantation is delayed until February (after the eggs are fertilized, their development is arrested for several months until implantation into the uterus occurs and then the fetus develops quickly during the actual gestation period). One to five young are born in late March or early April. Juveniles usually disperse from the natal den in June or July. They move over long distances (up to 52 km for females and 110 km for males) through seemingly unsuitable terrain. Males do not breed in their first year, but females mate during their first summer. Badgers are carnivores and are adapted to capturing small burrowing mammals, which is their primary diet in most locations. They pursue their prey and can dig very quickly to catch rodents inside their burrows. However, they are opportunistic feeders and supplement their diet with a wide variety of mammals, birds, eggs, reptiles, amphibians, invertebrates and even plants. In southwestern Ontario, Woodchucks (groundhogs) and Eastern Cottontails are their main prey. Like most members of the weasel family, badgers are fierce fighters when cornered or attacked. In southern Ontario they have few predators, other than humans, however they suffer from fairly high mortality rates, especially as a result of farming operations and collisions with vehicles on roads.

Primary limiting factors include isolation of the small population, habitat fragmentation, an increase in agriculture (annual crop production and clearing of residual native vegetation), reduction in prey, and roadkills.

Summary of Progress to Date A recovery team has been formed for the American Badger jacksoni. Summary of Research/Monitoring Activities A badger monitoring project was initiated in 2001. Historical records were used to estimate the badger’s former distribution and abundance. Outreach materials promote badger awareness and reporting across Ontario. Badger reporting fact sheets and media releases have proven very successful in securing badger reports and other information from the general public. Suspected den sites are surveyed for activity and cameras are used to monitor the badger; motion-sensitive cameras set up outside of suspected den entrances in suitable habitat photograph the animals as they pass by the camera. The recovery team conducts habitat assessments of areas surrounding badger reports in an effort to identify trends and to identify critical habitat requirements of badgers in Ontario. The Ontario Ministry for Natural Resources (OMNR) and the recovery team seek the public’s assistance in providing information about badgers. The public is encouraged to report sightings to Ron Gould, recovery team chair (ph. (519) 773-4745 or email ron.gould@mnr.gov.on.ca) or to a local OMNR office. Badgers found dead or injured along roadsides also provide valuable information to biologists and the public is encouraged to promptly report the location of roadkills for pickup by the OMNR. Genetic analyses are being conducted on hair samples collected from live or road-killed badgers, pelts and stuffed specimens to determine the relationship with other badger populations and subspecies. Summary of Recovery Activities Habitat loss and incompatible agricultural practices present a significant threat to badgers. Recovery in Ontario depends on habitat stewardship by private landowners and other land managers. Furthermore, as mentioned above, badger sightings reported by the public provide important information to biologists. Therefore, outreach is an important component of the recovery program, including several information and recovery workshops conducted across the province each year.