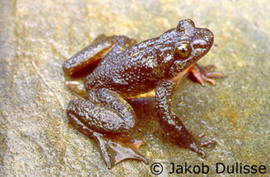 Adult Rocky Mountain Tailed Frogs are small frogs with a large head, a vertical pupil, broad and flattened outer hind toes and no ear drum. They vary in colour from tan or brown to olive green or red, and there is often a distinct, dark-edged copper bar between the eyes. Males have a short, conical extension of the cloaca, the source of the name “tailed frog”, which is used for copulation. The tadpoles possess an oral disc modified into a sucker for clinging to rocks in swift currents. They are mottled black and tan with a prominent, black-bordered white spot at the tip of the tail. The two species of tailed frogs, genus Ascaphus, are among the most primitive living frogs in the world and are specialized for life in fast-flowing streams. Rocky Mountain Tailed Frogs are also one of the longest lived of all North American frogs and the slowest to develop, spending 3 years as tadpoles and not attaining sexual maturity until 7 – 8 years of age. (Updated 2017/06/14)

Rocky Mountain Tailed Frogs are restricted to small, permanently flowing, middle elevation creeks in coniferous forest. They are most often associated with rapidly flowing, step-pool streams with streambeds composed largely of smooth rocks, cobbles and boulders, rather than silt, sand or pebbles. (Updated 2017/06/14)

Tailed frogs have low reproductive rates compared to other frogs, laying relatively small clutches of 50 – 85 colourless, pea-sized eggs every other year. They are cold-adapted and can withstand temperatures only as high as 21°C. Adult Rocky Mountain Tailed Frogs are nocturnal and extremely site-specific, generally dispersing no more than 20 m in a year. The tadpoles eat mainly diatoms scraped from submerged rocks, but transformed frogs will eat a wide variety of terrestrial arthropods. Predators of Rocky Mountain Tailed Frogs include American Dipper, Cutthroat Trout, Garter Snakes, and Western Toad. (Updated 2017/06/14)

Major threats to Rocky Mountain Tailed Frogs in Canada include increases in stream sedimentation, alteration of hydrological regimes, loss of riparian forest habitat and headwater linkages, stochastic environmental and demographic fluctuations due to low population size, and climate change resulting in stream habitat contraction. Human activities associated with logging, mining and road building can exacerbate these threats. Wildfires can have a significant, negative, short-term effect on abundances of Rocky Mountain Tailed Frog tadpoles; how­ever, this species may be able to recover from wildfire within a decade. Epizootic chytridiomycosis disease caused by the fungus Batrachochytrium dendrobatidis has been identified as a major threat to amphibian populations around the world, but at present there is no evidence of significant infection or disease among Rocky Mountain Tailed Frogs. A ban on mining exploration and development under the Flathead Watershed Area Conservation Act has reduced threats in the Flathead portion of the species’ range. (Updated 2017/06/14)

Summary of Progress to Date A recovery team has been established to coordinate recovery actions for the Rocky Mountain Tailed Frog and develop a recovery strategy. Summary of Research/Monitoring Activities Surveys indicate that there are two geographically separated populations of Rocky Mountain Tailed Frog in B.C.- one in the Flathead river watershed and one in the Yahk river watershed. Intensive inventories have been conducted for both populations to define their range and their distribution within the range. Population monitoring protocols are being developed to monitor both populations and the condition of their habitat. Summary of Recovery Activities A small portion of Rocky Mountain Tailed Frog habitat in the Flathead watershed was significantly affected by wildfires in 2003. Access roads built for fire-fighting have been deactivated or stabilized in order to mimimize pollution of tailed frog streams with sediment. The effectiveness of these rehabilitation measures will be ongoing through 2005 and possibly beyond, and the recovery team may recommend further rehabilitation measures. Currently, the recovery team is developing a watershed level riparian habitat protection plan for both the Yakh and Flathead watersheds. Almost all of the frog’s habitat occurs on Crown land. Therefore, the recovery team aims to create Wildlife Habitat Areas to protect critical breeding and dispersal sites throughout these watersheds. Stream and stream-side habitat in Wildlife Habitat Areas will be protected by restricting livestock access, harvesting and mining activity.