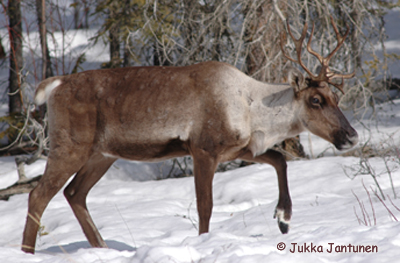 In winter, Woodland Caribou use mature and old-growth coniferous forests that contain large quantities of terrestrial and arboreal (tree-inhabiting) lichens. These forests are generally associated with marshes, bogs, lakes, and rivers. In summer, the caribou occasionally feed in young stands, after fire or logging. The average interval for habitats to return to their pre-fire state ranges from 40 to 80 years in the southern boreal forest in Alberta and Saskatchewan to 200 to 350 years in British Columbia. The Northern Mountain population of the Woodland Caribou winters in areas where the snow cover is relatively light. They are found at low elevations in mature Lodgepole Pine or spruce forests, where they feed primarily on terrestrial lichens and secondarily on arboreal (tree) lichens, or at high elevations on windswept slopes where terrestrial lichens are accessible.

Habitat destruction, hunting, disturbance by humans (including construction of roads and pipelines), and predation (by wolves, coyotes, and bears) have all contributed to the decline of Woodland Caribou. In many parts of Woodland Caribou range, forestry practices and the spread of agriculture and mining have resulted in the loss, alteration, and fragmentation of important caribou habitat. Factors beyond our control, such as weather and climate change, are also influential. One of the current challenges in caribou management is to learn more about how these factors interact and how to decrease their threat to Woodland Caribou populations.

Summary of Progress to Date The decline of the Northern Mountain Woodland Caribou population has continued despite conservation efforts. Some communities have implemented limited entry hunting regulations to reduce impacts upon the population. Non-resident hunting of caribou is managed through quotas. All hunted caribou require compulsory inspection and a declaration form that summarizes the hunters’ harvest. Summary of Research/Monitoring The British Columbia and Yukon governments, and the Teslin Tlingit Tribal Council are progressing with a three year study focusing on seasonal movement, distribution, and population ecology of the Swan Lake caribou herd. Summary of Recovery Activities The Tourism Action Society in the British Columbia Kootenays is supporting stewardship activities by delivering technical information on best recreational behaviours. The White River First Nations are contributing to the conservation effort by fencing adult cows and their calves in an enclosed area to reduce calf mortality from predation by wolves and bears. Studies evaluating the effects of using lithium chloride to repel caribou from roadways are underway to reduce the number of caribou road collision mortalities. In the Yukon, there are public education campaigns directed toward modifying behaviour of off-road vehicle users while participating in viewing activities. Signage along roadways has been erected in areas frequented by caribou to reduce mortalities of caribou. URLs Northwest Territories Wildlife Divisionhttp://www.nwtwildlife.com/Publications/speciesatriskweb/woodlandcaribou.htm