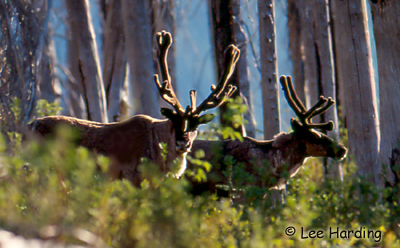 In winter, Woodland Caribou use mature and old-growth coniferous forests that contain large quantities of terrestrial and arboreal (tree-inhabiting) lichens. These forests are generally associated with marshes, bogs, lakes, and rivers. In summer, the caribou occasionally feed in young stands, after fire or logging. The average interval for habitats to return to their pre-fire state ranges from 40 to 80 years in the southern boreal forest in Alberta and Saskatchewan to 200 to 350 years in British Columbia. Both central metapopulations of Southern Mountain Woodland Caribou feed primarily on terrestrial (ground) lichens while individuals in the southern metapopulation consume arboreal (tree) lichens over a thick snow pack. In early winter, the arboreal-feeding caribou - sometimes called Mountain Caribou - use valley bottoms and lower slopes; they move to upper slopes and ridges after the snow pack deepens and hardens in mid- and late winter. They feed almost exclusively on arboreal lichens for six to eight months and descend in spring when the green vegetation emerges. The caribou that feed on terrestrial lichens tend to move to lower elevations as the snow pack increases.

Habitat destruction, hunting, disturbance by humans (including construction of roads and pipelines), and predation (by wolves, coyotes, and bears) have all contributed to the decline of Woodland Caribou. In many parts of Woodland Caribou range, forestry practices and the spread of agriculture and mining have resulted in the loss, alteration, and fragmentation of important caribou habitat. Factors beyond our control, such as weather and climate change, are also influential. One of the current challenges in caribou management is to learn more about how these factors interact and how to decrease their threat to Woodland Caribou populations. Woodland Caribou in the Southern Mountain population are particularly vulnerable because the subpopulations typically have low numbers, and they are becoming increasingly isolated as a result of habitat fragmentation. In the past unregulated hunting has had a serious impact on these caribou.

In 1984, caribou in the Selkirk Mountains of Idaho and Washington (known as the South Selkirks population), were listed as endangered under the United States Endangered Species Act.

Summary of Progress to Date Habitat issues for the Southern Mountain Population of Woodland Caribou continue to be addressed through land-use plans such as the Identified Wildlife Management Strategy of the Forest and Range Practices Act of British Columbia, and various Higher Level Plans (HLP’s) and Land Resource Management Plans (LRMP’s).  Recovery Implementation Plans have been developed by groups of stakeholders, First Nations, and biologists. The province of British Columbia has formed a Species at Risk Coordination Office (SaRCO), which is developing recovery options for the provincial government. Most local woodland caribou populations remain in decline; a few are currently stable or increasing. Two local populations have become extirpated. Summary of Research/Monitoring Activities Southern mountain Woodland Caribou are being monitored using radiotelemetry, Global Positioning System (GPS) technology, and ground tracking techniques.  The distribution of the caribou is being entered into a Geographical Information System (GIS) database to determine how caribou move within and among patches of old forest.  Forestry and habitat management studies have confirmed that the southern mountain Woodland Caribou select old-growth forests where their dominant winter food source (arboreal lichen) is most abundant.  These forests are also thought to allow caribou to spatially separate themselves to reduce predation. Radio and GPS collars change their signal pattern when stationary for several hours, usually indicating a deceased individual. These situations are quickly investigated to determine the cause of mortality. Often predators such as wolves and cougars are also radio-collared to aid in this research. Caribou-human interactions are being studied in several areas to determine how caribou react to human presence, in the form of helicopter or snowcat skiing, snowmobiling, or while on foot, skis, or snowshoes. To analyse the interaction, movement rates and location of GPS-collared caribou are compared before and after encounters with humans. In addition, stress hormones in caribou scat are analyzed as a measure of disturbance. Summary of Recovery Activities Revised guidelines have been developed for forest management, as well as back country recreation operators, working in mountain Woodland Caribou habitat.  In Alberta, government and industries have initiated planning to facilitate timber harvesting and other human development within caribou habitat with minimal disturbance.  The Operating Guidelines for Industry Activity in Caribou Ranges in West Central Alberta has been implemented since 2001. Existing caribou public outreach materials have been revised and the preparation of a new communication plan is underway.  Through the distribution of facts sheets, posters, brochures, and other forms of media, the public are being educated and encouraged to contribute toward Mountain Caribou conservation issues.  Cooperative recovery and management projects have been developed with stakeholders, including First Nations, conservation groups, and resource development industries. Individual caribou from healthy populations have been transplanted to those populations that are most endangered in order to reduce the chance of loosing these endangered populations.  This functions to increase population size and the genetic pool for the endangered population. Many areas of core caribou habitat have been closed to snowmobiling, and the helicopter / snowcat skiing industry has developed a set of best management practices.  These include the avoidance of skiing in areas where caribou have been sighted and the alteration of flight paths to avoid caribou locations. Wildlife mangers have increased the hunting allocation of deer, moose, and elk in, and adjacent to, caribou habitat to reduce the alternate prey that these ungulates provide to predators, which would otherwise support higher populations of predators. In some areas in or near caribou habitat, the permits for hunting wolves or cougars have been allocated or increased. URLs Parks Canada:  Jasper National Park’s Woodland Caribou: https://www.pc.gc.ca/en/pn-np/ab/jasper/nature/conservation/eep-sar/caribou-jasper Mountain caribou Project http://www.mountaincaribou.org/