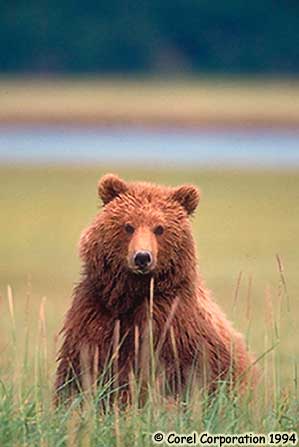 The Grizzly Bear is larger than the Black Bear, has a stout body, a large head, and a short tail. It has a distinctive hump between its shoulder blades that is formed by the muscles of its powerful forelegs. Its nose turns up at the end, unlike the Black Bear, whose nose arches down. Grizzly Bears are typically brown, but can range from nearly white through blond to black. The guard hairs on the shoulders and back are often tipped with white, which gives the fur a grizzled appearance from a distance. Size is quite variable in Grizzly Bears. The weight of individual females ranges from about 100 kg for those in interior populations to about 200 kg for those in coastal populations, and typically males are almost twice as heavy as females. Body mass also increases greatly between spring and fall and declines over the winter.

Ursus arctos has an extensive Holarctic distribution, and is known, or believed to occur in Canada, the United States, and at least 42 Eurasian countries. Many populations in Eurasia are isolated, small, and endangered. In Canada, the Grizzly Bear has been extirpated from the Prairies Provinces. With the exception of a few isolated groups in southern British Columbia, the Grizzly Bear continues to persist as one essentially continuous population across Alberta, British Columbia, the Yukon, the Northwest Territories, and Nunavut. There are estimated to be between 26 916 and 29 150 Grizzly Bears in Canada. These numbers were compiled in 2001/2002 and are based on figures obtained from the provincial and territorial jurisdictions. British Columbia has the largest population, with at least 14 000 bears. There are estimated to be 1000 Grizzly Bears in Alberta, 6000 to 7000 in the Yukon, and 5100 in the Northwest Territories. The population in Nunavut is unknown but is probably between 800 and 2000 bears. Overall, the population of Grizzly Bears in Canada is believed to have been generally stable since 1990.

Grizzly Bears are habitat generalists, and can be found from sea level to high-elevation alpine environments. In Canada, they occupy habitats as diverse as temperate coastal rain forests, semi-desert arctic tundra, boreal forests, and subalpine forests. Suitable grizzly habitat must provide an adequate food supply, appropriate denning sites, and isolation from human disturbance. The habitat associations of the Grizzly Bear are strongly seasonal; the consumption of a wide variety of plants is important for many Grizzly Bears so their movements often reflect the development of the local plant community. In mountainous areas vegetation emerges earlier at lower elevations; bears therefore descend from their denning sites to feed in the spring, and return later in the season to higher elevations.

In the cultures of many Aboriginal peoples, the Grizzly Bear remains one of the most powerful, popular, and revered icons, and few species typify Canadian wilderness in as many minds as the Grizzly Bear. Grizzly Bears spend up to seven months of the year inside their dens in hibernation. They are large animals, and must build sizeable fat reserves to survive the winter. Bears in poorer quality habitat will range more widely in search of adequate food. Coastal Grizzly Bears, however, are some of the largest bears with the smallest home ranges, and are able to consume more than 10 kg of salmon per day in the fall. The Grizzly Bear has the anatomy and digestive system of a typical meat eater — and it can be a very effective predator of elk, moose, deer, and caribou. More often, however, plants make up 80 to 90% of its diet. In spring, it frequents areas where the vegetation emerges the earliest, and can often be seen digging for roots of the legume Hedysarum. Over much of its range, berries are the most important item in the Grizzly Bear’s diet, and contribute significantly to the winter’s fat reserves. Grizzly Bears are quite opportunistic, and will also feed on insects, small mammals, carrion (dead animals), and garbage. The effects of Grizzly Bears on their environment are wide and varied. They disperse the seeds of berries and plants that they feed on, and scavengers benefit from incompletely consumed salmon where Grizzly Bears feed. Nitrogen, derived from feeding on salmon, is redistributed on land through the urine and feces of the bears. Wolves and Grizzly Bears compete with each other for live prey and carcasses, and will steal food from each other. Grizzly Bears live an average of 20 years, although individuals as old as 34 have been recorded. Female bears have their first young when they are five to seven years old, and typically have litters of one to three cubs. The young are born during January or February inside the overwintering den. At birth, the cubs are less than 22 cm long and weigh about 400 g. They gain weight rapidly and weigh about 8 kg when they emerge in the spring. The cubs learn many complex behaviours from their mothers, and stay with them for two to four years. As a result, female bears are only able to reproduce every three or four years. Grizzly Bears are also difficult to monitor precisely, and assessing the viability of a population is difficult.

There is some natural mortality in Grizzly Bear populations, but most individuals die as a result of human activities. Populations in most areas in Canada are hunted, and licensed hunters kill over 450 Grizzly Bears each year. An additional 100 are documented as killed by other human causes, and substantial numbers are killed and not reported. Activities undertaken by humans within Grizzly Bear habitat — including mining, forestry, agriculture, residential development, and recreation, degrade the quality of the habitat for bears, and increase their risk of dying. The development of roads, railroads, power lines, and other linear features within Grizzly Bear habitat is a particular threat. Roads themselves pose little harm, but their use by humans, and the avoidance of a buffer zone around the roads, makes large amounts of habitat much less available to the bears. In addition, roads provide access for humans with firearms who, legally or illegally, kill bears that would otherwise be less vulnerable. Human activities have also resulted in the geographic or genetic isolation of several populations of Grizzly Bears — including eight that have been identified in southern British Columbia. Each is small, with fewer than 100 bears, and the rescue potential from neighbouring populations is low to non-existent.

The Grizzly Bear in Canada is on Appendix II of the Convention on the International Trade in Endangered Species (CITES), and is listed by the World Conservation Union (IUCN).