This salamander has a restricted range within populated and highly modified areas. Over the past three generations, the species has disappeared from many historic locations and the remaining locations are threatened by development, loss of habitat and, potentially, the presence of sperm-stealing unisexual populations of salamanders.
COSEWIC History of Status Designation: Designated Threatened in November 2000. Status re-examined and designated Endangered in November 2010.
SARA Status: Schedule 1, Endangered
Date of Listing (yyyy-mm-dd): 2003-06-05 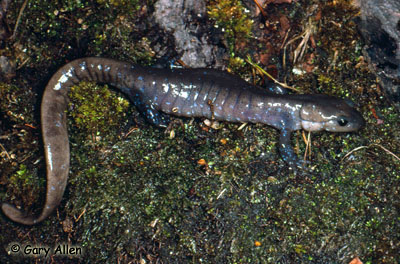 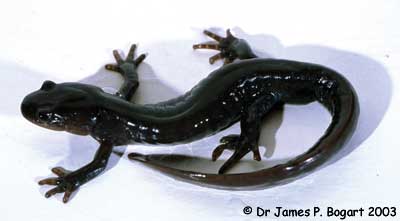 Ambystoma jeffersonianum, Jefferson Salamander, is a long, slender, dark grey to brownish member of the mole salamander family with elongated limbs and toes. Light bluish-grey flecks may occur along the lower sides of the body and tail. Adults range in size from 60 to 104 mm snout-vent length with a tail that is nearly as long as the body and is laterally compressed. Males, in breeding condition, have a distinctly swollen cloacal region. Unisexual (all-female) Ambystoma, which co-exist with Jefferson Salamandersin all known Canadian populations, have a very similar morphology to female Jefferson Salamanders. (Updated 2017/06/12)

The geographic range of Jefferson Salamander roughly coincides with upland deciduous forest in northeastern North America from New England to Indiana and south to Kentucky and Virginia. In Canada, the species is found only in isolated populations that are mostly associated with the Niagara Escarpment and Carolinian forest regions in Ontario. (Updated 2017/06/12)

Adult Jefferson Salamanders, throughout their range, are found within deciduous or mixed upland forests containing, or adjacent to, suitable breeding ponds. Breeding ponds are normally ephemeral, or vernal, woodland pools that dry in late summer. Terrestrial habitat is in mature woodlands that have small mammal burrows or rock fissures that enable adults to over-winter underground below the frost line. (Updated 2017/06/12)

Adults migrate to and from breeding ponds at night very early in spring when temperatures are moderate. Most migration events to or from breeding ponds coincide with rain. Courtship and egg deposition may occur under the ice of vernal pools and individual males court several females. Within a day or two after mating, females deposit several egg masses on sticks or emergent vegetation. Duration of egg and larval development is variable and temperature-dependent. Carnivorous larvae normally transform in July or early August and leave the pond. Adults spend most of their time under rocks, logs, or in mammal burrows in the forest. Adults over-winter in the terrestrial environment below the frost line. Unisexual Ambystoma, which are mostly polyploid, occur in all known Jefferson Salamander populations in Ontario. They are much more numerous than Jefferson Salamanders and, apparently, have the same behaviour as female Jefferson Salamanders. These females court male Jefferson Salamanders and use sperm from the males to initiate development of their eggs. The sperm may or may not be incorporated into the egg. (Updated 2017/06/12)

In Ontario, the Jefferson Salamander is limited by availability of suitable habitat that would include deciduous or mixed forested upland areas associated with fishless ponds that are most often temporary or vernal pools. Threats include the partial or absolute elimination of suitable habitat, construction of barriers (e.g., roads) across migratory routes to or from breeding ponds, stocking fish in breeding ponds, or reduction of the hydro period of breeding ponds so larvae do not have time to complete their development. (Updated 2017/06/12)