This species is the only native oyster along the Pacific coast of Canada. Although its population suffered large-scale historical declines associated with overharvest, it appears to have been stable in recent decades. However, recent introductions of exotic parasites, predatory snails, green crabs and fouling ascidians, as well as industrial and domestic pollution, pose significant threats to the oyster. Limited dispersal and vulnerability to low temperature extremes and sedimentation from floods and landslides may increase its vulnerability and ability to recover from adverse impacts.
COSEWIC History of Status Designation: Designated Special Concern in November 2000 and in May 2011.
SARA Status: Schedule 1, Special Concern
Date of Listing (yyyy-mm-dd): 2003-06-05 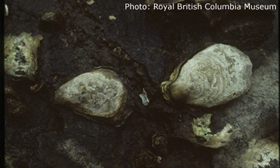 The Olympia oyster is a small oyster species, whose maximum size is about 90 millimeters in diameter, and whose shape is roughly elliptical or circular. The valves of this oyster are different. Its lower (left) valve is deeply cupped and upper (right) valve is flat and fits inside the edges of its lower valve. The outside of the oyster ranges from white to purplish-black in colour and the insides of the valves range from white to iridescent green to purple in colour. Olympia oysters are often attached by the lower valve to hard substrate but can occur, either singly or in clusters, free on the substrate.

The Olympia oyster is found only on the west coast of North America, between Sitka, Alaska and Panama. In Canada, it occurs in the Georgia Strait, the west coast of Vancouver Island, and from a few locations in the Queen Charlotte Strait and the coastal mainland of Queen Charlotte Sound. The Olympia oyster is British Columbia’s only native oyster. Population size and trend estimates are not available for the Olympia oyster. Anecdotal evidence indicates that the species’ population levels are low in Georgia Strait relative to historic levels. Major declines in the population are believed to have taken place during a period of fisheries exploitation between the 1800’s and 1930. Small populations still exist in Georgia Strait and larger populations are locally common off of Vancouver Island. It is assumed that Olympia oyster populations are currently stable at low levels.

Olympia oysters are mainly found in the lower intertidal and shallow subtidal zones of saltwater lagoons and estuaries. They have also been found on tidal flats, tidal channels, bays and sounds, in splash pools, near freshwater seepage, or attached to pilings or the undersides of floats. On the outer coast, this oyster species is only found in protected locations. Within suitable habitat, Olympia oysters need hard substrate for settlement.

Olympia oysters are sedentary and filter feed on a variety of plankton, including organisms such as diatoms and dinoflagellates. Outside of feeding, reproduction, and selection of settlement site, this species displays little specific behaviour. Reproduction in the Olympia oyster reproduction is closely tied to temperature. Oysters mature when the temperatures go up in the spring and spawn in the summer. Reproduction commonly occurs at ambient temperatures of 14-16?C. In Canada, Olympia oysters mature as males at about the age of one. They then alternate sexes between male and female for the rest of their lives (maximum life span is believed to be greater than ten years). Sperm is collected in the respiratory current and used to fertilize the 250 000 to 300 000 eggs produced by the female Olympia oyster. Fertilized eggs remain in the female mantle cavity for 14-17 days, after which the larvae are released into the water column. Here they drift and disperse for two to three weeks, and settle on hard substrate once the larvae have grown and developed.

In Canada, the Olympia oyster is at the effective northern limit of its range. It is vulnerable to environmental extremes, and cold winter temperatures are likely a contributing limiting factor. Disease could also be a limiting factor as it is thought to have played a role in the collapse of Olympia oyster stocks in the United States. There is evidence of pollution having a negative impact on the species elsewhere but this factor has not been studied in Canada. The primary cause of historic declines of this species has been overfishing. The role of human alteration of the species’ habitat on the Olympia oyster, especially in sensitive estuarine habitats, has not been investigated. Olympia oysters are also prey for crabs, snails, sea stars and birds.