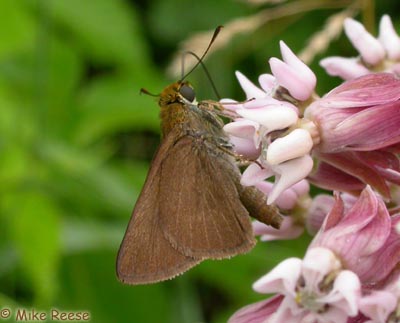 The Dun Skipper (Euphyes vestris vestris) is a small skipper (wingspan 23 – 32 mm)with uniform chocolate-brown wings with a purplish hue and tan fringes on theouter margins. Adults sit with their hindwings laid flat and their forewingsheld upright. The head and thorax of adults (both sexes) are yellowish-orange.Eggs are pale green, crescent-shaped, globular and smooth when first laid, butprior to hatching change to a reddish colour on top. Larvae have a shiny, palegreen body with many fine, wavy, silvery lines. Pupae are various shades ofyellow, brown and light green, with a blunt, ridged edge at one end. There aretwo subspecies of the Dun Skipper in Canada (E. v. vestris and E. v. metacomet).This status report addresses E. v. vestris,the western ranging subspecies. (Updated 2017/05/25)

Globally,the Dun Skipper ranges from southwestern British Columbiasouth through the western portions of Washington State,Oregon and northern California. The Canadian range is restrictedto the lowlands of the lower Fraser and LillooetRivers (mainland B.C.), the southern Gulf Islands,and southeastern Vancouver Island. On themainland, the species ranges from Lillooet south and west through Boston Bar,Pemberton, Yale and Hope. In the Lower Mainland, it ranges as far north as Powell Riveron the Sunshine Coast. On Vancouver Island, it rangesfrom the Victoria area north to Courtenay andComox; on the Gulf Islands its distribution includes Salt Spring, Denmanand Hornby Islands. There are 209 records datingfrom 1902-2011. (Updated 2017/05/25)

Matingand oviposition coincide with the flight season from late May through earlyAugust. Males perch approximately one metre from the ground and wait forreceptive females. Females lay eggs singly on the host plant and the eggs hatchafter approximately one week. Larvae begin feeding and eventually form tubularsilk shelters (one larva per shelter), formed from two to four tied and rolledhost plant leaves. Throughout winter months, larvae diapause within thesetubular silken rolls, emerging the following spring. Pupation occurs withinsilken tubes, likely at the base of the host plants in spring. (Updated 2017/05/25)

Threats to the DunSkipper include: 1) habitat loss, degradation and fragmentation from landconversion and infilling of the open wet habitat and plant communities thatoccur throughout the Lower Mainland and southeastern Vancouver Island; 2) natural forest succession; 3) pesticide application to control EuropeanGypsy Moth; and 4) climatechange, primarily through increases in summer drought, potentiallyresulting in desynchronized larval and host plant phenology. Alternatively,climate change may increase precipitation although spring flooding may bedetrimental to larval and pupal survival. Based on the threatof habitat fragmentation and private land development (based on landownership), there are approximately 51 locations (landowners) for the Dun Skipper(extant and extirpated). When only extant locations are considered (recordsfrom 2001 or later and surrounding habitat with little change), the number oflocations is reduced to 28 (landowners). Of the 28 locations, at least threeare threatened by land development within the next three years, and at least 14are within artificially created habitats (e.g., roadside pull-outs, pipelinecrossings, and recent clear-cuts) that are rapidly changing as a result ofnatural vegetative succession and are not expected to be present in 10 years.There is an inferred reduction in the number of matureindividuals from ongoing habitat loss and fragmentation; probably > 30%,based on cumulative threats from development projects in the lower mainland(e.g., industrial park at one site) and vegetative succession (based onnon-native and native plant growth) at sites on Vancouver Island and the mainland. (Updated 2017/05/25)