The historic range of this small, eye-catching butterfly in Canada was wider and included south-eastern Vancouver Island. Now it only occurs in a very small area on Denman Island, BC.  The habitat it occupies is likely to continue to decline in area and quality. Threats include habitat loss and degradation due to development, natural forest succession and the spraying of bacterial insecticide to control pest insects. Individual ownership issues exacerbate the combination of these and other threats.
COSEWIC History of Status Designation: Designated Endangered in November 2000 and in May 2011.
SARA Status: Schedule 1, Endangered
Date of Listing (yyyy-mm-dd): 2003-06-05 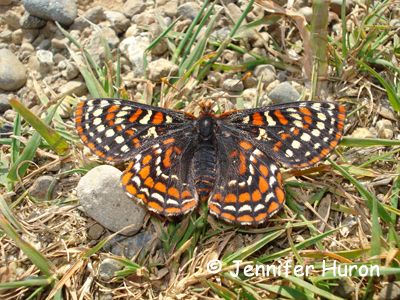 The Taylor's Checkerspot is a subspecies of a butterfly commonly called Edith’s checkerspot. It is a medium sized butterfly with alternating black and orange bands on the upper wing surfaces. The underside of the wing has a pattern of orange, red, pale cream and black-checkered bands outlined with black. The black-checkered bands parallel the thorax (black) and abdomen. The tips of the front wings are rounded. The male Taylor’s Checkerspots are slightly larger than the females. Eggs are pale yellow and transparent and the caterpillars are black with orange bands.

The Taylor's Checkerspot was historically found in southeastern Vancouver Island, the Puget Trough in Washington from Tenino north through the San Juan Islands, and the Willamette Valley in Oregon. In Canada, historic records from 1887 to 1995 indicate there were 22 naturally fragmented populations in British Columbia: fifteen sites in the greater Victoria area, three sites from Mill Bay to Duncan, three sites on Hornby Island and one near Courtenay. Surveys in 2001 to 2003 indicated that the species was likely extirpated, but in 2005, 15 individuals were discovered on Denman Island, British Columbia.

The Taylor's Checkerspot needs open grassland with sparse vegetation and conditions that are suitable for the plant species that provide food for larvae and nectar for the adults. Often these sites are associated with the Garry Oak ecosystems, although native ecosystem habitats are not necessarily required. Areas cleared by human activities have supported thriving populations.

Compared to most butterflies, the Taylor's Checkerspot has been well studied, though most of the work has focused on other subspecies. This butterfly feeds on plants of the genus Plantago and on figworts, both of which are members of the same plant family. Plantago and figworts both have chemicals called iridoid glycosides which stimulate oviposition at least for a related butterfly species. In Canada, three species of Plantago occur in habitat that is suitable for the Taylor's Checkerspot, and at least two of these plant species are probably used by the butterfly. Taylor's Checkerspot butterflies usually disperse only about 200 to 300 feet from where they are first sighted, though they can disperse more widely if conditions are too dry or the density of individuals in a given location is too high.The number of eggs produced by this butterfly appears to be greatly affected by the availability of nectar sources, and the species has to produce a large number of larvae to survive. Nectar sources for this species in Canada include a plant called Spring Gold (Lamatium utriculatum) and Wild Strawberry (Fragaria spp.).

Garry Oak meadow ecosystems and adjacent open grasslands provide larval food and nectar requirements of the Taylor's Checkerspot in Canada. Invasion of these plant communities by introduced plants such as Scotch Broom (Cytisus scoparius), along with fire suppression and habitat destruction from urbanization are the main threats to the butterfly’s survival.