Scientific Name: Satyrium behrii
Other/Previous Names: Behr's (Columbia) Hairstreak ,Satyrium behrii columbia
Taxonomy Group: Arthropods
COSEWIC Range: British Columbia
COSEWIC Assessment Date and Status Change: May 2012
COSEWIC Status: Endangered
COSEWIC Status Criteria: B1ab(i,ii,iii,iv,v)+2ab(i,ii,iii,iv,v)
COSEWIC Reason for Designation: This small butterfly is restricted to antelope-brush habitat in British Columbia, a habitat that has decreased considerably in extent in the past century and remains under threat due to land use change (conversion to viticulture, residential and commercial development) and the impact of fire. It rarely disperses much more than 120 m and persists in small, isolated fragments of habitat, which continue to decline in area and quality. Large annual fluctuations in population size, as documented for the largest Canadian population, increase the species’ vulnerability and call into question its long term viability.
COSEWIC History of Status Designation: Designated Threatened in November 2000. Status re-examined and designated Endangered in May 2012.
SARA Status: Schedule 1, Endangered
Date of Listing (yyyy-mm-dd): 2003-06-05 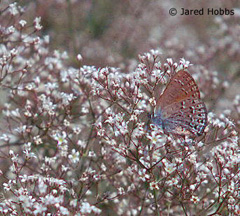 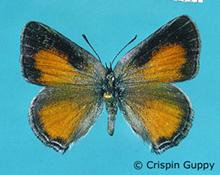 Behr’s Hairstreak (Satyrium behrii) is a small butterfly (wingspan 2.5 – 2.9 cm) in the family Lycaenidae. The dorsal forewing and hindwing surfaces have wide black margins that surround a rich, yellowish-orange-brown patch. There is one subspecies of Behr’s Hairstreak in Canada. The larval host plant of Behr’s Hairstreak is Antelope-brush, which has special significance in Canada as a symbol used by conservation organizations for the protection of associated plant communities and grasslands within the Okanagan region. First Nations peoples within the region hold butterflies (in general) and the Antelope-brush plant significant in their cultures. Antelope-brush is also significant to the wild game management and livestock grazing industry sectors. (Updated 2017/06/02)

The Canadian range of Behr’s Hairstreak is restricted to south-central British Columbia from Penticton in the north to Osoyoos in the south. The butterfly inhabits the low elevation (280 – 760 m above sea level) Antelope-brush plant communities on both the east and west side of the south Okanagan Valley. The species occupies an area of less than 12 km². (Updated 2017/06/02)

Behr’s Hairstreak has one generation per year; the flight period is from mid-May through late July and peaks in mid-June. Eggs are laid singly on the leaves and branches of Antelope-brush where they overwinter. The eggs hatch in early spring, and the larvae develop from late March to late May and pupate in late spring. The pupae are attached to stems of Antelope-brush and this stage lasts approximately two weeks. Behr’s Hairstreak is not known to migrate. Adults appear to have limited dispersal capabilities and remain within close proximity to Antelope-brush habitat. Average dispersal distances for the butterfly, based on field studies completed in the south Okanagan Valley, are 80 – 120 m depending on spring weather, with a maximum-recorded dispersal of 1.2 km. (Updated 2017/06/02)

Behr’s Hairstreak faces many threats, most of them associated with habitat conversion and associated fragmentation. The main limiting factor for Behr’s Hairstreak is the availability of high quality and older age-class Antelope-brush host plants. Adult butterflies are also limited by nectar plant availability due to short proboscis (tongue) length, which cannot reach the nectar in flowers of plant species that have a deep corolla. (Updated 2017/06/02)