Scientific Name: Plebejus saepiolus insulanus
Taxonomy Group: Arthropods
COSEWIC Range: British Columbia
COSEWIC Assessment Date and Status Change: May 2012
COSEWIC Status: Endangered
COSEWIC Status Criteria: B1ab(iii)+2ab(iii)
COSEWIC Reason for Designation: This species has not been documented in the field since 1979. However, search effort is insufficient to conclude that the species is extinct. Any remaining populations in its historical range must occur within a very small distributional range and are likely in decline due to declining habitat quality from invasive plants.
COSEWIC History of Status Designation: Designated Endangered in November 2000. Status re-examined and confirmed in May 2012.
SARA Status: Schedule 1, Endangered
Date of Listing (yyyy-mm-dd): 2003-06-05 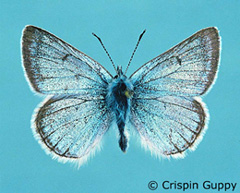 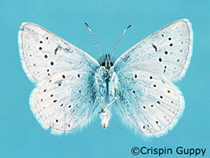 The Island Blue has a wingspan of 21 to 28 millimeters. The upperside of the male is pale metallic blue and has narrow black borders. A row of dark spots is located close to the margin of the male’s hindwing. The female’s upperside is dark brown with a bluish sheen, and there is a row of faint orange-capped black spots on the hindwing margin. Both sexes have a black spot at the end of their forewing. The male’s underside is a silvery-grey colour that is more bluish close to the base of the wings, and females are darker grey to pale tan underneath. In addition, there are two rows of small black spots on both wings and portion of a third row on the hindwing below. Orange shading occurs between the second and third rows of spots and one spot on the third row is distinctly larger and is known as the "thecla" spot. Island Blue larvae have two colour forms, one is green and the other is reddish brown.

This subspecies of Island Blue was found only on British Columbia’s Vancouver Island and nowhere else in the world. Museum records indicate that it inhabited the east side of Vancouver Island, from Saratoga Beach south of Campbell River, south to Victoria. The same subspecies name has been recently used for populations found in coastal Oregon but it is thought that this use of the name is a taxonomic error. The Island Blue has not been recorded since 1979. Few data are available for years prior to this sighting, making population size and trends impossible to estimate.

There is no information on the specific requirements of the Island Blue subspecies on Vancouver Island. In other areas, the species relies on open areas that have enough moisture to support clover (required for larval food) and that are probably disturbed (e.g. old roads or campgrounds).

Very little is known about the Island Blue and even less information is available for the subspecies that occurred on Vancouver Island. It is known that the larvae require clover for food. Museum data indicate that the species flies from early May to mid August. Any records later in the year appear to be for females flying alone and for populations at higher elevations. Lastly, data indicate that this species produces one generation per year.

Island Blue larvae require clover for food. Other subspecies of the butterfly that occur in Canada and the United States appear to have no other limiting factors. In areas outside of Vancouver Island, the species uses introduced (or non-native) clovers. The reason that this particular subspecies of Island Blue is not found on the clover that has invaded open areas of Vancouver Island is not yet known. It could be that the subspecies was near extinction before introduced species spread into its suitable habitat. It is thought that urbanization, invasive introduced plants and/or control of forest fires may have eliminated the hostplant for Island Blue larvae on Vancouver Island.