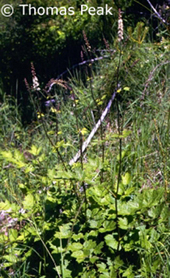 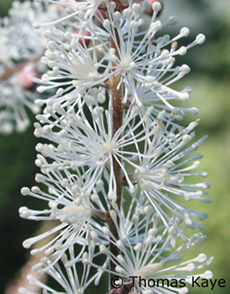 The Tall Bugbane is a perennial, large-leafed, understorey plant that stands 1 to 2 m tall. It has a dark, tuberous, horizontal rhizome. The inflorescence is simple to compound with 50 to 900 small, white, closely-crowded flowers. Each follicle (fruit) contains approximately 10 red to purple-brown seeds.

The species occurs from southwestern Oregon and western Washington north to southwestern British Columbia, where it is only found sporadically in the Chilliwack River valley. It occurs west of the Coast-Cascade Mountains in BC and Washington, but within the mountain range in southwestern Oregon.In Canada, there are 7 extant, recently verified populations of Tall Bugbane, as well as 1 historic and 2 unverified populations, all of them in the Chilliwack River valley. Populations are relatively small, ranging from one to 63 plants.

There is no information available on the biology of Tall Bugbanes in BC, however, studies related to pollination ecology, and population genetic structure have been conducted in Washington and Oregon. Percentage germination is low, and seeds are heavy with no special dispersal mechanism. Plants emerge in spring and flower in mid-to-late June, July, or even into August. The species is pollinated by insects, mostly solitary bees, even though it seems poorly adapted to this type of pollination because its flowers lack nectar and showy corollas (petals) or markings to attract pollinators. However, individual flowers bloom in sequence, which is a characteristic facilitating cross-pollination.

The Tall Bugbane has both intrinsic biological limitations, and an uncertain future under current logging regimes in the Pacific Northwest. The plant occurs in small populations which are sporadically distributed over the landscape, is much less attractive to pollinators than other flowering plants, and lacks any specialized seed dispersal mechanism. Extremely small populations exist which are susceptible to low genetic diversity and imminent extirpation. In addition, the species, which is notably absent from young 15-30 year old managed stands, is threatened by forest fragmentation.

Summary of Progress to Date A Recovery Team was initiated for this species in 2002. A draft Recovery Strategy has been produced, which recommends fieldwork to identify any additional populations, coordination of conservation planning with forest licensees to ensure maximal protection to known populations, and further research to increase our understanding of the pollination and dispersal ecology of the species. Summary of Research/Monitoring Activities In 2005, a monitoring and research project was initiated for Tall bugbane. One objective is to determine which life history stages of this long-lived plant are most vulnerable and should be the focus of conservation efforts. Researchers also aim to identify the bee species that pollinate Tall bugbane and determine whether the pollinators’ habitat requirements need to be addressed in recovery planning. Finally, an assessment of the genetic structure of Tall bugbane populations in Canada will determine the relationship between plants in different Canadian populations as well as Tall bugbane in the United States. This information will be used if population augmentation is undertaken, because a population should be augmented by seeds from a closely related population. Summary of Recovery Activities The recovery team aims to have all six known populations designated as wildlife habitat areas. Wildlife habitat areas will protect the land within 50 m of the population (the core area), and a 200 m buffer zone will have limited harvest. The total area of these six wildlife habitat areas will be 200 ha.