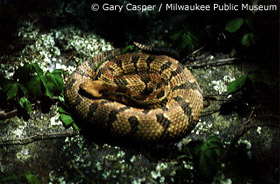 The Timber Rattlesnake is a large, venomous snake. It is yellow, brown or black, with dark brown or black V-shaped crossbands on the back. The head is somewhat triangular, and eyes have vertically elliptical pupils.

Historically, the species was found throughout the eastern United States and in Ontario. It is no longer present in Maine and Rhode Island, and has not been seen in Canada since 1941, when a specimen was collected from the Niagara Gorge. It has not been found anywhere else in Canada since then, and is therefore considered extirpated from Canada.

The preferred habitats for Timber Rattlesnakes in the northern parts of their range are forested areas with rocky outcrops for denning and basking. Granitic escarpments and ledges with accumulations of talus (rock debris) are common characteristics of the communal den within which the snakes hibernate.

The diet of the Timber Rattlesnake is comprised almost exclusively of small mammals. Gravid (pregnant) females do not feed, and select different habitat features than those preferred by males and non-gravid females, in particular choosing warmer sites. On average, females reproduce every three years, usually giving birth to five to nine young. Preferred body temperature is about 27?C during the active season, falling to a minimum of 4.3?C during hibernation.

Intrinsic characteristics of the species, such as delayed maturity, low reproductive output, and low juvenile survivorship, combined with the effects of human exploitation through bounty hunting, commercial collecting and sport hunting, have led to the species’ extirpation from Canada. Habitat destruction and scattered distribution of suitable hibernacula were other limiting factors. The colonial nature of the species made it particularly vulnerable to human persecution, which has had devastating consequences on populations of the Timber Rattlesnake.

Summary of Progress to Date A draft recovery strategy has been created for the Timber Rattlesnake. Information was compiled concerning the possible causes of the species extirpation from Canada. Former range extent and population areas were described using verified historical information. A review of the available scientific literature was conducted which included other known population sizes and their viability, spatial and activity patterns, specific habitat needs, including hibernation and gestation features, and foraging needs. A comparative description of historic and potentially suitable sites also was assessed. Knowledge gaps for this species have been identified. Summary of Recovery Activities Museum and library searches for specimens and information have been conducted. There have been meetings with rattlesnake experts in Canada and the United States. Also, zoos were checked for a source of genetic material.URLs Ontario’s Biodiversity: Species at Riskhttp://www.rom.on.ca/ontario/risk.php?doc_type=fact&lang=&id=102 Natural Resources Canada: Amphibians and Reptiles of Ontariowww.cfs.nrcan.gc.ca/subsite/glfc-amphibians/crotalus-horridus Canadian Biodiversity: Species:http://canadianbiodiversity.mcgill.ca/english/species/herps/herppages/Cro_hor.htm