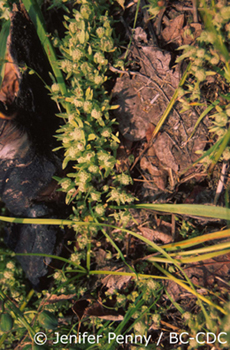 Tall Woolly-heads is an erect woolly annual, 1-15 cm tall. Its branched stems are woolly-hairy with opposite, moderately silky-hairy, entire leaves. One or several spherical flower heads are clustered in the forks of stems or at their tips and are up to 6 mm tall. The cylindrical, glabrous (hairless) fruits are 1.0-1.7 mm long.

The species occurs in southwestern British Columbia, southeastern Alberta and southwestern Saskatchewan in Canada, and ranges south through Idaho, Washington and Oregon to northern California. The Pacific population is restricted to southern Vancouver Island in British Columbia.The species still occurs at six of the eleven known sites in BC. Four of these sites have been confirmed since 1993.

The species inhabits dried beds of vernal (spring) pools and other open, moist, often disturbed sites in the coastal Douglas fir zone at elevations below 1000 m. The climate of the this zone consists of mild wet winters and warm dry summers. Tall Woolly-heads typically occupies open, exposed sites that are usually seasonally flooded after a rapid snow melt. The locations are often level, although generally slightly depressed. The species is not found within particular communities and often occupies sites where other species are sparse. There does not appear to be any specific association with other plants.

Little information exists regarding the biology of the species. Lack of structures attractive to insects and animals, and an interpretation of the floral structure, indicates that the species may self-pollinate. However, pollen may not be essential for seed production, and asexual reproduction may also occur.

Habitat destruction is the greatest threat to existing populations of Tall Woolly-heads. In BC, sites where the species occurs are either subjected to heavy pedestrian trampling or are at risk from development. One Tall Woolly-heads site is located in Uplands Municipal Park, but the status of the population in Francis-King Regional Park is unknown. Maintenance of footpaths and mountain-biking in both parks have been destroying surrounding vegetation. The population at Somenos Lake would likely be eliminated if the water level were lowered for agricultural purposes. Threats to the continued survival of Tall Woolly-heads are compounded by the lack of biological and ecological information, which makes it difficult to manage sites for the species.