Scientific Name: Charadrius melodus circumcinctus
Taxonomy Group: Birds
COSEWIC Range: Alberta, Saskatchewan, Manitoba, Ontario
COSEWIC Assessment Date and Status Change: November 2013
COSEWIC Status: Endangered
COSEWIC Status Criteria: C2a(ii)
COSEWIC Reason for Designation: The interior subspecies of this shorebird is projected to decline over the longer term, particularly if concerted conservation efforts are relaxed. Overall numbers remain low and adult survival has been poor over the last decade. Threats from predation, human disturbance, and declines in habitat extent and quality continue.
COSEWIC History of Status Designation: The species was considered a single unit and designated Threatened in April 1978. Status re-examined and designated Endangered in April 1985. In May 2001, the species was re-examined and split into two groups according to subspecies. The circumcinctus subspecies was designated Endangered in May 2001.Status re-examined and confirmed in November 2013.
SARA Status: Schedule 1, Endangered
Date of Listing (yyyy-mm-dd): 2003-06-05 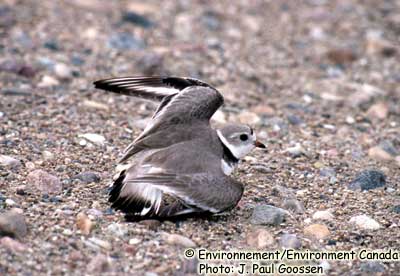 The Piping Plover is a small, thrush-sized shorebird that blends well into its setting. It is primarily the colour of dry sand, but has distinctive black markings (a black collar or breastband, a black band above the white forehead, and a partially black tail); a white rump; and bright orange legs. The short and stout bill is orange with a black tip, and becomes black in winter.

The circumcinctus subspecies of the Piping Plover is a North American bird that breeds on the American shores of the Great Lakes (Michigan) and throughout the Great Plains from the southern Canadian prairies to Nebraska. It winters along the Atlantic coast, from South Carolina to Florida, and along the coast of the Gulf of Mexico. In Canada, the circumcinctus subspecies breeds in central Alberta, southern Saskatchewan, southern Manitoba, and used to breed in southern Ontario. The numbers of Piping Plovers have been decreasing everywhere. However, the most dramatic declines have occurred in the Great Lakes region. The last known nesting of Piping Plovers on the Canadian Great Lakes occurred at Long Point in 1977. The prairie region had an estimated 1687 adults in 1996. About 25% of the Canadian prairie population occurs in the Quill Lakes area of Saskatchewan, where more than 430 Piping Plovers were observed in 1996.

Piping Plovers arrive on their breeding grounds in Canada in late April or May. Males establish a territory and attract a mate with dramatic aerial and ground displays. They scrape a shallow nest-site in sand or gravel, which the female then inspects. Clutches usually contain 4 eggs. Both parents participate in the incubation of eggs and care of nestlings, though the young are able to find their own food within hours of hatching. Females can begin to breed at one year of age and will renest once or twice in a season if the eggs are destroyed, but raise only one brood per year.

The most important limiting factor for the Piping Plover circumcinctus subspecies is loss of habitat due to human use of beaches, and the consequent disturbance of nesting sites. Dogs and cats prey on the eggs and young, as do gulls and raccoons initially attracted to the nesting areas by picnickers’ garbage. On the Prairies, cattle and horses are known to trample nests, and chicks can be trapped in their deep hoofprints. Changes in water levels due to recreational or building activities, dams, and seasonal storms also threaten the nesting sites of this subspecies.

The Piping Plover circumcinctus subspecies is protected by the federal Migratory Birds Convention Act. Under this Act, it is prohibited to kill, harm, or collect adults, young, and eggs. It is protected under the Canada National Parks Act where it is found in Point Pelee National Park. The subspecies is also protected under the Endangered Species Acts of Manitoba and Ontario and the Saskatchewan and Alberta Wildlife Acts. The Quill Lakes area of Saskatchewan is internationally recognized as a significant Important Bird Area (IBA). Conservation plans for IBAs in Canada are developed in partnership with landowners, naturalists, hunters, government agencies and municipalities, Aboriginal groups, scientists, and others.