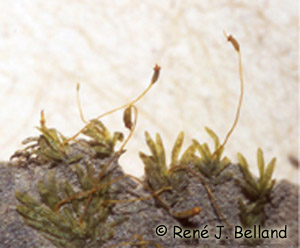 The species is a western North American endemic (only found in western North America). The main portion of its range is in California and southwestern Oregon. There are also isolated occurrences in northwestern Washington and southwestern British Columbia. There are less than 20 known locations globally. In Canada, there is only one known population, which is located in North Vancouver, in southwestern British Columbia. It consists of one patch covering approximately 625 cm². There is no information on population trends.

The single Canadian population occurs in a Douglas-fir/Western Hemlock forest . The species grows on a wet silty outcrop in a streamlet. In the major part of its range, the species is associated with coastal Redwood forests.

There is little known about the biology of the Poor Pocket Moss. The species is monoicous (male and female reproductive structures on same plant), and the Canadian population produces spores regularly. Thus the species can potentially disperse into nearby suitable habitats.

The single population of Poor Pocket Moss is vulnerable to chance events and climate change due to its extremely limited distribution. A series of two or three hot, dry summers could completely dry out the substrate on which the species depends.

The single Canadian population occurs within a city park managed as a public nature park by the City of North Vancouver.

Summary of Progress to Date The draft recovery strategy has been completed and only one population of the Poor Pocket Moss is known to exist in Canada. Summary of Research/Monitoring Activities This site was visited five times since 2003, once in 2004, and three times in 2005. Two patches of the moss were observed in 2003, none were observed in early 2005 following a severe rain event, and six patches were observed during a survey in July, 2005. These latter six patches ranged in size from about 1-2 cm2 (three patches) to 6 cm2 (two patches), to about 40 cm2 (one patch at the original location).