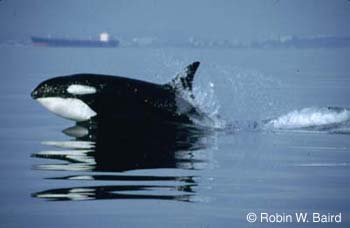 The Killer Whale (Orcinus orca) is the largest member of the dolphin family. Its size, distinctive black and white markings, and tall dorsal fin characterize the species. Adult males may reach overall lengths of eight to nine metres, and weigh up to five tonnes; females are smaller, measuring at maximum about seven metres and four tonnes. The first sight of a Killer Whale is usually the iconic triangular dorsal fin, up to 1.8 metres in height for males, and less than one metre for females and juveniles. Three distinct groups, or ecotypes, of Killer Whale inhabit Canadian Pacific waters, each exhibiting different prey preferences, dialects and social organization. These ecotypes –Bigg’s (Transient), Offshore, and Resident – are believed to be socially and genetically isolated, despite sharing the same waters. Resident Killer Whales feed exclusively on fish (primarily Chinook and Chum Salmon) and cephalopods, while Bigg’s Killer Whales feed primarily on marine mammals. Offshore Killer Whales are the least understood of the three ecotypes, but are believed to primarily consume fish, with shark species comprising a significant part of their diet.

The Resident Killer Whale ecotype is comprised of two distinct populations: the Northern Residents and the Southern Residents. Although members of these two populations may overlap in range, they have not been observed to interact and genetic studies suggest that the two populations rarely-if ever-interbreed. The Northern Residents range from southeastern Alaska down to southern Washington State. The greatest majority of encounters are from the coastal waters of the Canadian Pacific. A portion of the population is regularly found in Johnstone Strait and southeastern part of Queen Charlotte Strait (and adjoining channels) during the summer and fall. The Northern Resident population has grown steadily in size since the 1970s, and in 2014 the population numbered 290 individuals. Over the last forty years, the population has experienced an average annual growth rate of 2.2%; however, lingering conservation concerns exist for this population, given its small population size and low potential rate of increase.

Killer whales have been observed in all oceans of the world, but they generally concentrate in colder regions and in areas of high productivity. They are found in all three of Canada's oceans, but appear to be less common in the Atlantic and Arctic. In the Canadian Pacific, they have been observed throughout almost all marine waters, including many long inlets, narrow channels and deep embayments, as well as occasionally up brackish river channels. Northern Resident Killer Whales frequent the waters of Johnstone Strait and southeastern Queen Charlotte Strait on most days during July through October. Perhaps the most important aspect of habitat for the Northern Resident Killer Whale is the availability of prey. Northern Resident Killer Whales are dietary specialists, feeding primarily on fish. Chinook Salmon (Onchorhynchus tshawytscha) is the predominant prey species taken by resident populations during May to August, but Chum Salmon (O. keta) is more prevalent in their diet from September to October. The acoustic environment is also an important element of their habitat; an ocean quiet enough for the transmission and reception of their echolocation clicks and vocalizations is essential for navigation, foraging, cultural and social purposes. A behavior unique to the Northern Residents is “beach rubbing”, where whales enter relatively shallow habitats to rub against pebble substrate on sloping shores. When undertaking this behaviour, they are very sensitive to disturbance. Critical habitat is described in the Recovery Strategy for the Northern and Southern Resident Killer Whales (Orcinus orca) in Canada (http://www.sararegistry.gc.ca/document/default_e.cfm-documentID=1341).

Killer Whales are delineated into ecotypes, between which distinct prey preferences and unique vocal dialects have led to reproductive isolation and genetically distinct lineages. This cultural and reproductive isolation may also occur within an ecotype, where lineages may share similar prey preferences and habitat but exhibit different vocal dialects, as seen in the Northern and Southern Resident lineages. As a result of over 40 years of study, the life history characteristics of Northern and Southern Resident Killer Whales are well known compared to all other ecotypes. Both males and females reach sexual maturity at 15 years of age on average. The gestation period of Killer Whales is typically 16 to 17 months, and the interval between calving is usually about five years (ranging from 2 to 12 years). Length of calves at birth ranges from 2.2 to 2.6 metres. Calving occurs year round, but appears to peak between fall and spring. Mortality rates vary with age; mortality from birth to six months of age has been estimated as being as high as 50%. The average life expectancy is about 50 years for females and 29 years for males.

The greatest threats to Northern Resident Killer Whales include a reduction in prey availability; exposure to contaminants from prey; toxic spills; acute acoustic disturbance (e.g. mid-frequency active sonar, seismic surveying, marine construction); and masking of vocalization and echolocation required for navigation, foraging, cultural and social purposes. Chronic acoustic disturbance, physical disturbance, interactions with commercial fisheries and aquaculture, direct killing and climate change are other human-related threats that have potential to jeopardize the Northern Resident Killer Whale population. Natural factors may also impact the survival of Northern Resident Killer Whales: diseases, fixed dietary preferences and corresponding decreases in prey supply, inbreeding depression (i.e. the genetic deterioration of the population due to breeding of related individuals), and mass stranding or natural entrapment. How current threats may act synergistically to impact Killer Whales is unknown, but in other species, multiple stressors have been shown to have strong negative and often lethal effects, particularly when animals carry elevated levels of environmental contaminants.

The Killer Whale, Northeast Pacific northern resident population, is protected under the federal Species at Risk Act (SARA). More information about SARA, including how it protects individual species, is available in the Species at Risk Act: A Guide.

A final Recovery Strategy for the Northern and Southern Resident Killer Whales (Orcinus orca) in was posted on the SARA Registry in 2011. A report on the progress of implementation of that Recovery Strategy is forthcoming. The objectives outlined in the Recovery Strategy form the basis for the Action Plan, which provides advice on specific activities or measures needed for recovery. Since 1973, Fisheries and Oceans Canada’s Nanaimo, British Columbia-based Cetacean Research Program has been conducting annual research on the populations and habitat use of Killer Whales. Significant progress has been made toward meeting many of the objectives and strategies outlined in the Recovery Strategy, including progress toward better understanding the year-round distribution, habitat use, and prey requirements of Resident Killer Whales, as well as the impacts of threats on them. Photo identification catalogues have been updated and annual censuses are ongoing. Population models have been updated for both Northern and Southern Resident Killer Whales, and a greater understanding of the demographics, interactions, and interdependencies between and within matrilines has been achieved. A transboundary effort was undertaken to examine the relationship between indices of Chinook salmon abundance and Resident Killer Whale populations; investigations into seasonal and annual dietary requirements are ongoing. Identification of contaminant levels in Killer Whales, their prey, and in sentinel species such as the Harbour Seal informed the development of a PCB food web bioaccumulation model. Evaluation of the Killer Whale acoustic environment, including noise maps and sound signatures for various vessel classes, has provided invaluable information about the quality of Killer Whale acoustic environment in different areas. Field research provides information on potential acoustic impacts to Killer Whales, and informs ongoing efforts toward the development of thresholds and effective mitigation protocols. These examples serve to illustrate the efforts undertaken to understand threats, characterize impacts, and develop effective mitigation in pursuit of Resident Killer Whale recovery. The effects of the recovery effort on a long-lived species are not likely to be immediately evident. Over the last 40 years, the Northern Resident Killer Whale population has experienced an average growth rate of 2.2%. Based on their low reproductive rate, recovery of Northern Resident Killer Whales can be expected to take multiple generations. Fisheries and Oceans Canada maintains an ongoing commitment toward the recovery of this species.