Scientific Name: Erioderma pedicellatum
Taxonomy Group: Lichens
COSEWIC Range: New Brunswick, Nova Scotia
COSEWIC Assessment Date and Status Change: November 2014
COSEWIC Status: Endangered
COSEWIC Status Criteria: C1+2a(i)
COSEWIC Reason for Designation: This species is believed to be extirpated from New Brunswick, and the remaining population in Nova Scotia is small. Intensive monitoring efforts over the past ten years indicate that both the number of occurrences and number of individuals are declining. These declines are projected to continue in the future. The main threats include habitat loss and deterioration as a result of forest harvesting, air pollution, climate change, and predation by introduced slugs.
COSEWIC History of Status Designation: Designated Endangered in May 2002. Status re-examined and confirmed in November 2014.
SARA Status: Schedule 1, Endangered
Date of Listing (yyyy-mm-dd): 2005-01-12 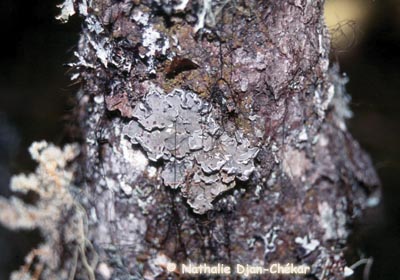 The Boreal Felt Lichen grows on the branches or trunks of Balsam Fir, Black Spruce, White Spruce, or very occasionally Red Maple trees. This “leafy” lichen is typically 2 to 5 cm in diameter, but it occasionally grows as large as 10 cm. The edges of the body of the lichen are slightly curled up, exposing the whitish underside. Overall the lichen appears either bluish grey (when it is well hydrated) or dark grey to greyish brown (when it is dry). Lichens are unusual creatures. A lichen is not a single organism as most other living things are; rather it is a combination of two organisms that coexist in a symbiotic (mutually beneficial) relationship. Most of the lichen is composed of fungal filaments, but living among the filaments are cells of a blue-green alga.

Typical habitat for the Boreal Felt Lichen is northerly exposed forested slopes where cool and moist conditions prevail throughout most of the year. These mature forest sites are also rich in moisture-loving species such as sphagnum mosses and Cinnamon Fern. In well-lit forests, the Boreal Felt Lichen is found predominantly on tree trunks' whereas in more shaded habitats it is found mostly on branches.

The Boreal Felt Lichen is long-lived, and the average age at which adults reproduce is about 30 years. Growth of a new lichen individual is the result of interaction between the spores of a mature lichen and an alga that is present in the environment. This alga is found in the water sacs of a small liverwort plant that also grows on the surface of the same trees as the lichen, and it has been suggested that new lichen individuals can only develop inside these liverwort plants. The presence of this alga makes the lichen particularly sensitive to acid rain and other pollutants. When the lichen grows on the particularly acidic bark of spruce trees, it has a reduced ability to survive when stressed by acidic air pollutants (compared to when it grows on fir trees). The sensitivity of the Boreal Felt Lichen to airborne pollutants could make it a good indicator species for air quality. The Boreal Felt Lichen has been called the “Panda Bear” of the lichens. International interest in this ancient life form has resulted in an appeal from the International Association of Lichenology to the Government of Newfoundland and Labrador for the protection of the lichen and its habitat.

The most serious threats to the Boreal Felt Lichen in Nova Scotia are air pollution, acid rain, and deforestation.

The Boreal Felt Lichen is listed as a vulnerable species under the Newfoundland and Labrador Endangered Species Act.

The Boreal Felt Lichen is listed as critically endangered on the Red List of Lichenized Fungi of the World (International Committee for the Conservation of Lichens, Salzburg, Austria, 1996).

Recovery Team for the Atlantic population of boreal felt lichen

Summary of Progress to Date Recovery projects are engaging municipal governments in order to explore valuable opportunities and tools that would benefit species at risk and their habitat, including the Boreal Felt Lichen. These governments also have been encouraged to engage in stewardship and monitoring activities. Only one site of Boreal Felt Lichen was known at the time of the original listing and now 9 sites are known based on recent inventories. Unfortunately, it is believed to be extirpated in New Brunswick, but recovery efforts are still ongoing at the known sites in Nova Scotia. The few landowner contacts that have been made have been very positive so far with the landowners agreeing to protect known Boreal Felt Lichen sites. Bowater Mersey Paper Company Limited, a forestry industry company, has been very helpful in supporting recovery planning efforts. Summary of Research/Monitoring Activities Habitat suitability maps have been generated using a Geographical Information System (GIS) model based on habitat characteristics of known Boreal Felt Lichen sites. Habitat and environmental data is collected from all new Boreal Felt Lichen locations and is used to continually improve the GIS mapping data. Information on plant condition, maturity, and size also is collected and is a good indicator of habitat desirability. Global Positioning System (GPS) is used to mark the location of these new sites. New found location information is incorporated in the Nova Scotia Department of Natural Resource's, Significant Species and Habitats Database, the NS Department of Environment's Protected Areas Database, and the Atlantic Conservation Data Center. This information is then applied in land use planning such as environmental impact assessments, research and in coordinating forest harvesting activities on crown lands. Summary of Recovery Activities Municipalities are provided with habitat conservation, recovery, and species at risk information and resources in order to make informed protection and restoration decisions. Information is shared between recovery teams, municipal government, and other non-government organizations to incorporate municipal perspectives in recovery planning and stewardship activities. Pamphlets and identification cards on Boreal Felt Lichen were published in 2003 and distributed to forest stakeholders with the intent of increasing the protection of felt lichen sites. GIS maps also are distributed to private and government forest managers and staff with the intent of encouraging them to participate in the mapping of Boreal Felt Lichen and implement management activities to prevent habitat loss. Alternative management practices in Boreal Felt Lichen habitat are being considered and include the development of managed buffer zones compatible with the survival and recovery of the lichens. URLs Sierra Club of Canada:http://www.sierraclub.ca/national/programs/biodiversity/forests/campaign.shtml?x=332 Species at Risk in Nova Scotia:http://www.gov.ns.ca/natr/wildlife/endngrd/