Scientific Name: Tetraneuris herbacea
Other/Previous Names: Hymenoxys herbacea
Taxonomy Group: Vascular Plants
COSEWIC Range: Ontario
COSEWIC Assessment Date and Status Change: May 2021
COSEWIC Status: Special Concern
COSEWIC Status Criteria:
COSEWIC Reason for Designation: This perennial herb occurs only in the Great Lakes region where it is restricted to rare alvar and lakeshore calcareous bedrock habitats. Ninety-five percent of the world population is in Canada. This species may be very abundant where it occurs, and a few large subpopulations on western Manitoulin Island buffer the level of risk to the rest of the population. On-going threats include fire suppression, trampling by pedestrians, off-road vehicle use, building and road construction, quarrying, logging in adjacent forests, and invasion by exotic species. The change in status since the last assessment is the result of increased search effort and a change in interpretation of severe fragmentation.
COSEWIC History of Status Designation: Designated Threatened in May 2002. Status re-examined and designated Special Concern in May 2021.
SARA Status: Schedule 1, Threatened
Date of Listing (yyyy-mm-dd): 2005-01-12 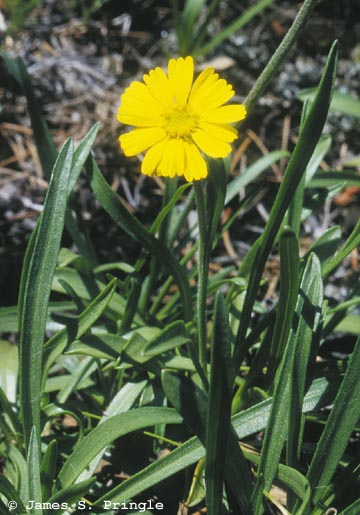 The Lakeside Daisy is a small perennial herb with one or more leafy rosettes (a round cluster of leaves) that grow from a dense tuft at the base of the plant and can each be up to 10 cm tall. The narrow leaves appear to have no stems. Mostly linear and somewhat fleshy in appearance, they become dark green and moderately hairy at maturity. The flower buds form in the fall and bloom the following spring as a solitary golden blossom on a short stalk. The bright yellow flowers are very striking against the plants’ relatively barren limestone habitat.

The Lakeside Daisy is a rare endemic (species restricted to a given area) of the Great Lakes region, with 95% of its global range in Canada. Thirty-eight populations are currently known from two large, relatively undisturbed regions in Ontario, the Bruce Peninsula and southern Manitoulin Island. In 2000, the number of flowering adults per population ranged from 3 to an estimated 3 540 000. The total size of the Canadian population is probably not changing appreciably; however, populations that have been monitored in the most heavily traveled areas are noticeably declining.

The species is predominantly found in alvars. These sparsely vegetated habitats are characteristically flat, receive a high amount of sunlight, and have sparsely distributed soil on top of dolomite or limestone bedrock. Lakeside Daisies mostly grow in the cracks of the limestone, or on tufts of low-growing vegetation (such as mosses). The habitat is wet in spring and fall and moderately dry in the summer.

The Lakeside Daisy spreads via rhizomatous (underground stem) growth and/or branching of the woody persistent stem. In Canada, it flowers from early May to early July and is pollinated by insects. The species is self-incompatible, which means that it is unable to produce seeds when pollinated by pollen from the same plant or any other genetically similar individual. When pollination is successful, seeds are produced approximately three weeks after the flowers bloom. Seeds are dispersed primarily by gravity but may also be influenced by wind and animal grazing.

Quarrying activity and cottage construction are rapidly reducing the amount of suitable habitat available on private property, while human traffic is adding to the damage incurred in public areas. Trampling on shoreline habitat and the conversion of alvar habitats into camping areas are examples of threats to the species in Bruce Peninsula National Park. Naturally occurring herbivores (seed-eating insects, rabbits, birds, and deer) eat Lakeside Daisies. The alvar habitat is also rare and may be experiencing increasing climatic stresses. There appear to be suitable unoccupied habitats within the species’ geographic range. It is not known whether the absence of the Lakeside Daisy from these locations is due to the poor ability of the plant to disperse, or to environments that are unsuitable for its establishment.

More than half of the populations also receive some level of protection due to their occurrence inside a national park or a privately owned botanical preserve.

Summary of Progress to Date Recovery for the Lakeside Daisy is addressed in the National Recovery Strategy for the Alvar Ecosystems of the Bruce Peninsula and Manitoulin Island Regions in Ontario, which was produced by a multi-partner recovery team. The team is co-chaired by the Ontario Ministry of Natural Resources (OMNR) and Parks Canada, with support from Environment Canada. There has not been a significant change in Canada’s overall population of Lakeside Daisy, though declines have been observed in populations situated in heavily traveled areas. Summary of Research/Monitoring Activities The International Alvar Conservation Initiative (IACI), coordinated by The Nature Conservancy’s Great Lakes Program office in Chicago, Illinois, studied alvars across their range in North America and produced detailed, standardized field inventories of the majority of significant alvar sites in Ontario, Michigan, New York and Ohio. An ecological theme study of Ontario alvars was conducted in 2000 by the Federation of Ontario Naturalists (FON). This project looked at alvars in the Ontario context, collected additional field data, ranked sites, and made recommendations on conservation. Population monitoring and inventory work is ongoing on both Manitoulin Island and the Bruce Peninsula through a variety of funding mechanisms and partnerships. Most recently, Parks Canada completed a detailed Lakeside Daisy inventory at Bruce Peninsula National Park in 2006. Lakeside Daisy habitat mapping on the Bruce Peninsula also was completed in 2006. The OMNR invites the public to report sightings of rare species, including the Lakeside Daisy, on their website. In support of the Recovery Strategy for the Alvar Ecosystems of the Bruce Peninsula and Manitoulin Island Regions in Ontario, a number of previously unsurveyed alvar sites in the Bruce Peninsula and Manitoulin Island regions were inventoried during the summers of 2004- 2006. Summary of Recovery Activities Several key alvars have been protected in the last 10 years. Further site ranking exercises were recently completed for both the Bruce Peninsula and Manitoulin Island in order to prioritize areas for conservation and protection. Priorities are linked to stewardship opportunities. At Bruce Peninsula National Park, Misery Bay Provincial Nature Reserve, and private nature reserves such as the Bruce Alvar Nature Reserve, management has focused on maintaining the integrity of alvar habitat. This has included routing trails away from sensitive areas and construction of boardwalks. The boardwalk at the Bruce Alvar Nature Reserve was constructed entirely by volunteers. On Manitoulin Island, conservation efforts have resulted in the protection of the new Queen Mum Park and the FON Quarry Bay Nature Reserve. Education and communication with landowners is ongoing. An atlas focusing on important conservation areas in the Bruce Peninsula, including alvar habitat, was released in November of 2005 by the Wilderness League chapter of Canadian Parks and Wilderness Society (CPAWS), in partnership with many other organizations. This atlas has been distributed to industry developers and is available to the public on the internet. A considerable amount of public contact and education about alvars has taken place, mostly due to the IACI. Hundreds of landowners with alvar habitat were contacted when permission was sought to survey their lands for the IACI. This was followed up with stewardship packages given to many of these landowners. Through this effort the word "alvar" has become a familiar term in common usage in the Bruce Peninsula and Manitoulin Island region. Various media publicized alvars during the IACI’s Alvar Workshop in June 1998. The Nature Conservancy Canada (NCC), the FON, and The Nature Conservancy – Great Lakes Program have featured alvars in their publications and on their web sites. Education and outreach materials focusing on Ontario species at risk, including the Lakeside Daisy, have been developed and distributed on the internet by Ontario MNR & Ontario Nature. URLs: Ontario Ministry of Natural Resources: Natural Heritage Information Centre Factsheet:http://nhic.mnr.gov.on.ca/MNR/nhic/documents/brochure.pdf Ontario Ministry of Natural Resources: Report a Rare Specieshttp://nhic.mnr.gov.on.ca/MNR/nhic/species/species_report.cfm Ontario Biodiversity: Species at Riskhttp://www.rom.on.ca/ontario/risk.php?doc_type=fact&lang=&id=290 CPAWS: Bruce Peninsula Atlas: (available for download)http://www.cpaws.org/community-atlas/bruce.php