Scientific Name: Thamnophis sauritus
Other/Previous Names: Northern Ribbonsnake (Great Lakes population)
Taxonomy Group: Reptiles
COSEWIC Range: Ontario, Quebec
COSEWIC Assessment Date and Status Change: November 2012
COSEWIC Status: Special Concern
COSEWIC Status Criteria:
COSEWIC Reason for Designation: The Great Lakes population is relatively widespread and appears to be locally abundant in a few sites. However, quantitative data are lacking on population size and trends, and most information is anecdotal and from protected areas.  Wetland and shoreline habitat loss and road development continue at an alarming rate within their range and present a significant threat to the species. Unless those losses are reversed the species is at risk of becoming Threatened. Road mortality and habitat loss are widespread and much of the species distribution occurs in pockets of habitat surrounded by agricultural land, roads and shoreline development.
COSEWIC History of Status Designation: Designated Special Concern in May 2002. Status re-examined and confirmed in November 2012.
SARA Status: Schedule 1, Special Concern
Date of Listing (yyyy-mm-dd): 2005-01-12 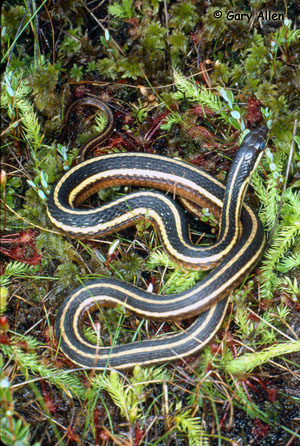 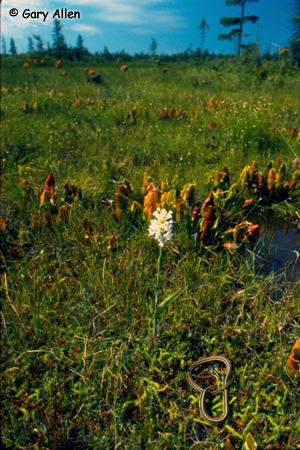 The Eastern Ribbonsnake is a small, slender semi-aquatic snake with a long tail. It can be identified by its black body with three, longitudinal yellow stripes, two lateral and one dorsal, running the length of the body. The side stripes occur on the 3rd and 4th scale rows. Below the stripe, the scales are caramel to rusty brown. There is a vertical white line in front of the eye. (Updated 2017/06/06)

Eastern Ribbonsnakes range from southern Canada to Florida, east of the Mississippi River. There are four recognized sub-species of the Eastern Ribbonsnake; of these only the Northern Ribbonsnake (T. s. septentrionalis) occurs in Canada. Eastern Ribbonsnakes occur at the northern limit of their range in Canada, where there are two geographically distinct populations that are each considered a designatable unit. The Great Lakes population occurs in southern Ontario and extreme southern Quebec and is contiguous with the species’ main USA range. The Atlantic population is isolated and restricted to southwest Nova Scotia. (Updated 2017/06/06)

Eastern Ribbonsnakes feed mostly on amphibians and small fish. They appear to feed throughout their active season, although feeding modes and prey may vary seasonally with amphibian activity. Courtship and mating generally occur in spring, although fall mating may also occur. Eastern Ribbonsnakes give live birth to 2-26 young in July or August. Eastern Ribbonsnakes can reach maturity in their second or third year. Generation time is likely no more than 4-6 years. Eastern Ribbonsnakes in Canada are constrained by temperature. They bask in exposed sunny spots to gain sufficient heat for movement, gestation and digestion. They take refuge in water, under vegetation, beneath cover objects and in shrubs to avoid overheating and to escape from predators. (Updated 2017/06/06)

Loss of wetland habitat and development of lakeshores are increasing, particularly in Ontario. These changes can lead to habitat fragmentation, degradation and loss. Increased road development and traffic frequency, greater likelihood of negative interactions with people, increased predation by pets, and increased introduction of exotic species are also threats associated with anthropogenic development of shorelines. Critical information on population size and trends is still lacking which could prevent recognition of overall population decline and impacts of threats. (Updated 2017/06/06)