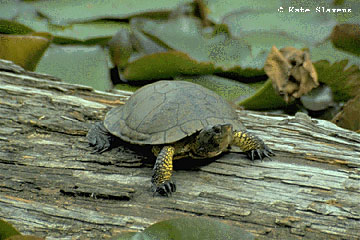 The name marmorata is derived from the latin word marmor, which means "marble". It describes the marble patterning on the carapace (dorsal shell) of this medium-sized turtle. In both adults and young, the carapace is olive, dark brown, or black with varying degrees of mottling. The plastron (ventral shell) is yellowish with dark blotches, and the skin colour is grey. Unlike many turtle species, male and female Pacific Pond Turtles are similar in size; the carapace of adults is 9 to 18 cm long. Young turtles have a rough carapace, while adults have a smooth one and a relatively longer tail.

The Pacific Pond Turtle is at risk throughout its range. Historically, this species occurred along the west coast of North America from southern British Columbia to Baja California, Mexico, and inland to Nevada. Currently, the main distribution of this species is in coastal California and Baja California, with isolated inland populations. The Pacific Pond Turtle was common in the ponds and lakes of southern British Columbia and Vancouver Island in the mid-1800s, but no sightings have been recorded in Canada since 1959.

The Pacific Pond Turtle is found in slow-moving streams, large rivers, sloughs, and occasionally in brackish water. It is found in water bodies with rocky as well as muddy bottoms and prefers areas with emergent vegetation. It requires deep pools with large woody debris to provide refuges from predators. The Pacific Pond Turtle experiences seasonal drought in portions of its range, and can apparently survive by migrating to persisting pools and estivating (laying dormant) in the mud. Nest sites are in dry, open areas, and this turtle will overwinter in both woodland areas and under water.

This species reaches maturity at approximately 8 to 10 years or at a carapace length of 13.5 to 14 cm. Eggs are laid between May and August. Clutches laid later in the season may spend the winter as hatchlings, or the development of the embryo may be suspended until favourable conditions are met the following spring. Pacific Pond Turtles look for food primarily at sunrise. They eat a wide variety of foods (algae, plants, insects, crustaceans, fish, and frogs) and will also scavenge on dead animals. While basking, Pacific Pond Turtles will aggressively defend their place in the sun, sometimes even pushing a smaller turtle off its perch. Maximum age estimates vary considerably, but this turtle can certainly live more than 20 years in the wild.

This species was subject to unrelenting commercial harvesting for food in the late 19th and early 20th centuries, which caused a significant decline in overall population numbers. Habitat has been, and continues to be, modified or lost as agricultural and urban development increase in North America.

The Pacific Pond Turtle is listed by the World Conservation Union (IUCN).